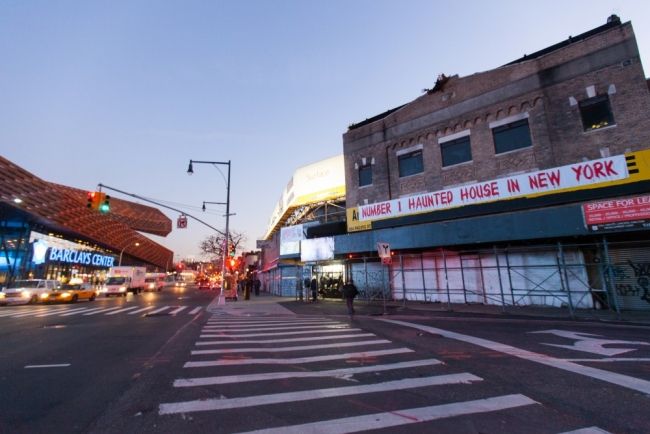 Most of us have heard plenty about Atlantic Yards, the ongoing Brooklyn megaproject. But whatever became of the complex deal-making that made the immense development possible? In Forefront this week, New York-based journalist Dan Rosenblum talks to community leaders to find out how the agreements that led to the project have (and haven’t) been felt on the ground.

Atlantic Yards sits blocks in either direction from well-to-do brownstone belts, low-income housing projects and the density of Downtown Brooklyn’s business and retail corridor. Accordingly, economic differences are just as stark. Median incomes in Park Slope routinely top $100,000, but only reach $9,650 in the nearby census tract that includes the Ingersoll and Walt Whitman housing projects, making them the second poorest in New York. Gentrification has redefined the neighborhoods as well. While an artisanal mayonnaise store opened last year blocks away from the Barclays Center, people in Brooklyn receiving income support rose five percentage points from 2005 to 2011. These historically black neighborhoods are also getting whiter, as longtime residents flee for East New York, Canarsie or even other states.

It was in this environment that, in the summer of 2005, Bloomberg and Ratner stood at a park near the Brooklyn Bridge to announce the creation of a community benefits agreement (CBA), the first of its kind in New York. With them were leaders of eight community-based groups who signed the 73-page document that promised affordable housing, local hiring and community programs. In many cases, the groups gave institutional blessing in exchange for operating funds.

Dating from the late 1990s, CBAs are a popular instrument in the urbanist tool belt, helping to negotiate benefits for the communities directly affected by a development. “Covering a lot of issues and having a lot of groups sign it is what lets the CBA have credibility as having addressed the most important issues to the community,” said Julian Gross, a California-based lawyer, who has helped negotiate at least a dozen agreements.

CBAs have been used in all sorts of purposes, such as a $2.8 billion light rail project in Atlanta, a cancer research center in New Haven, Conn. and a casino in Philadelphia. But for many observers, the model CBA came from a 2001 mixed-use expansion near the Staples Center in Los Angeles. Deals within the agreement, signed by a coalition of more than 30 groups and unions, included $100,000 in seed money for workforce development programs, $650,000 interest-free loans for non-profit housing, $1 million for nearby parks, living wage guarantees and more. So far, it’s largely been regarded as a success.

The high-profile Brooklyn CBA laid the groundwork for the city and state’s support of the project, which amounted to about $300 million, not including tax exemptions.

The CBA’s boosters often compare it to the Staples Center agreement, but there are indicators that it will yield a different result. One stark comparison can be made looking at the groups of signatories and the operations they ran. Seven years after the Brooklyn document was signed, five of the groups have been mostly silent or reconstituted after without much fanfare.

BUILD, which closed in November, can be seen as a symbol of the CBA’s role so far. It graduated 36 apprentices in a construction program, but in November 2011 seven of them sued the organization, as well as Caldwell and the developer. The apprentices alleged a bait-and-switch, claiming they worked for free for two months to build a Staten Island house in exchange for union cards that never appeared. According to the complaint, no Barclays construction jobs were offered to the group, which included experienced carpenters and electricians living in Brooklyn. Instead they were offered temporary political canvassing or retail jobs, paying a fraction of the construction jobs.

Since the seven plaintiffs initially filed the suit, about a dozen more apprentices have joined it, according to Matthew Brinckerhoff, an attorney at a Manhattan-based law firm helping to represent the case. He expects the next phase could come later in the year. (Caldwell has asserted that BUILD guaranteed job interviews, but jobs were never promised to anyone in the program.)

The other groups remain operational but have few solid achievements beyond memories of Ratner-funded summer camps, air conditioning units, ball games or concerts. These charitably acts are certainly kind gestures, but they haven’t added up to the structural or systemic cooperation that happens in L.A. or other cities with CBAs.

“These people provided cover for Forest City Ratner to suspend all zoning, and then they go back on their word and now they just go away,” said Jim Vogel, a spokesman for Brooklyn State Sen. Velmanette Montgomery. “They got their arena.”

In 2010, a task force led by the city comptroller studied CBAs in New York and noted that similar agreements — signed when building the new Yankee Stadium, a retail complex in the Bronx and Columbia University’s Manhattanville expansions — “were negotiated in a context where no clear and generally accepted standards existed, which allowed critics of the projects to question their credibility.”

Tom Angotti, an urban planning professor at Hunter College, was a member of that task force. “It considered different opinions and different views of community benefit agreements,” he said. “But I think the majority of [the task force] agreed that in New York City, [CBAs] have been hijacked by developers and by pro-development advocates.”

“From the developer’s point of view,” he said, “it’s a good tactic for minimalizing opposition and opening the way for minor concessions: Buying off opposition or buying off sectors of the community by throwing around some free tickets to a Jay-Z concert, or whatever.”