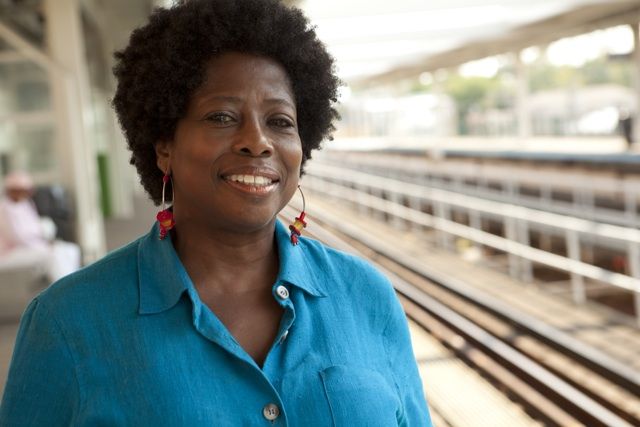 An alliance of Los Angeles advocates hope to convince local officials to use $40 billion, allocated for a light rail upgrades in L.A. County, to commission companies who promise to hire and train workers in the U.S. — and especially in low-income like areas like East L.A. In Forefront this week, Nona Willis Aronowitz sets out to see if trains and transit are the key to restoring long-gone manufacturing jobs in Southern California and beyond.

On a Monday afternoon in July, in a modest suite of offices nestled in a brick building just west of downtown Los Angeles, Madeline Janis prepares for an important meeting. As national policy director for the Los Angeles Alliance for a New Economy, known as LAANE, Janis has been working on an ambitious plan to bring tens of thousands of manufacturing jobs back to the U.S. The plan has nothing to do with educating consumers about locally made products. Janis is not advocating tax breaks for corporations to build factories here. And she’s not simply touting the benefits of the “Buy America” procurement act, which requires that transit agencies using federal money buy from companies that produce 60 percent of the total value of the vehicle in the country. In fact, Janis doesn’t think the loophole-riddled law goes far enough — not by a long shot.

Instead, she’s about to sell a conference room full of 30 or 40 local activists on the idea that the return of highly skilled, well-paid manufacturing jobs hinges on using public dollars that already exist. Specifically, she has her eye on $40 billion allocated to improve L.A.’s mass transit system with new light rail cars, after Los Angeles County residents voted for Measure R, a half-cent tax increase over 30 years. It’s a huge sum that, if harnessed correctly, could be used to commission companies who promise to hire and train workers in the U.S.

The details are a complicated jumble of legal stipulations, incentives and budget breakdowns. But the sentiment is simple, resonant and oozing with patriotism: Why not use the billions already pledged for transit manufacturing to create jobs for Americans, particularly low-income people of color who typically miss out on these opportunities? “We’re paying for that with our fares, with our tax dollars,” Janis says. “We should have the jobs that go with them.”

Janis’ intuitive idea represents a 180-degree turn away from how government has produced and purchased goods for the last several decades. Typically, when a city wants to invest in a set of Acela trains or a new fleet of buses, the job goes to the lowest bidder, whether that’s the factory in town or one in Japan or Germany. Back in the 1960s, when one in four city jobs were in manufacturing, a region may have had several American companies to choose from. Nowadays, there are virtually no American rail car manufacturers and only one bus manufacturer that’s 100 percent U.S.-owned and -made — Gillig, in Hayward, Calif.

When a city or state puts out a call for new rail cars or buses, only foreign companies typically respond, and they take a large portion of the jobs — particularly the good-paying ones — back to their own countries. While some of the assembly is done in the United States at a few hundred factories, higher-value activities such as design and engineering are mostly performed overseas. As of now, rail car manufacturing and assembly only provide between 10,000 and 14,000 jobs in the United States. Bus manufacturing provides even less than that.

Janis and a loose coalition of advocacy groups in several major cities across the country are seeking to dramatically multiply that number, inspired by L.A.’s sudden “enormous infusion of resources” toward transit. According to Robert Puentes, a senior fellow with the Brookings Institution’s Metropolitan Policy Program, LAANE’s plan represents a “permanent shift in the American economy.” As of now, he says, this kind of advanced manufacturing accounts for about 11 percent of the economy — not big enough to replace the 6 million manufacturing jobs lost between 2000 and 2009, but “still important.”

”It’s an awful lot of what we export overseas,” Puentes says. His hope is that this “manufacturing renaissance” won’t only make products for use in the U.S., but in other countries as well.

Janis sees this plan as putting “meat on the bones” of President Obama’s constant calls for a new era of American manufacturing. In 2008, he talked of cracking down on China’s trade cheating. During the 2012 election, he pledged to add one million new manufacturing jobs to the U.S. economy (only about 12,000 have been created so far). Just a few days before this Monday meeting, Obama stood in an Amazon warehouse in Chattanooga, Tenn. and spoke of “high-tech manufacturing hubs” and incentivizing “new investment” in stirring yet vague terms.

LAANE’s idea is a promising answer to the president, an antidote to inadequate policies and squishy, patriotic calls to buy American. Although the 1982 “Buy America” Act requires that 60 percent of mass transit procurements be U.S.-made, there are myriad loopholes and almost no government enforcement. Local communities, meanwhile, aren’t yet organized enough to hold giant global companies accountable. Janis calls the law “completely insufficient.” She estimates that since component parts represent 80 percent of the cost of the vehicle, and since subcomponents can fly under the radar, only about 28 percent of parts are truly made locally. Based on studies LAANE has conducted on transit companies’ compliance, “the level of follow-through… is paltry,” Janis says.