Forefront Excerpt: Has Atlantic City Reached the End? – Next City 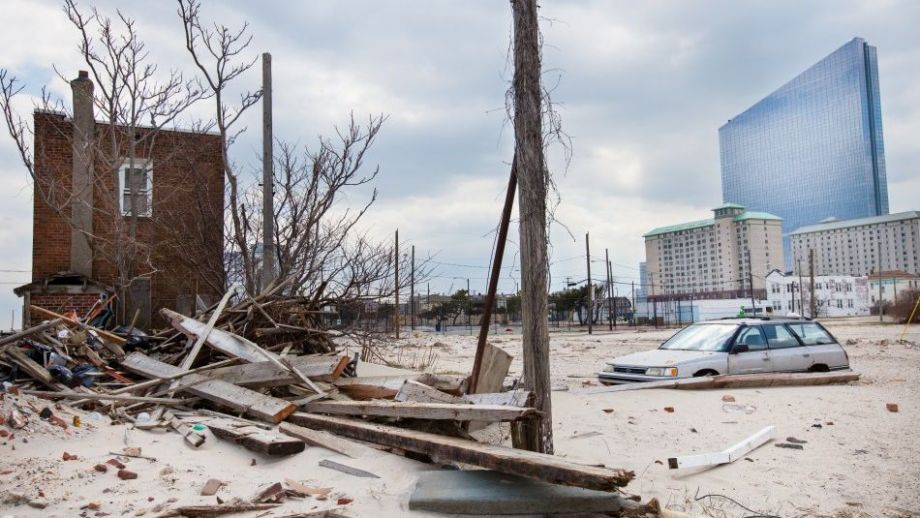 Atlantic City can’t seem to catch a break. Casino profits are falling, Hurricane Sandy left it crippled, its mayor is feuding with the New Jersey governor, and for once most people agree that the resort city needs to diversity its economy if it is to survive. In Forefront this week, Jake Blumgart explores America’s Favorite Playground to see if there’s any second (or third) change awaiting AC.

Slow business in Atlantic City has ripple effects throughout the state, hence Christie’s commitment to the ailing resort. New Jersey’s 1976 law legalizing casino gambling ensured that 8 percent of the casinos’ yearly gross receipts are earmarked to offset utilities and property taxes for elderly and disabled residents. A 1984 law created the Casino Reinvestment Development Authority (CRDA) and required casinos to pay 1.25 percent of their annual gross receipts to the agency for redevelopment of Atlantic City and other struggling areas of the state. Like most states, New Jersey is facing persistent budgetary issues in the wake of the Great Recession. Every revenue stream matters.

Shortly after taking office in 2010, Christie declared Atlantic City “a dying city.” But as he stood on the Boardwalk, surrounded by the mayor and members of the City Council, he paired his morbid assessment with a promise of state intervention to turn it into a more comprehensive resort, a “Las Vegas East.” Earlier the same day, Christie described Atlantic City’s “historically corrupt, ineffective, inefficient local government that has squandered hundreds of millions of dollars.”

In 2011 Christie signed legislation creating a Tourism District that empowered the largely state-appointed CRDA to take control of Atlantic City’s profitable core — the area around the casinos, Boardwalk and The Walk (a shopping district). Under Christie’s law, CRDA could determine land-use policy, make “public safety improvements” and use eminent domain (among other municipal responsibilities) within the 1,700-square-acre section of Atlantic City. Although he had at first expressed tentative support (before the details were clear), Langford denounced Christie’s move as “modern day apartheid,” a policy sure to heighten the divide between the casinos and the rest of Atlantic City.

“The governor and the Legislature have further divided the city into a ‘tale of two cities,’ whereas half of the city lies within the geographical boundaries of the Tourism District and the other half does not,” Langford wrote in an op-ed that ran in the local newspaper, the Press of Atlantic City. “The Tourism District will receive special consideration and additional resources. Conversely, the parts that are outside the district will not. Is this not separate but unequal?” Langford has a history as a pugnacious critic of casino-oriented development that forsakes the rest of the city. A 1996 New York Times article quotes him, as vice president of City Council, condemning casino redevelopment as a “Negro remover.”

CRDA does have a track record of funding casino-focused redevelopment while ignoring the city itself. (The agency did not respond to multiple interview requests for this article.) The authority’s board features very little local government representation: The mayor has a permanent seat but most of the other 17 members are state-appointed, including two casino representatives. To date CRDA has built 1,500 housing units in Atlantic City, but a 1997 investigative report from the Newark Star-Ledger found that “The authority has returned to the casinos more than a third of the money it has taken from them, by raiding funds earmarked for community development to subsidize $175 million in hotel expansion. When that money is spent, the CRDA will have built six times as many casino hotel rooms as houses.” Authority funds were also spent to boost the casinos in more indirect ways, including spending tens of millions of dollars bulldozing old buildings, regardless of displacement, and widening and beautifying streets — chiefly leading from the Atlantic City Expressway to the casinos — with shrubs and trees to block visitors’ view of the city as they drove to their gaming destinations.

Still, exactly two months before Revel opened, and a year after Langford’s denunciation of Christie’s legislation, CRDA released a 190-page Tourism District Master Plan, outlining a vision for Atlantic City’s future and summing up its issues in candid terms. Langford voted in favor of it.

Perhaps that’s because 35 years after legalized gambling came to town, everyone from cocktail servers to executives acknowledges that the city needs to attract people for reasons besides casino gambling if it is to survive. Authored by the real estate firm Jones Lang LaSalle, the Master Plan is forthright about the need to invest in infrastructure and amenities outside of the casinos. The plan borrows generously from the playbook of more progressive and affluent cities, with recommendations for bike lanes, farmers markets and non-gambling amenities like an indoor water park and a movie theater. There is talk of converting grim parking areas into glassy mixed-use complexes of shops, eateries and apartments or condos. (“The streets will come alive when interior activity spills out onto the sidewalk amid an inviting new landscape scheme,” the Master Plan enthuses about its dream version of Pacific Avenue, the main drag closest to the strip.)

The plan acknowledges that casinos themselves are complicit in the evisceration of any attractions, for residents or tourists, outside their own thick, windowless walls. “The basic casino design with their fortress like exteriors, massive parking structures and no ground level retail [have] added to the elimination of street life,” the report acknowledges.

Revel was meant to signal the reversal of this trend. Instead of drab buffets, the casino features stylish restaurants. Gamblers can actually see the outside world from windows where the gaming floor faces the ocean. The casino sports luxury spas and features high-profile concerts, including Beyonce’s first post-pregnancy show. But even with its variations on the traditional AC formula, the project still depended on the diminishing casino-tourism market.

“The thinking about Atlantic City is just as impoverished as the city itself,” says Bryant Simon, professor of history at Temple University and author of Boardwalk of Dreams: Atlantic City and the Fate or Urban America. “Who was at the table? The same people who have been at the table all along, so they suggested what has already been done.”