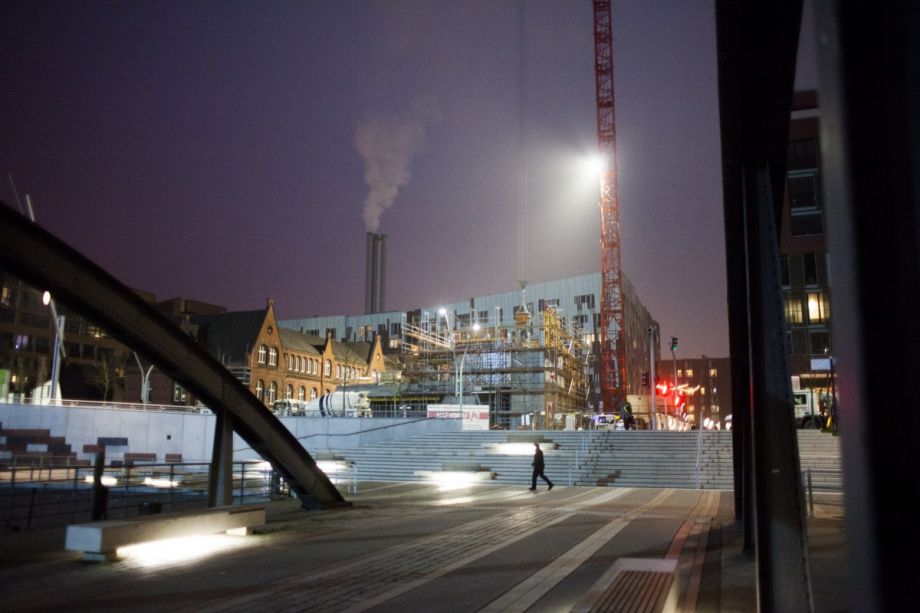 On the banks of the River Elbe in Hamburg, Germany’s second largest city, a brand new, mixed-use neighborhood is rising on what used to be a warehouse district. In Forefront this week, Nate Berg heads to HafenCity, as the project is known, to see if government really can engineer, from scratch, an authentic-feeling space where people at all ends of the spectrum can live and interact.

On the brick wall of a building beside the River Elbe in Hamburg, Germany, a small brass plaque reads “1962.” Above that is a horizontal line, and above that is the word FLUT. The line, about four feet off the ground, is the high-water mark of a flood that overwhelmed defenses and inundated about a fifth of the city, killing 315. It was the worst, though hardly the only, flood in Hamburg’s 1,200-year history.

The rising and falling of water is deeply enmeshed within the psyche of this city. Despite sitting nearly 70 miles inland from the North Sea, Hamburg sees a two- to three-meter rise in the Elbe’s tide daily. Following the tidal shifts is crucial in the city, which is home to the second busiest container port in Europe. The sea is its lifeblood, but its flood risk — increasing due to climate change — is a persistent worry in the back of Hamburg’s mind. It’s an intimate but fraught relationship between city and water, one that’s evolving in the face of rising sea levels and more frequent extreme weather events. The question of how this waterside city can coexist with rising tides has at least one possible answer in a new neighborhood developing just upriver from that brass high water mark.

HafenCity is a highly idealistic mixed-use, master-planned neighborhood rising on a 314-acre triangle of dilapidated and flood-prone harbor warehouse land. The ground level of the entire area has been raised more than eight feet to withstand the inevitable flooding of the foreseeable future. It’s a tabula rasa on a berm, and aims to dramatically rethink how neighborhoods are built.

Perched at the edge of Germany’s second largest city after Berlin, this new development is the biggest inner city redevelopment underway in Europe, slated to cost some $14 billion. (The city is driving the process, investing roughly $3.25 billion. Private investors will cover the rest.)

Situated on the harbor, or hafen, HafenCity is a highly designed, carefully orchestrated and aspirational neighborhood development that will increase the central city’s footprint by 40 percent. It’s a literal stone’s throw from central Hamburg and an obvious place for the city to grow. If all goes according to plan, the project will add housing for roughly 12,000 people and create office space for more than 45,000 jobs. And it’ll do it with a fair amount of pizzazz. Big-name architects like Jacques Herzog and Pierre de Meuron, David Chipperfield and Richard Meier have designed buildings there, ranging from a flashy symphony hall to chic condos to conservative-but-modern takes on the office building. As the fashion is these days, the buildings meet high standards for sustainability; the city has even created its own green building certification for the project. The streets are clean, the walkways are pleasant and the outdoor spaces have the smooth finish of a corporate plaza outside a downtown skyscraper. Now about half-built, the neighborhood is the architectural equivalent of a storefront window full of well-dressed mannequins. Most are wearing stuff you probably wouldn’t, but they look good — in a conventional sort of way, at least.

Hamburg is a city of 1.8 million in a metro area of about 5 million. Only about 2,000 people currently live in HafenCity, and that scarcity is noticeable. There is a fair amount of people working there, but overall it feels like a part of town residents haven’t quite figured out yet. It’s on its way, though. Buses rumble through its streets, groups of skateboarders wax up curbs in public plazas, and cafés serve cappuccinos. A recent report in a Hamburg-themed issue of the French magazine Geo purported to find HafenCity’s first homeless person, an unemployed immigrant metal worker named Kamil Kossakowski. To some, this was a sign that the neighborhood is becoming more like a real place. But it will take much more than that to turn HafenCity into the sort of area where people at all ends of the spectrum interact — a living, breathing urban space.

Over the next 12 years leading up to the project’s full build-out in 2025, 12,000 residents and 45,000 jobs are expected to come and fill in the shell of HafenCity. It’s a future upon which the city of Hamburg is betting heavily.

HafenCity is one of the most ambitious urban redevelopment projects now being built across the world. Its peers are the largest megaprojects in cities like Seoul, where $28 billion is going toward a Daniel Libeskind-designed waterfront business district, or New York, with its $12 billion Hudson Yards development. The goal is to create an entirely new section of Hamburg’s downtown over the course of 25 years, converting city-owned former warehouse land serving the river port into a neighborhood. Part of the project’s logic is simple housing demand: Hamburg saw its population grow by more than 100,000 between 2000 and 2012 and has struggled to build new housing stock to keep pace, causing housing costs to soar.

“If you really want to slow down prices, you need to build new flats,” says Wolfgang Schmidt, state secretary of the city of Hamburg.

Meeting the demand for housing is only part of the project’s mission. Hamburg wants HafenCity to become its own global mini-city, a vibrant, diverse and thoroughly modern neighborhood that will lure international investors, tourists and residents. It’s Hamburg’s answer to Dubai, to New Songdo, to West Kowloon, to SoHo — places reinvented (or just invented) as dreamy urban settings to appeal to a globetrotting class of the moneyed elite. In early November, the Urban Land Institute named HafenCity winner of the 2013 ULI Global Award for Excellence, a sign not only of its perceived success in creating an international destination but also its likely economic prowess.

Winning awards, however, may prove to be the easy part for HafenCity. To create a community from nothing, its developers are employing a complex approach to social engineering that, if it works, could provide a model for other urbanizing areas. If it doesn’t, well, the state of Hamburg could end up losing billions of dollars. With so much at stake, the state has made sure to maintain a high degree of control over the physical parameters of the neighborhood, choosing an innovative yet hardline approach to standards of architectural, environmental and urban design. On paper, it is a seeming case study for how a democracy can build a city from scratch in the 21st Century.

On the ground, though, many questions still linger about whether this approach can create the type of neighborhood Hamburg wants, and whether instant large-scale urban development can be alchemized into a living, organic place.