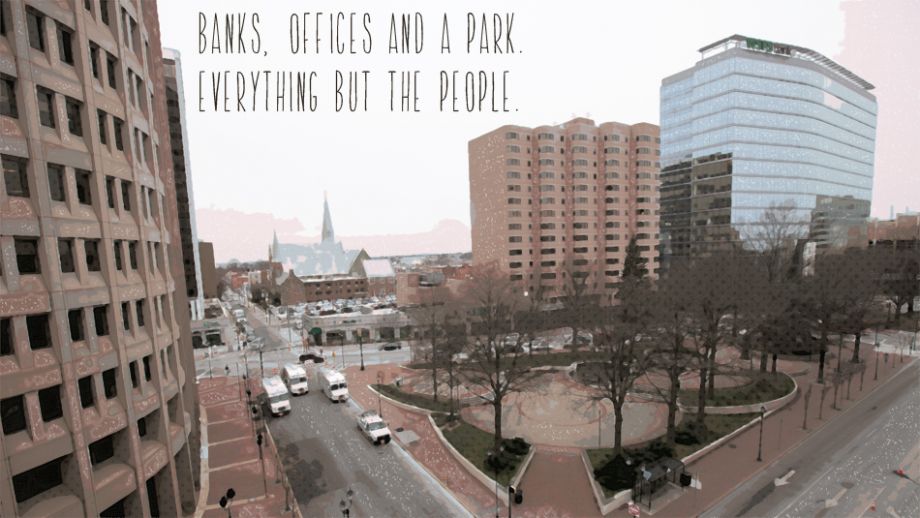 In Forefront this week, writers Greg Scruggs and Jake Blumgart head to the Corporate Capital of the World, where unemployment stands at 11.3 percent, to find out if it’s possible for Wilmington, Del. to ever have a “there” there.

For most travelers, by rail or road, Wilmington, Del. is little more than a skyline on the Northeast Corridor, forgotten as soon as it is passed. The names adorning the stumpy skyscrapers are blandly familiar: Barclays, Citibank, Bank of America, JPMorgan. Wilmington’s identity as a hub for the banking and credit card industry hasn’t given it much of a tourist or hipster cache. There isn’t even a Wilmington-based television show to joke about.

Walk downtown and it’s not all that easier to discern a local identity. The central business district is just that and nothing more. There are majestic historic buildings and a few trendy restaurants. But the city’s flagship coffee chain, Brew HaHa!, closes its downtown locations at 5pm. Even during the workday, sidewalks don’t have the buzz of human interaction found in nearby cities like Philadelphia and Washington, D.C. Evenings are downright moribund. If any activity does exist, it is sure to be captured on one of the most comprehensive CCTV camera network in downtown America.

“Occasionally the playhouse or the hotel has an event, but even then people just scurry in and scurry out,” says Reverend Douglas Gerdts, pastor of First & Central Presbyterian Church on the northwest corner of Rodney Square, the seat of wealth and power in Wilmington. “You show up on a Saturday and there’s nobody on any street anywhere. There’s just nothing.”

In the livelier section of downtown’s Market Street, it’s easy enough to find the imprint of affluent 21st-century urbanity: espresso bars, tapas lounges, loft apartments and arts institutions. Local merchants and economic development types have even rebranded the area “LOMA” — that’s SoHo speak for “Lower Market” — but the district is small and quickly drops off into an anonymity of parking lots and blank-faced office buildings. A visitor strolling through the city would be hard-pressed to guess that the region is home to more than half of all publicly traded U.S. companies and more than 60 percent of Fortune 500 companies. Among those that have a return address in Wilmington are Google, Coco-Cola and General Electric.

A century-plus history of loose regulations has made Delaware — and by extension its largest city — corporate America’s preferred address. Exceedingly lax incorporation laws allow companies to set up shell fronts here and escape taxation in states where they actually do business. Last year, 90 percent of all new initial public offerings were incorporated in Delaware. In March, the state celebrated the incorporation of its millionth active corporate entity. (By comparison, it had 917,092 residents in 2012.) That year, the Division of Corporation that administers business formations accounted for 26 percent of the revenue in the state’s general fund. It’s not hard to see why the office of the secretary of state stays open later than most of downtown Wilmington.

At a moment when cities are at the fore of a global conversation about the future, it’s interesting to turn to Wilmington, a center of U.S. trade like none other. It is a financial capital that has quixotically failed to become a capital of commerce. Money flows in and out but leaves remarkably few traces on the city. Research increasingly indicates that successful economies are bound to the specific conditions of place and that, in particular, a city’s long-term health is tied to the lived experiences of its residents. Wilmington is one where that relationship is largely broken.