Feature Excerpt: How Code for America is Changing the Way Cities Run – Next City

Feature Excerpt: How Code for America is Changing the Way Cities Run 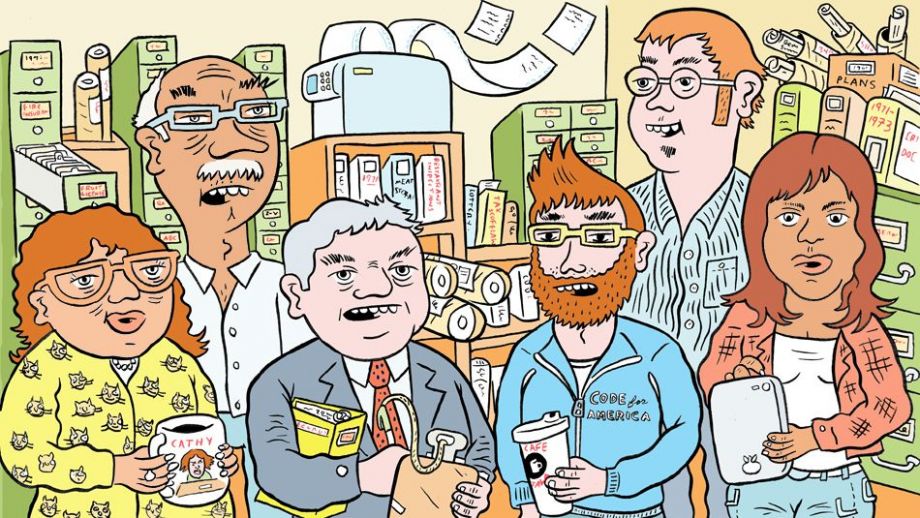 In this week’s feature, Nancy Scola goes inside the Code for America universe, talking to believers and skeptics alike to find out how the non-profit is evolving and what that means for the future of the civic tech movement — and cities at large.

Jennifer Pahlka is playing devil’s advocate. “You can’t,” she says, “solve the world’s problems through apps.”

I’ve asked Pahlka to pinpoint what might be the most relevant criticism of Code for America, the widely praised San Francisco-based non-profit she leads. Pahlka is wearing a peach parka, despite it being in the mid-60s this early April day. She’s got a cold, she explains, with one leg of her jeans tucked under the other, her backdrop the single biggest monitor I’ve ever seen on someone’s desk. But being under the weather does little to diminish her intensity. Pahlka, 40-something with a blond-brown pixie cut, has been walking me through Code for America’s bet: That bridging the gap between the thriving world of technology and the limping world of government can restore the public’s faith in politics and civil servants’ faith in public service.

Contrarian is a role that Pahlka has come to play with gusto over the last four years, as she’s turned an idea hatched over beers at a family reunion into a multimillion-dollar operation credited with helping to transform the relationship between governments and the people they serve. But there’s only so long Pahlka is willing to entertain the idea that the discrete bits of software her fellows build on behalf of cities are just inconsequential bits of software.

“No, of course you can’t,” she continues, on the potential for apps to save the universe. “But you can start a dialogue. You can figure out ways that give people new tools and get them re-excited about government. You can give people opportunities to be the agents of culture change.”

If culture change is what you’re after, Pahlka has a point. Just a handful of years ago she was busy organizing tech conferences. In late April, U.S. Chief Technology Officer Todd Park testified to me that, “Jen and Code for America really pioneered the whole idea of tech innovators coming into government to code a better government.” And just seven weeks after our interview, Pahlka will be named a deputy chief technology officer of the United States. Serving under Park, she’ll be responsible for heading the White House’s government innovation efforts, and part of her portfolio will involve leading the Presidential Innovation Fellowships.

It will be a familiar assignment. The White House launched the program last spring and was, according to Park, “directly inspired by Code for America.” The Washington stint will last about year, Pahlka says, making it a kind of fellowship of her own.

And it all began with apps. Pahlka pinpoints a moment when Code for America fellows, dispatched to city halls across the country, demo the open-source tools they’ve whipped up. “Government can look like that?” she says, describing the reaction of someone confronted for the first time with the simple but powerful transparency of, say, Where’s My School Bus?, a Boston-based app for parents to track their kids’ rides home, or the direct engagement possibilities of a Textizen, a mobile tool, designed for Philadelphia, that lets a city government easily survey its citizens.

If the fellows are missionaries, their New Testament is likely the 2011 bestseller The Lean Startup. In the book, tech entrepreneur Eric Ries advocates for quick cycles of “build-measure-learn,” a model for turning out software that fits end users like a glove. Their Old Testament is perhaps the U.S. Constitution. A poster on the wall of the Code for America headquarters in San Francisco reads, “We the people of the United States, in order to form a more perfect union” — rendered in the untranslated 0s and 1s of binary code.

But spend some time in the Code for America universe, and it quickly becomes clear that getting from even the savviest apps to perfecting the democratic experience is hardly as simple as point-and-click.