Forefront Excerpt: Are L.A.‘s Transit Plans Too Big for Eric Garcetti? – Next City 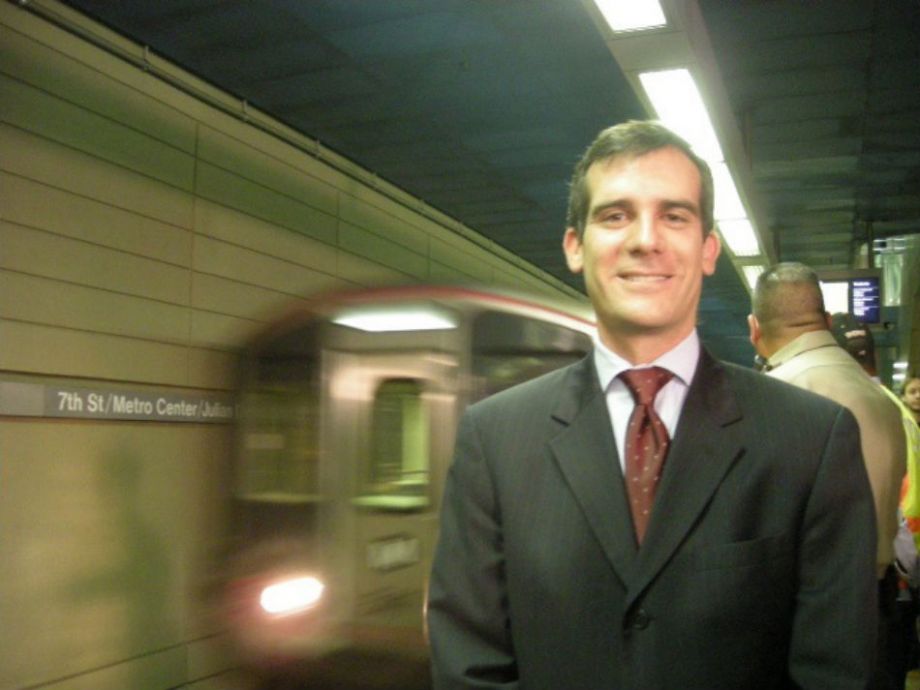 Until Mayor Antonio Villaraigosa, Los Angeles was a city dominated by cars, freeways and the worst traffic jams in the country. In Forefront this week, Nate Berg sets out to see if Villaraigosa’s successor, Eric Garcetti, will keep L.A. on track in one of the most dramatic turnarounds any American city has seen on its transportation front.

It’s Monday afternoon rush hour in downtown Los Angeles, and from a sloping bridge on 4th Street you can look down on the traffic creeping along eight lanes of the 110 Freeway below. It’s packed, and moving so slowly it might be faster to just get out and jog.

A few blocks away, there’s another, notably different scene. Hundreds of people are streaming in and out of the entrance of the 7th Street/Metro Center station, where four of the city’s train lines pick up. Business suits and people carrying bikes crowd down the stairs into one of the city’s busiest train stations. A line of buses turns the corner. Cyclists splice themselves between lanes of traffic. While the freeway hums in the near distance, Los Angeles has found new ways to get around.

Much anecdotal evidence suggests that more people, especially younger generations, are choosing to live car-free, in L.A. and beyond. Some data can back this up: Only 70 percent of 19-year-olds had driver’s licenses in 2010, a drop from 87 percent in 1983, according to a study from the University of Michigan’s Transportation Research Institute. Of those surveyed without a license, 22 percent said they had no plans of getting one ever. Nearly 20 percent said they prefer to ride transit or a bike. And another study from the Frontier Group and U.S. PIRG revealed that transit ridership had increased 40 percent since 2001 among people 16 to 34. Public transportation, once seen as a reluctant crutch for those with no other options, is becoming a first choice.

Earlier this fall there was some very visceral proof of the city’s transformation. Thousands of cyclists, skaters and pedestrians filled the streets in downtown L.A., taking over space typically dominated by cars. It was CicLAvia, a South American-inspired public space event in which miles of city streets are closed off to cars and opened up to all manner of non-motorized transport options. For a few hours on a Sunday, the roads of L.A. swarm with bikes, turning otherwise car-crammed arterials into an urban playground. The first CicLAvia, in October 2010, brought out an estimated 100,000 people, many experiencing the streets outside of a car for the first time. Though originally started as a trial, its popularity has led organizers to push for the city to allow the event more often. During the campaign, Garcetti pledged to make it permanent. There have been eight iterations so far, three of them this year. Organizers hope for four in 2014.

On a day-to-day basis, cycling has markedly grown in the city. There is no official city or county tally of cyclists, though one has been proposed, but a second-best option is the volunteer-run, biennial pedestrian and cyclist count conducted by the Los Angeles County Bicycle Coalition. In 2009, 14,222 cyclists and 62,275 pedestrians were counted. In 2011, those numbers rose to 15,115 cyclists and 76,740 pedestrians, increases of 6 percent and 23 percent, respectively.

Politicians are starting to catch up to these changing preferences. On the morning of July 2, Garcetti boarded the 92 bus near his home in the Silver Lake neighborhood to commute to his second day on the job at City Hall. Newly elected councilmember Mike Bonin also made an early commute to his new job on public transit. “Even if it’s just symbolism, the fact that they felt the need to, the fact that they thought it mattered [is important],” says Dana Gabbard, executive director of Southern California Transit Advocates.

These were minor press events for both officials, but indicate a new generation of political leadership. Garcetti’s commute is a small bit of visual evidence that he understands the potential of public transit and multimodality in the city.

During his campaign, Garcetti highlighted five major projects he hopes to either finish or have underway by the time he leaves office: Extending the subway down Wilshire Boulevard, the so-called Subway to the Sea; finishing the Crenshaw line, a rail line in the works to connect an underserved part of South Los Angeles; bridging the 1.5-mile gap between the Green Line rail spoke and Los Angeles International Airport; creating a north-south connector in the rail system, linking the forthcoming Crenshaw line to the expanding line along Wilshire; and building a tunnel for rail through the heavily congested Sepulveda Pass on the 405, site of the widely publicized 2011 weekend freeway closure known as “Carmageddon.”

While impressive, these big, shiny ambitions are to be expected from anyone coming into power in 2013 L.A. But for Garcetti, they are only a piece of the puzzle.