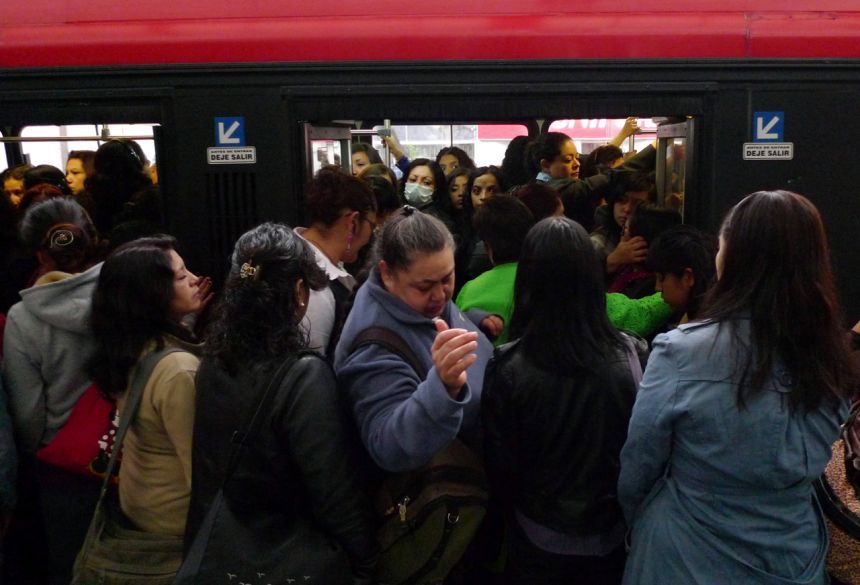 Jesús Padilla, 50, got his start as a hombre-camión — a microbus man — in 1986, and now directs one of the three companies that run the Insurgentes line, which is the most financially successful Metrobús line. The offices of Padilla’s company, Corredor Insurgentes S.A. de C.V., are tucked into Mexico City’s Santa María la Ribera neighborhood, a tough area where squatters lay claim to run-down buildings and residents operate businesses out of their apartments. In the office entryway hangs a black-and-white still of Mexico’s beloved Pedro Infante in the 1948 film We, the Poor Ones.

Padilla hands three cell phones over to an assistant, sits back and recounts how he and 261 other individuals holding microbus concessions decided to give up their peseros — Mexico City’s colloquial term for microbuses — and become “investors” in the city’s first Metrobús line. Characteristic of their mistrust of the government, nearly every hombre-camión was against the project, he says.

“It was fighting, fighting, fighting for two years,” Padilla says, remembering the bitter 2003 negotiations between the city and the transportistas that finally resulted in the creation of the Corredor Insurgentes company.

Before Metrobús, peseros sputtered and sped and jerked to sudden stops along the seemingly endless Insurgentes corridor, the old microbus Route 2, racing to pick up passengers whose pesos represented the busman’s daily earnings. (As a concessionary, the hombre-camión rarely doubles as driver; he hires someone else to run the route.)

The system, still in play in the vast majority of Mexico City’s corridors, undermined safety and offered no incentive for preventative vehicle maintenance.

“The interesting part was how to get them to trust [the project], get them to leave behind their business, which they supervised and controlled,” Padilla says.

Transportation guilds and unions wield substantial political power in Mexico City, and the hombres-camión represented a bloc of 2,300 operators who could paralyze the city if they chose to strike. But the city kept the Route 2 operators engaged through negotiations and offered an especially enticing carrot: stable earnings. All those who signed onto the Metrobús plan and agreed to unite formally as a partner in Corredor Insurgentes would be guaranteed a monthly dividend that amounted to roughly 80 percent of their average monthly earnings, or between 8,000 and 12,000 pesos ($620 and $930). In turn, the operators would turn in their microbus to be junked and recycled.

Not just Mexico City but the entire country is struggling with the question of formalizing informal markets. Employment in Mexico’s informal sector ranges between 50 percent and 62 percent of the country’s total employment, according to the World Bank’s recent jobs report, and is “considered high given the country’s development level.” In the capital, attempts earlier this year to formalize a largely informal trash collection system met with active resistance by the sanitation workers’ union, and plans were set aside.

Padilla cites the “determination and courage” of López Obrador in bringing the group on board. They didn’t like it at the time, he says, but today “everyone can see the benefits.” Among them: “A more orderly operation, a centralized administration, preference for preventative maintenance, and the professionalization” of the operators.

Padilla’s self-described right-hand man, Guillermo Hernandez, also a former hombre-camión and today part of Corredor Insurgentes, says that the reorganization cut down earnings for the transit contractors, but also made their job easier.

“In the microbus scheme, you could earn a little bit more,” Hernandez says. “But we’re really bad administrators, so you earn more but you’re not better off.”

Yet the microbus culture isn’t easy to shake. When most of the company partners grudgingly handed over their Route 2 vehicles, Hernandez says, they simply bought a different pesero on another route. Every day, 22,000 peseros still rumble into the streets.

Whether commuters jump off a moving pesero as it swerves suddenly into traffic, or try to shove their way onto a packed Line 1 bus, or suffer in their cars the solitary frustration of gridlock, getting around the city at rush hour is especially challenging.

Daily commutes are also the largest source of smog in the metropolitan area.

The Mexico City metropolitan area generated 51.5 million tons of greenhouse gases in 2008, according to the latest data available from the city’s environmental agency. Some 44 percent of those emissions — the greatest of any sector — is due to transportation, with 23 percent attributable to individual vehicles.