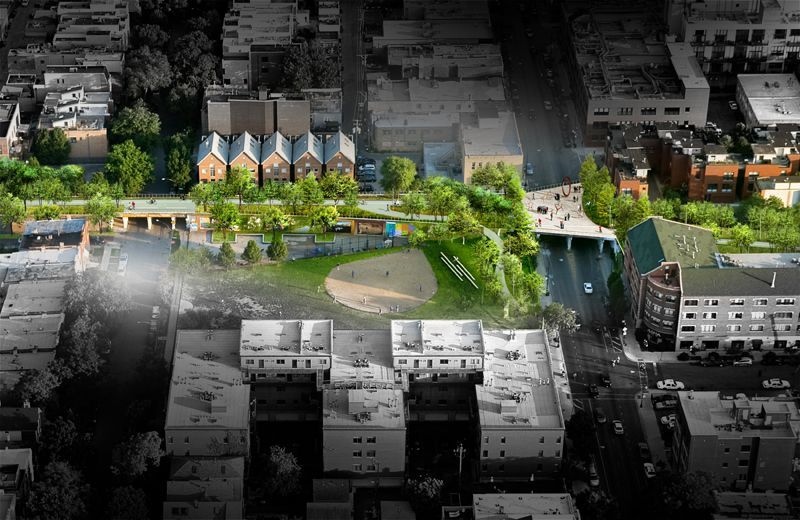 There’s no denying that the High Line, New York City’s famed elevated park, has captured the imagination of planners, designers and local leaders everywhere. But might it prove too seductive a model for other cities? In Forefront this week, David Lepeska turns to Chicago’s Bloomingdale Trail, an abandoned railroad trestle likely become the nation’s second elevated urban park, to see which ribbon of green will lay the groundwork for future of public space.

On a blustery, overcast January afternoon, Steven Vance, a cycling advocate and writer at Streetsblog Chicago, shimmied on top of a short stone wall at Julia de Burgos Park in Logan Square and clambered up to the train tracks. As with the High Line before it was remade, North Siders have been sneaking onto the Bloomingdale Trail (which, at 16 feet high as opposed to the High Line’s 30, allows for easier trespassing) for years, using it as walkway, romantic aerie and summer nightlife spot.

Wildflowers like those that made [High Line project co-founder Robert] Hammond swoon were rare, but the tracks were overrun with long grasses. More than a dozen full-grown trees lined the edge of the trail. Not surprisingly, the tracks were strewn with bits of trash and the occasional beer can.

Strolling east, the vantage was akin to riding on the third level of a triple-decker bus floating slowly, and without interruption, through the neighborhood: Overlooking cars zipping up and down broad, stately Humboldt Boulevard, children playing outside a school near California Avenue, half a dozen locals chatting while dodging each other’s pets in the dog run at Churchill Field Park.

That strong link to the community has been key since the park and trail idea emerged in a 1997 city planning document. Five years later, and two years after the last freight cars chugged down the tracks, the city began planning for a multiuse trail linking the neighborhoods of Bucktown, Wicker Park, Logan Square and Humboldt Park. For the most part, these are gentrified North Side districts, home to thousands of youngish, well-educated singles and families and filled with boutique shopping outlets, stylish cafes, lively bars and even a few Michelin-starred restaurants.

Pulitzer Prize-winning playwright Tracy Letts and celebrity chef Rick Bayless live in multi-million dollar homes near the trail in Bucktown and Wicker Park, respectively. The real estate website Redfin recently ranked Logan Square as the eighth hottest neighborhood in America, citing a 94 percent increase in home sales in 2012. Humboldt Park has long been under-developed but has begun to see signs of gentrification. Koch credits the Bloomingdale for some of the recent uptick. “The area has already had disproportionate growth because people are conscious of what’s coming,” he said.

When it’s finished, the trail will connect the ‘L’ train’s Blue Line, which runs from downtown to O’Hare International Airport, to two Metra commuter rail lines, and link green, expansive Humboldt Park to points east. As designed by the New York- and Cambridge, Mass.-based firm Michael Van Valkenburgh Associates, five anchor parks will provide green space and access. The trail itself will include a concrete bike path, a softer jogging and walking path and an array of flora-heavy areas with benches and art installations.

Matthew Urbanski, a partner at MVVA and one of the lead designers, explained his firm’s approach to the project as “a creative editing of the structure, removing pieces where it expedites connection.” The local response has generally been positive. “It could be Chicago’s next great public space,” wrote Blair Kamin, architecture critic at the Chicago Tribune.

The evolution of the Bloomingdale has been a more public affair than that of the High Line, which was largely devised and shaped by a small group of supporters and their backers. Because it’s meant to link neighborhoods, and lacked private capital, the former sought, and found, broad community engagement.

Since 2008, the city, the Trust for Public Land and Friends of the Bloomingdale have organized dozens of neighborhood input meetings. In the course of those meetings, a clear desire for better transportation connections — as well as park space — emerged.

Project planners envisioned the trail as serving transportation needs and, in doing so, became eligible for federal funding. Enter $39 million in Congestion Mitigation and Air Quality Improvement funds, mostly from the federal government, with a small amount from the state. The funding stipulates the new park serve as a transportation artery.

This means the trail will be used very differently than the High Line. Visitor surveys in New York show that people generally do not use that park to go from point A to point B, and that more than half come to the West Side expressly to visit the High Line. Cycling on its landscaped paths isn’t allowed. In contrast, the Bloomingdale is poised to attract daily commuters, particularly bikers.

“The High Line is more of a museum-style walking path, more of a tourist spot,” Vance said as he looked down over Damen Avenue. “I think comparisons between the two are really weak. The Bloomingdale might raise some property values, but it’s not going to make all the vacant lots disappear. And that’s fine. This provides an asset these neighborhoods have needed, and a safe route to walk and bike.”

Beth White, head of the Chicago office of the Trust for Public Land and largely in charge of the effort to make Bloomingdale a reality, sees the High Line as an escape or secret garden, while the Bloomingdale is about connections. The park’s still-gestating second phase would connect the increasingly high-end western neighborhoods to ritzier lakefront areas via a quarter-mile extension to the east, beyond the Kennedy Expressway and across the Chicago River.

“The viaduct has for a long time been a divider between these neighborhoods,” White said. “The trail is going to connect them with five great little parks, add a bicycle system, and later link to the river and trails along the lakefront. For us that’s a very powerful thing, because it’s also an alternative transportation route that’s going to get people to work, to their friends, wherever they need to go.”