For Some in the Southwest, It’s Come to Selling Water to Fracking Companies – Next City

For Some in the Southwest, It’s Come to Selling Water to Fracking Companies 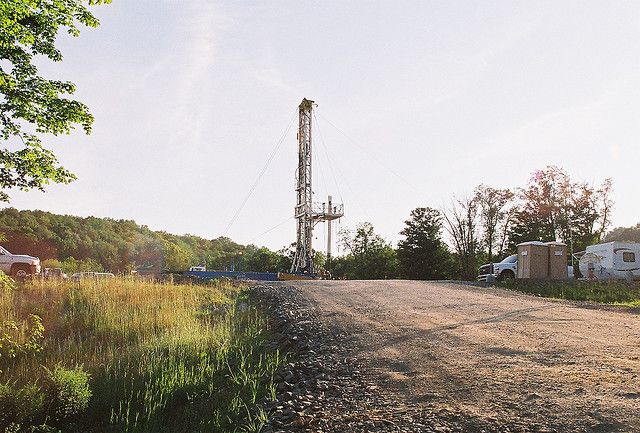 Hydrofracking requires up to 6 million gallons of water per well. Credit: Helen Slottje via Ari Moore on Flickr

Under the dry soil of Texas and New Mexico, there is shale oil. It’s a natural resource that has been touted as a solution to the country’s energy problem, a game-changing asset in the national portfolio. One Harvard researcher predicted in June that “increased shale oil production may significantly alter the U.S. energy outlook,” and that by 2017 the U.S. could be the top oil producer in the world.

To get that shale oil, energy companies have turned to hydrofracturing, popularly known as fracking. The nickname leaves out the “hydro” part, but make no mistake: Fracking requires water. Lots and lots of water, on the order of 4 to 6 million gallons per well.

And in the drought-stricken states of Texas and New Mexico, where the productive Permian shale formation has attracted swarms of drillers, water is in short supply.

Now lots of people in west Texas and New Mexico make money not by ranching and farming, as they once did. There’s not enough water for that anymore. Instead, they get by selling what water they have to fracking companies.

The Guardian ran a story this month about the small Texas town of Barnhart, which temporarily ran out of drinking water in July (not unlike the town of Magdalena, New Mexico, which I wrote about earlier this week). The town’s water problems stem a number of sources, including heavy agricultural use in the past and a drought that has stretched on for three years now. But the fracking hasn’t slowed:

Even as the drought bore down, even as the water levels declined, the oil industry continued to demand water and those with water on their land were willing to sell it. The road west of town was lined with signs advertising “fresh water”, where tankers can take on a box-car-sized load of water laced with industrial chemicals.

“If you’re going to develop the oil, you’ve got to have the water,” said Larry Baxter, a contractor from the nearby town of Mertzon, who installed two frack tanks on his land earlier this year, hoping to make a business out of his well selling water to oil industry…. He rejected the idea there should be any curbs on selling water during the drought. “People use their water for food and fibre. I choose to use my water to sell to the oil field,” he said. “Who’s taking advantage? I don’t see any difference.”

According to the Texas Tribune, a University of Texas study found that in Dimmit County, Texas, nearly one-quarter of total water used in 2011 went to fracking, a share that could rise to one-third if current trends continue. The study also showed that between 2008 and 2011, the amount of water used for fracking doubled statewide, and only one-fifth of that was recycled or brackish water.

In New Mexico, according to the Albuquerque Journal, landowners in the Carlsbad Irrigation District can’t sell water from their primary water source. But if they have what’s classified as a supplemental well, they can get a permit to do so. And that’s the course that many are choosing — somewhat ironically, because there’s not enough water provided by the irrigation district for them to continue farming.

“A lot of folks are doing that,” New Mexico Interstate Stream Commissioner Jim Wilcox told the Journal. “I can’t blame them. The Carlsbad Irrigation District doesn’t have the water the farmers need, and our farmers have to have some income coming in.”

“The oil and gas industry is requiring a lot of water and our concern is the effect it’s having on our aquifer,” he added. “We are concerned about losing water that can’t be recovered. Hopefully, we will get through this drought and everyone will be intact.”

The going rate for water is soaring in this part of New Mexico, up from 25 cents for a 42-gallon barrel seven years ago to $1 a barrel today.

The market is recognizing the value of water in an arid region where aquifers recharge very slowly — and not at all in drought years. The question is whether state regulators will follow suit, or just keep hoping for rain.