For Opponents of Detroit Highway Expansion, Being Heard Is a Victory to Itself – Next City

For Opponents of Detroit Highway Expansion, Being Heard Is a Victory to Itself 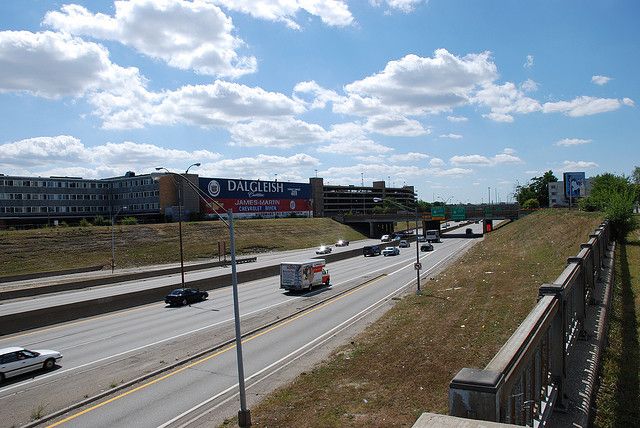 The forces widening a highway through downtown Detroit have gained too much power for opponents to reverse the project. But even juggernauts can take nicks from those who oppose them. And electoral politics can create drama, and discourse, even if they can’t stop a state-sponsored idea in a state-run city.

Two contests have thickened in Detroit as of late. One is the campaign to become mayor in a city without its own budget power. The other battle, by contrast, seems almost preordained: The setting of transportation priorities for Detroit and its neighbors.

On Thursday, the Southeast Michigan Council of Governments (SEMCOG) will meet for its annual confab where it will adopt spending plans for both the next three and the next 27 years. The state’s decision to spend nearly $2 billion to expand Interstate 94 through Detroit has come in for criticism, but the widening will almost surely survive.

The question is how transit and bike advocates can change discourse now that a prominent former mayoral candidate, Mike Duggan, has adopted their cause. Even though Duggan won’t appear on the ballot this year due to an issue with his residency, his opposition during his campaign helped spread pro-transit, anti-highway sentiment beyond its usual niche.

The long-established project to widen lanes of I-94, according to the Michigan Department of Transportation, aims at “reuniting communities” that sundered when the roadway went in. This means, per a video about the proposed plan that appeared in 2010, locating transit stops along the highway for safer bus travel and easier-to-cross overpasses.

To bike and transit advocates, it means vivisection. Mike Lydon, a Brooklyn-based planner who has worked in Michigan, excoriated the state for what he called a knowing hack at fragile neighborhoods.

Some locals agree. After the state agreed to take over Detroit’s management last year, a blogger known as m-bike wrote that the project encoded in the 2012 state takeover agreement would “wipe out 9 bridges over the expressways, including some pedestrian bridges, Third Street, and John R. It effectively widens the I-94 scar through the community.” The project as embraced last year, the blogger wrote, remains “mostly unnecessary.”

The post blamed the plan on a “1980s frame of reference.” Duggan, an executive who credits himself with rescuing Detroit’s mass transit, had echoed this idea during campaign appearances. His staff attended an anti-widening meeting in May. According to reporter Gus Burns, who live-blogged the meeting for the online news source mLive, Duggan’s campaign manager Bryan Barnhill pegged the widening as prelude to “the contraction and deterioration of Detroit.”

“It’s just not even logical for us to be focusing our planning resources and our time on projects like this that will perpetuate what we know will not work,” Barnhill reportedly said.

Meanwhile, SEMCOG’s draft blueprint for spending $36 billion in transportation revenues over the next 27 years pays little attention to transit and offers little in the way of support. None of that is surprising when you compare the region to other major metropolitan areas. Data from the National Transit Administration shows that, of the 25 largest metropolitan areas in the country, Southeast Michigan ranks 22nd in transit ridership, 23rd in hours and miles of transit service per capita and 22nd in total operating funds per capita.

If transit already lacks funds, and if the state which controls the city wants a highway project to move forward, then it seems like the best opponents can do is register their objection. The Detroit City Council passed a resolution opposing the I-94 expansion, as did lawmakers in nearby Ann Arbor. But since the ultimate decision belongs to SEMCOG, these are mostly symbolic victories.

Tim Fischer, deputy policy director at the Michigan Environmental Council, has lobbied against the expansion piece of the I-94 project, which also includes long-awaited repairs that will account for the bulk of the cost. While noting that he and other advocates have received a mixed response so far, Fischer said his hope is that SEMCOG will see that there isn’t a consensus on the highway widening and will leave room for compromise.

“There are different ways that SEMCOG can finesse this to get everyone on board,” Fischer said. “We’re hoping that some of these municipal resolutions, and the meetings that we’ve had with [SEMCOG] delegates, will raise these issues and that they will respond to them.”

In Detroit, budget-setters can bet on cars or on urbanism. They can’t count on recouping investment from anything anytime soon. So is it enlightened to espouse an old highway widening plan just when neighborhoods are starting to repopulate? Probably not. Is it logical? Heck, yeah.

Now, the Michigan Court of Appeals ruled on Tuesday that Duggan can’t run in the mayoral primary, so he won’t get the chance to find a way to fund bike safety or even transit. In any event, however, the election campaign has brought the city’s fulsome mix of urban failure and urban upsides to shine a light on other ways of thinking.

And there are other ways of using transportation capital. One alternative has taken shape right across the Detroit River in Windsor, Ontario. Sam Schwartz Engineering, a New York firm with urbanist bona fides, worked for Windsor on a “greenlink” that laid human-powered transport paths over a parkway.

The effort, now part of a C$1.4 billion overhaul of the Rt. Hon. Herb Gray Parkway, won a 2012 green innovation award from the American Society of Civil Engineers. A press release from the November ceremony quotes Windsor’s mayor, Eddie Francis, as saying, “Our project was driven by our community, who believed strongly that quality of life and transportation can coexist through smart design rooted in a sustainable and green vision.”

Recent mayoral debates in Detroit focused on the lack of plans to fill vacant houses, pay $6 billion in retiree health obligations and reduce cronyism. Some neighborhoods may cultivate their futures from the energy that Duggan’s campaign has released around urbanist ideas. But their future will have to coincide with a wider highway.