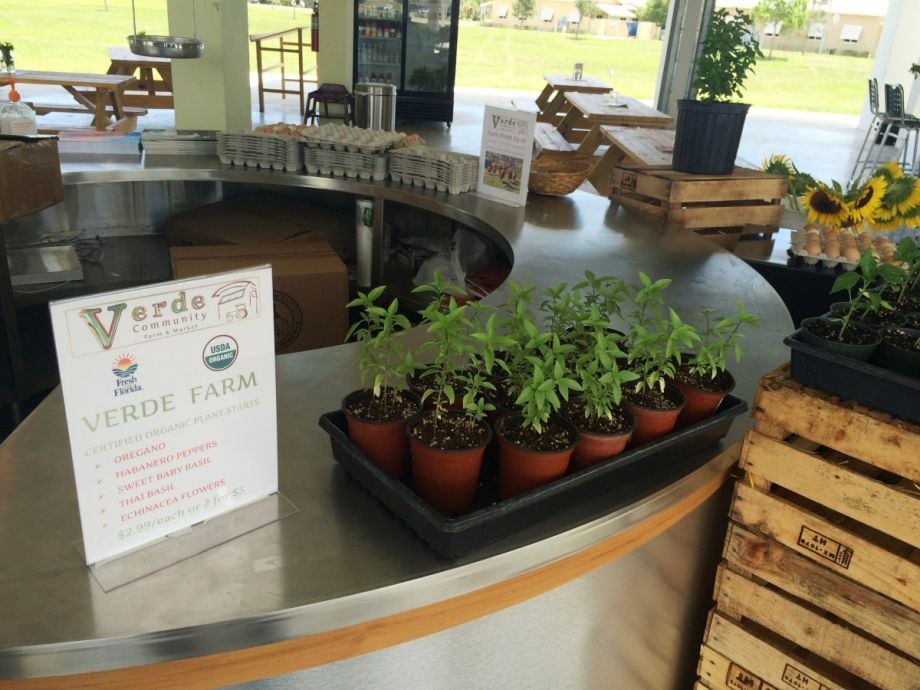 It’s safe to say the newest tactic for fighting homelessness in South Florida has never been attempted before: sunshine rolls. Lots of them. They’re being baked en masse at Miami-Dade County’s Verde Community Farm & Market, a supportive-housing community for more than 500 people in Homestead, which includes a working five-acre organic farm. Sort of like cinnamon buns for the Atkins-dieting crowd (heavy on the citrus instead of processed sugar), sunshine rolls are the crown jewel of Verde’s next phase, an open-air cafe, called Verde Kitchen, which is serving up a farm-to-table experience and job opportunities for people transitioning out of homelessness.

For years, the farm has sold its produce to some of the elite restaurants in Miami and Miami Beach, including those of James Beard Award-winning chef Michael Schwartz. But now, with the opening of the cafe and commissary kitchen, once-homeless residents are not only growing top-notch ingredients, they’re cooking and serving the cuisine themselves too.

“We’re creating a business model that’s so dynamic, hopefully we can get off the grant merry-go-round,” says Bill Squire, the Verde’s operations manager. He’s referring to the cafe’s potential contribution to a network of nonprofits that collectively pump life into Verde — where 145 families live, each with at least one member affected by a disability. The entire 50-acre complex sits on part of an old U.S. military base that was ceded to the Homeless Trust of Miami-Dade County, which in turn contracted Carrfour Supportive Housing to develop the residential project, which contracted Urban Oasis Project to train workers and manage them in farm operations, and now, restaurant work.

Squire believes Verde Kitchen will turn a profit. “Uniquely, we don’t pay rent, which is often a lot of your business costs as a restaurant,” he says. That, along with its proximity to an organic farm, allows the cafe to churn out low-priced artisan fare like the “soon-to-be-famous” sunshine rolls, star fruit popsicles, fresh-pressed juices, and grass-fed burgers — all of which he hopes will entice customers to spend a few bucks while driving down the Route 1 corridor on their way to Key Largo. They’ll either be drawn in by the good food, or the good cause, he says, because “when you spend money, you’re helping to hire and train individuals that are really in need.”

Though it’s only been open for two months — exclusively during lunch hours at that — the restaurant has created 10 new jobs. By November, it should expand to weekday breakfast and Sunday brunch, at which point upwards of 25 resident-workers will be employed there. So far, a handful of them have also been working ad hoc for local companies that rent out the space as a commissary kitchen. Clients include Farm Fresh Miami, which enlists seven residents to package shares for its organic buying club.

In time, Squire hopes resident-workers will move on to sous chef or server duties in restaurants around the area — or become clients of the commissary kitchen. “Right now we’re actually looking for a partner that could provide micro loans,” Squire says. The idea is to provide funding for residents’ micro-entrepreneurship ventures, products that could be sold at the market with assistance from Verde.

Loans are a necessity, given that few residents have access to a bank account or stable credit. Those are two of the many challenges they face in landing jobs outside of the community. Some haven’t been in the workforce for years, while others have never been fully employed.

Carrfour’s employment-training coordinators counsel residents on skills like interviewing and resume writing, but at Verde, getting a job is just one step of a bigger process. Even when residents are hired somewhere, families aren’t ushered out of their subsidized housing. “Employment is just one thing that our families need to stabilize and be able to move on,” says Stephanie Berman, CEO of Carrfour. “We encourage them to stay with us during the initial employment so that they can troubleshoot any ideas that come up.”

Gresia Gomez is an immigrant from the Dominican Republic who’s been living with her family of five at Verde for four years. Having previously worked as a line cook at Longhorn Steakhouse, Gomez is both at home in her new position at the cafe and meanwhile, is expanding her comfort zone.

“Here, it’s completely different. Everything is healthy, everything is organic,” she says. “I’m 33 years old and I’m actually learning how to eat healthy.” Now, Gomez dreams of one day opening a healthy Spanish-style restaurant that embodies some of the expertise she’s gained.

That plays right into Verde’s mission, Berman explains, of promoting physical and financial health as a means to restart the lives of homeless individuals in Miami-Dade: “To have the farm and healthy living permeate all aspects of these families’ lives, from what they’re eating to what they’re learning about and teaching their children, and also, to impact their employability skills and employment.”