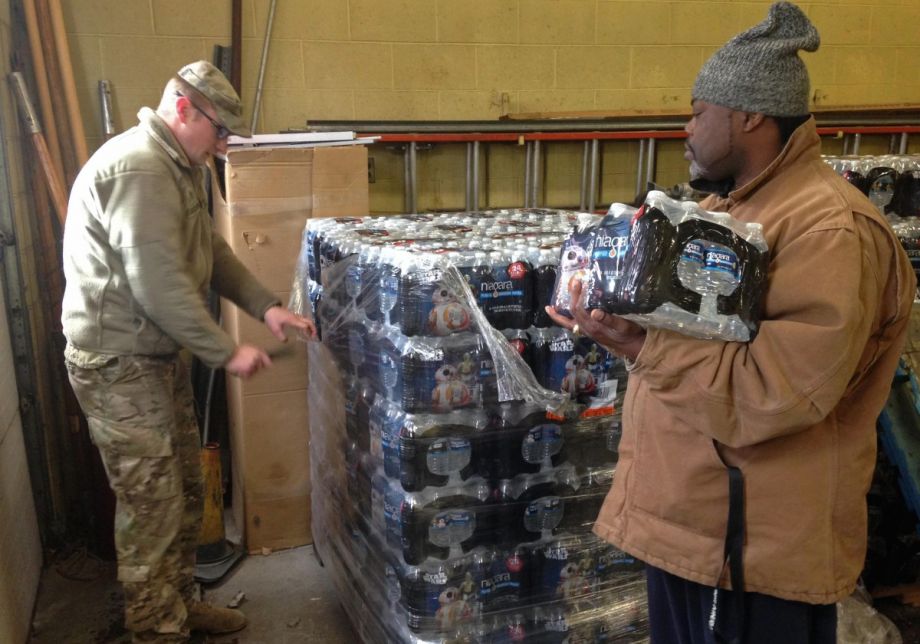 At the close of Sunday’s televised Democratic presidential candidate debate, after Hillary Clinton and her two opponents had exchanged barbs about her close association with Wall Street banks, and after they had gone ‘round and ‘round about gun control plans, Clinton chose a different subject for her closing remarks on the Charleston, South Carolina, stage.

She spoke of the Flint water crisis.

“I spent a lot of time last week being outraged by what’s happening in Flint, Michigan, and I think every single American should be outraged,” Clinton said. “We’ve had a city in the United States of America where the population, which is poor in many ways and majority African-American, has been drinking and bathing in lead-contaminated water. And the governor of that state acted as though he didn’t really care.

“He had a request for help that he had basically stonewalled. I’ll tell you what, if the kids in a rich suburb of Detroit had been drinking contaminated water and being bathed in it, there would’ve been action.”

Environmental justice has popped up in numerous local political campaigns through the years, occasionally making it to statewide elections. But on the whole, the issue — which the EPA defines as “the fair treatment and meaningful involvement of all people regardless of race, color, national origin or income with respect to the development, implementation and enforcement of environmental laws, regulations and policies” — hasn’t penetrated presidential campaigns beyond being an item mentioned near the bottom of the platform list. That will likely change in 2016 for two very important reasons: the Flint water crisis and millennial voters.

The environmental justice movement has long needed a more specific incident that puts government policy and decision-making in the forefront. In other words, less science jargon, more humanity. Flint, which changed its water source based upon costs, ignored warnings, and then saw lead levels rise in the children drinking that water, could be that national touchstone.

Yesterday, Michigan Governor Rick Snyder, a Republican, acknowledged the humanity of the problem — in terms of bad decisions of government officials — in a speech about who should bear the blame. “No citizen of this great state should endure this kind of catastrophe. Government failed you — federal, state and local leaders — by breaking the trust you place in us,” Snyder said in his State of the State address.

Millennials, those born between 1982 and 2004, have now eclipsed baby boomers (1946-64) as the largest age-based demographic in the country. And while their parents certainly have been on the forefront of the environmental movement, millennials tend to think of environmental issues more as a complete lifestyle matter. Boomers see a problem with the pollutants coming out of a pipe that flows into a river. Millennials contemplate why that pipe dumps into that river in the first place.

“Millennials of all races are seeing this as a key issue of how they want the country to move forward,” Tony Reames, a research fellow at the University of Michigan’s School of Natural Resources and the Environment, says. “The Flint water issue is one where citizens’ lives are being devalued based on their race and economic status. Do these citizens really matter, or are they just numbers … on a spreadsheet? That’s the issue younger voters are thinking about.”

Democratic presidential candidates especially are courting those young voters. Clinton’s campaign has rounded up celebs like Lena Dunham and America Ferrera for endorsements. Yet she was asked pointedly in Sunday’s debate about why opponent Bernie Sanders appears to have more millennials backing him than she does.

“When you want to influence and get the support of [millennials], you have to touch the issue of environmental justice in this election,” says Robert Bullard, dean of Texas Southern’s Barbara Jordan-Mickey Leland School of Public Affairs. “The younger voters are more spatially oriented, and they know that park design and transportation policy and air and water quality and how to use technology to create a cleaner world are all related. And how race and poverty levels influence those decisions. In this election, the candidates that address environmental justice will tap into that base of thinking, and will create an enthusiasm for their candidacy that will be striking.”

A slight downturn in youth and minority voter turnout is expected in the 2016 presidential election, mostly because President Barack Obama won’t be on the ballot. Luring younger voters at the 2008 and 2012 levels is a key for Democrats as they assess the path to victory in November.

“It has always been an issue with younger voters that you have to give them a reason to show up at the polls,” Bullard says. “What happened in Flint will be that issue. It is an issue that brings people of all races together. And in this election, where divisiveness seems to be a theme for the Republicans, bringing people together will be key for the Democratic candidate to get elected. It’s a choice about doing things the old way — placing a burden on people who live in certain areas — or doing things a new way where where you live shouldn’t matter.”

According to some political analysts, there are millennials who are leaning toward conservative economic policy because of poor job prospects and college debt. But these young voters may draw the line at supporting a Republican candidate who ignores an issue like the Flint water crisis and other environmental justice policy debates. The GOP’s Marco Rubio made headlines yesterday for telling reporters that he hadn’t been “fully briefed” on the Flint crisis.

“At this point, the Republicans won’t talk about this issue, other than Michigan Governor Snyder admitting mistakes were made,” says Brent Newell, legal director of the Center for Race, Poverty & the Environment in Oakland, California. “Senator Sanders has been front and center on the environmental justice issue, and I think that is one of the reasons he is doing better with millennials than Clinton is, according to the latest polls.“

“By using the Flint water issue as part of her closing statement at the debate, you can see how this issue is of extreme importance to Clinton and the Democrats,” Newell continues. “Obviously, Clinton is using the media attention to make a point and to get recognition as being associated with the environmental justice movement. But the Republicans are going to be making a big mistake is they ignore these issues, because the issue of environmental justice cuts across race and age lines.”