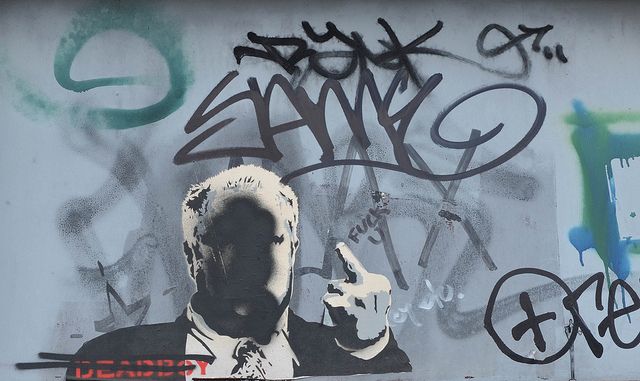 The likeness of Toronto Mayor Rob Ford flipping us the bird. Credit: Mary Crandall on Flickr

By now you have probably read about the alleged video portraying someone who looks like Toronto Mayor Rob Ford smoking crack cocaine. No media outlet has the video as of this writing — so if the thing exists, you can’t view it yet — but no fewer than three journalists at two different publications claim to have seen it.

Gawker first broke the story with editor John Cook’s account of how the website got a tip about the video, and how he traveled to Toronto to meet with the tipster and the owner of the footage. Apparently, the owner thinks he or she can net six figures from selling the video. (Cook writes that the owner has already gotten one $40,000 offer from an unnamed Canadian news organization, but rejected it.)

“Prior to the trip, I spent a lot of time looking at photographs of Rob Ford,” Cook writes. “The man in the video is Rob Ford.”

This morning, the Toronto Star followed up on Gawker’s story with a report from two of its journalists who say they have viewed the video three times. While conceding that they have “no way to verify the authenticity of the video,” Star reporters Robyn Doolittle and Kevin Donovan go on to describe the footage in detail. It makes for some colorful reading, at the very least.

Doolittle and Donovan write that the Star has not paid for the video, which they say clocks in at less than two minutes and whose owner they describe as a Somali man in his mid-20s.

If the Gawker and Star reports are true, then it explains the behavior of a first-term mayor whose every move since assuming office in 2010 appears to be oriented against the city of Toronto. I mean, what sober politician with his city’s best interests in mind would engage in the following?

As many corners of the Internet haven’t failed to notice, the last time a big-city mayor got caught smoking crack on video was 23 years ago, when then-Washington, D.C. mayor Marion Barry was arrested in a sting operation by the FBI. After serving six months in a federal prison, Barry made a political comeback, was elected to a fourth term as mayor and now serves on the D.C. City Council.