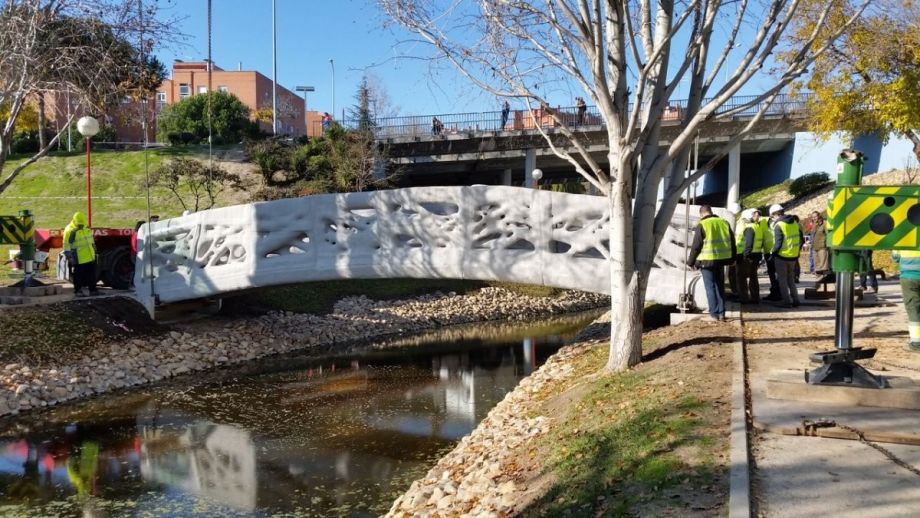 Alcobendas, Spain, this week unveiled a 3D-printed pedestrian bridge, reports 3ders.org, a 3D printing news site. The approximately 40-foot concrete bridge is made up of eight separate parts that fit together, and was created using an additive manufacturing process. It spans a small canal in Castilla La Mancha Park.

According to a statement from the Alcobendas City Council, the 3D printing process resulted in far less waste than normally produced while creating concrete structures, making it less expensive than traditional processes.

Large-scale 3D printing holds the promise of versatility — since structural elements can be created without molds or forms — and of sustainability, since raw material can often be recycled and fewer resources are required during manufacture.

Alcobendas’ bridge was printed from concrete by engineering firm Acciona and designed by the Institute of Advanced Architecture of Catalonia to resemble forms that occur in nature. The biomimetic bridge looks like it’s made of twisting branches or roots.

3ders.org suggests that the success of this project could lead to an expansion in 3D-printed street furniture, such as benches and trash cans.

In November, Metal Miner reported that Amsterdam is also getting closer to having its own 3D-printed pedestrian bridge, constructed of stainless steel.