Finding the Sweet Spot for a Sustainable Nonprofit Grocery in D.C. – Next City

Finding the Sweet Spot for a Sustainable Nonprofit Grocery in D.C. 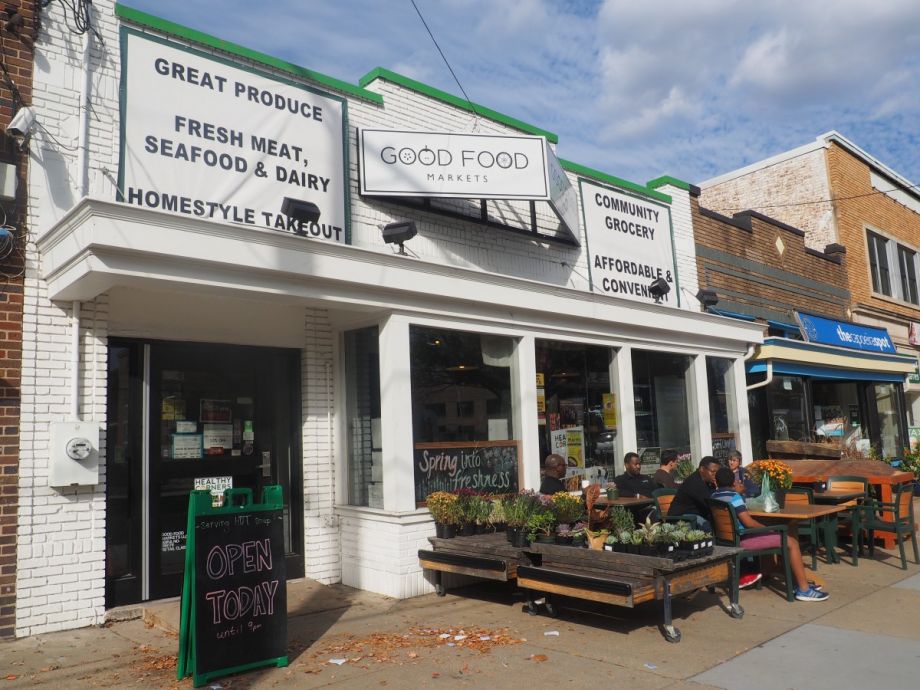 For years, Philip Sambol has wrestled with the question of how, exactly, to open a community-focused, locally-owned, non-profit grocery store in neighborhoods historically overlooked by traditional supermarkets.

With growing awareness and research around urban food deserts, he didn’t expect it to be so hard. He found a brutal and competitive business, with low profit margins that have long kept larger grocers out of low-income areas. But on the other hand, he learned how grocery stores play a crucial role in community development — beyond access to food — by serving as meeting places, sources of informal credit, and supporting workforce development.

Several years ago, as Sambol posed questions to food banks, public health departments, small-format and non-profit stores around the country, he was connected to Kris Garin, a D.C.-based journalist who had transitioned to the real estate business with a focus on projects in underserved communities.

“It was a food bank in Saint Joseph, Missouri, that connected us,” Sambol says. “We both called the same person asking all the same questions.”

That connection resulted in Good Food Markets, a 2,000-square-foot grocer that opened in January 2015 in the Woodridge neighborhood of Washington, D.C. Located on the main thoroughfare of Rhode Island Avenue, on a stretch long-considered a food desert, the store packs in everything from fresh fruit to prepared food by nonprofit DC Central Kitchen, local cheese, vegan products and craft beer.

And this January, the Good Food Markets team joined D.C. Mayor Muriel Bowser to break ground on a second store as part of an affordable housing development in Ward 8. In this area east of the Anacostia River, grocery stores are rare, with only one supermarket in Ward 8 and two in Ward 7, neighborhoods with a combined population of roughly 150,000.

Sambol easily rattles off reasons why it’s so difficult to get into the grocery business. “It is very low margin, highly competitive, highly cash and debt intensive, and very fluid — you see stores open, close, move, merge, get sold off, all those things,” he says.

That’s why, he notes, all the research on food deserts doesn’t always translate to stores opening in those areas. “The supermarket industry has grown to serve stores that are on average 43,000 square feet … huge stores that can generate a lot of revenue and serve a large amount of people in higher density, higher income areas,” he says. “When you shrink the size of the store, serving a smaller area, you are still at the mercy of a 2 to 6 percent net profit business.”

Sambol was unsuccessful in opening a non-profit grocer in the Lower Ninth Ward of New Orleans — he could not secure enough startup funding — and came to D.C. to try again with Garin.

Despite being Garin’s hometown, D.C. residents had already prompted a growing awareness of food justice and equitable food policy.

“We have found that the more the community stands up and asks for what it needs, and the more organizations have elevated this issue together, we’ve seen more [city] investment,” says Lauren Biel, who co-founded the nonprofit DC Greens in 2009. “D.C. has been a leader in making investments and recognizing those investments can’t be just surface treatments.”

At the first Good Food Markets on Rhode Island Avenue, the team knew the store had to be more than just a store. They sent community surveys, online and in-person, to help understand resident’s food buying decisions. They heard a desire for cooking classes, health education and opportunities in workforce development, which they worked into the business plan.

To get around the challenge of profit margins, Good Food Markets was developed as a social enterprise of the nonprofit Oasis Community Partners. They aimed for a small-format store that doesn’t require extensive management and can operate with a focused management team of employed, local residents. (The store also utilizes some volunteer work.) Still, the store is large enough to offer a full-service grocery offering.

Finally, to ensure funding and community support in their outreach efforts, they established a number of partners — including DC Greens — in funding, programming, service and retail.

For the second store, the affordable housing developer received an $880,000 grant through the Neighborhood Prosperity Fund, an initiative launched by Mayor Bowser, to support the buildout. The new store will span 3,800 square feet and include a 700-square-foot community space — inspired by community programming successes at the pilot location. It’s expected to open this spring with some innovations to the Good Food model, like a full-service kitchen and made-to-order service.

Community engagement is happening in Ward 8, too. “A new, purpose-built store in a brand-new building … you get a perception about what is in that store and who that store is for,” Sambol says. At the pilot location, some customers wondered if Good Food Markets was a product of gentrification that wasn’t for them; other customers didn’t expect a small store to carry organic food at the standard they desired.

“There’s a spectrum of the quality-conscious, price-conscious customer,” Sambol says. “As a grocer in a food desert, you have to be very aware of those differences and similarities, and try to find the middle ground.”

“Philip recognizes he’s coming from the outside, and there is a history of stores and farmers markets being a component part of displacement,” Biel says. “There’s an enormous amount of work that has to go into trust building. He’s been making strong efforts to build that trust.”

The model is expanding: the team is developing a Good Food Markets in partnership with the Boston Medical Center in Roxbury, Massachusetts. Sambol also hopes to grow in DC, as the city’s food justice priorities aren’t likely to wane.