Finding the Funding Needed to Protect Threatened Coastlines – Next City 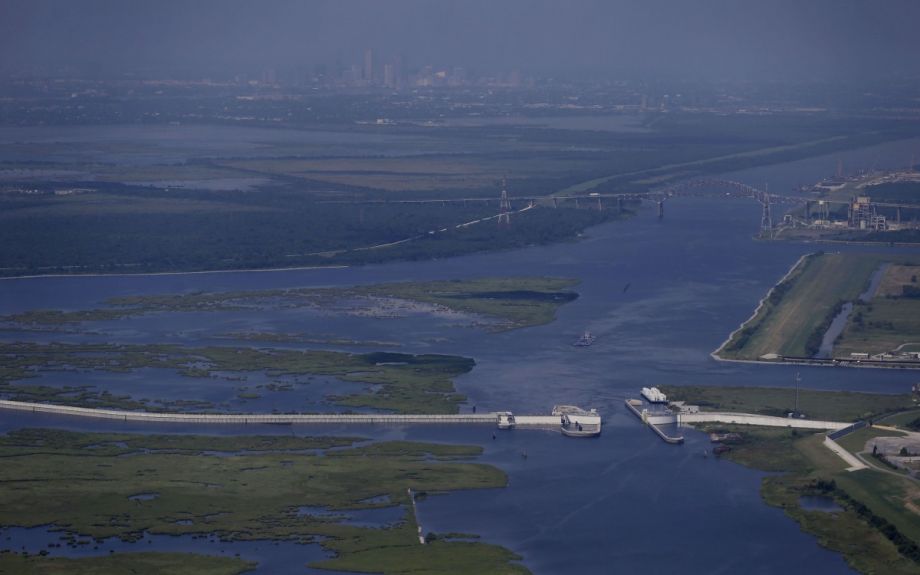 This aerial photo made during a flight provided by the National Wildlife Federation and Southern Wings shows the Lake Borne storm surge barrier in St. Bernard Parish, La., Monday, Aug. 10, 2015, which was built after Hurricane Katrina, with the skyline of New Orleans in the background. Scientists say Katrina was especially destructive because of the disappearance of buffer land between New Orleans and the Gulf. (AP Photo/Gerald Herbert)

Louisiana has a plan to shore up its disappearing coastline. The loss of coastal land threatens areas further inland, all the way to New Orleans, as the lands have historically served as buffers against storm surges — not to mention being an essential asset to the regional economy.

Since 1932, according to the United States Geological Survey, more than 2,000 square miles of Louisiana land have disappeared into the Gulf of Mexico. The loss of wetlands is a result of both sea-level rise and land subsidence, plus reduced sediment flow from the Mississippi River, which used to be strong enough to create new land fast enough to replace wetlands that were being lost, according to FactCheck.org. While the rate of loss has slowed somewhat in the last few decades, according to the U.S. Geological Survey, nearly 60 square miles of coastal wetland have been lost since 2010, and the state continues to lose land at a rate of one football field every 100 minutes.

As much as $3.6 billion in Louisiana business, residential, and infrastructure assets are at risk due to land loss over the next 50 years if no action is taken to protect or restore the state’s coast, according to researchers from Louisiana State University. The researchers estimate those assets support $7.6 billion in economic activity each year across the nation, not just in Louisiana.

The state, working through the Coastal Protection and Restoration Authority, developed a master plan to deal with land loss by completing projects that restore wetland areas and protect some of the region’s most vital economic assets.

“The problem is, it’s a $50 billion plan over 50 years, and if you look at things like inflation and if sea-level rise continues, it’s likely to be even more expensive,” says Shannon Cunniff, director of coastal resilience at the Environmental Defense Fund, a 51 year-old nonprofit that combines scientific and policy expertise to create and support solutions to environmental problems.

The state has so far only found between $9 billion and $12 billion to support coastal protection and restoration projects, according to the Environmental Defense Fund. To find the rest of the funding needed, the nonprofit is throwing its support behind a relatively new idea: environmental impact bonds.

“The concept of doing the environmental bond, or for that matter, any bonding, is to get capital sooner and do the work sooner,” Cunniff says, “because the more protection you have now, the less vulnerable you are in the future.”

A new report from the Environmental Defense Fund and D.C.-based advisory firm Quantified Ventures, “Financing resilient communities and coastlines: How environmental impact bonds can accelerate wetland restoration in Louisiana and beyond,” describes a strategy for environmental impact bonding, modeled after social impact bonds, in which governments or authorities sell bonds to finance projects up-front, and investors can earn more financial return if certain performance goals are met or exceeded.

To illustrate the idea, the report lays out an example bond transaction. At a simple level, the Coastal Protection and Restoration Authority would issue a bond to investors that would be repayable with settlements from the 2010 Deepwater Horizon spill in the Gulf of Mexico, and use the proceeds to complete wetland restoration work. The transaction would contain certain targets for reducing land loss. If those targets are exceeded — meaning less land is lost than required — then “partner-payors” would pay an additional bonus to investors. The partner-payors would include private asset owners in the area where the work is completed. Those partners would benefit from over-performance by having greater flood protection and less risk to their businesses than they would otherwise. And the whole region would benefit from having a more resilient coastline.

A few years ago, Quantified Ventures helped design the first environmental impact bond in the U.S., issued by the District of Columbia Water and Sewer Authority to fund green infrastructure for stormwater management. In that scenario, if runoff reduction meets certain high targets, DC Water will make additional payments to investors, but if the infrastructure projects underperform in terms of runoff reduction, then investors must make an additional payment to DC Water.

“Resilience is really hard to invest in,” DuPont says. “No one has really entirely cracked this nut, because the benefits you achieve are generally out in the future.”

Environmental impact bonds present an opportunity to raise money for critical projects that benefit communities, investors, and asset owners, she says. The model is starting to spread, as Next City has reported.

For Louisiana, environmental impact bonds would also help keep costs down, Cunniff says. Being able to fund wetland projects now means the authority could avoid inflation costs down the line. And as sea levels rise, the costs will only grow, she says.

Even in the best-case scenario, however, the wetlands will continue to shrink. “Even when we talk about delta restoration, we’re really talking about a smaller delta to be sustainable,” Cunniff says.

Success with the model could help mean a coastline that erodes more slowly, protecting economic and community vitality.

“It’s a new tool,” Cunniff says. “It has promise. We should try it. We should learn from it, and we don’t have time to dither in Louisiana or any of our other coastal communities.”