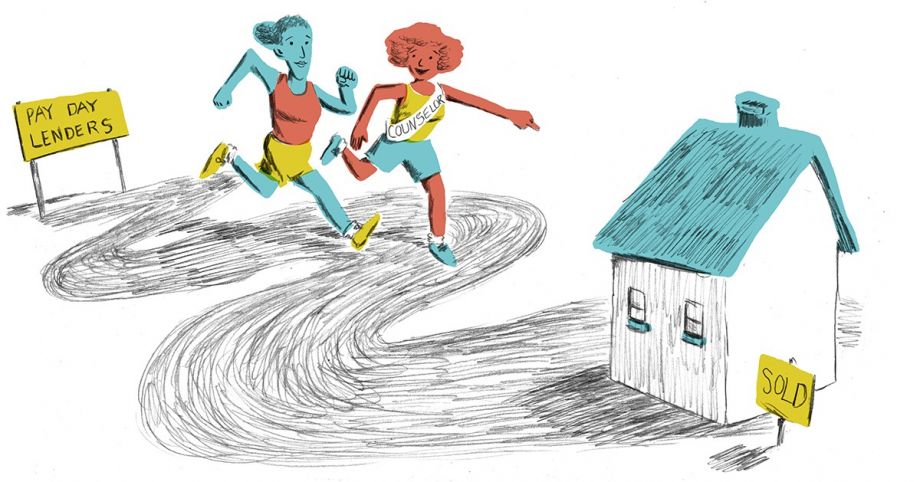 Kim Rogers works at Clarifi, a nonprofit agency whose mission is to help people manage money better so they can get ahead. In one of the workshops they run, called “Show Me the Money,” one of the first questions they ask is, “What do Nicolas Cage, Mike Tyson, MC Hammer, and Toni Braxton have in common?”

The answer? They’ve all made and lost fortunes, or faced bankruptcy at some point.

“It’s not about how much you make, it’s about how you manage what you make,” says Rogers.

Of course, money-management challenges don’t affect everyone to the same degree. Selling off a yacht or a vacation home (or two) to settle bad debts is a far cry from going hungry or getting evicted. At the lower end of the economic ladder, people and families risk more than their homes, or losing hard-earned dollars to usurious interest payments or overdraft fees. The biggest cost of financial trouble for households with limited means may have nothing and everything to do with money — losing the sense that a better future is possible.

Research has shown that poor households typically report higher stress levels than higher-income households and that the kind of stress most associated with being poor also leads to an inability to plan ahead. For example, in Philadelphia, Rogers’ agency, Clarifi, was seeing many public-housing tenants or tenants with Section 8 rental-assistance vouchers miss out on the chance of a lifetime: moving into their own homes for the first time, through the Philadelphia Housing Authority’s Homeownership Program.

With this program, Section 8 families can convert their rental-assistance voucher into a mortgage-assistance voucher that lasts up to 15 years. As another option, they can obtain the equivalent of up to one year’s worth of rental assistance to use to cover down payment and closing costs. And public-housing residents who have been renting one of the housing authority’s scatter-site single-family homes would get the opportunity to purchase the home they’ve been renting. Clarifi partners with the Philadelphia Housing Authority (PHA) to provide homeowner counseling to participants of these programs.

In a typical year, between 40 and 60 families take advantage of the PHA’s homeownership program, according to online records from the U.S. Department of Housing and Urban Development. But that’s a tiny percentage of the PHA’s 13,000 families in public housing and 18,600 families with Section 8 vouchers — not to mention the tens of thousands of people languishing on waiting lists for public housing or Section 8 vouchers.

Rogers believes more families could take advantage of the housing authority’s homeownership program. Why don’t they? Mostly because poor financial health results in too many otherwise eligible families being unwilling or unable to take the leap into owning their own home, or to make other key steps up the economic ladder.

Back in 2013, Clarifi had the opportunity to join a pilot program that established a Philadelphia network of “Financial Empowerment Centers,” which are sites that provide free one-on-one financial counseling. Since then, Clarifi’s Financial Empowerment Centers have worked with nearly 12,000 clients to eliminate $12 million in debt, while also saving nearly $1.3 million, and boosting clients’ credit scores by an average of 43 points. Beyond the numbers, more of those households are now in a position to make the leap into homeownership, or take other steps they hadn’t thought possible before.

“Savings isn’t always about the numbers,” says Rogers. “One client … almost teared up saying [that] thinking about savings and doing this project was giving her permission to think about the future, where in her everyday life, she didn’t feel like she had permission to do so.”

Financial counseling goes beyond mastering financial literacy or increasing financial education. It establishes a trusting, one-on-one relationship with each client that enables the counselor to help clients through tough times and with tough decisions.

“At the end of the day there’s a vast difference between teaching somebody and helping them,” explains Jonathan Mintz, president and CEO of the Cities for Financial Empowerment (CFE) Fund, which advocates for and supports free financial counseling programs as a municipal service in cities across the country. “If somebody’s sick, they need a doctor.”

A related analogy is that of using a personal trainer or a nutritionist. Even trained healthcare professionals don’t unequivocally guarantee to diet and exercise properly. It helps to have not just friends or family in your corner, but a trained professional who can help you set goals, improve your technique or connect you to resources that you’re too busy to track down in your daily life. It’s someone you can trust to give you professional advice on your diet and exercise habits. Financial Empowerment Centers seek to provide that type of professional resource — and not just for those who can afford to pay for it.

“It is now widely accepted and proven in the field, through evaluation, that people with very low incomes will want to engage when offered one-on-one counseling opportunities,” says Mintz. “Not just financial literacy and bromides — real counseling.”

In Philadelphia alone, 8,419 clients came in for financial counseling from 2013-2016, with a median annual income of $19,512. Of those clients, around 67.9 percent were black, 15.5 percent were Latino, 9.5 percent were white, and 71.5 percent were women. Fifty percent were renters, 24.5 percent owned their homes, and the rest lived in various situations from public housing to staying with family or friends to homeless shelters, or preferred not to say. Forty-five percent self-reported working full-time, 11 percent worked part time, 12 percent were unemployed and the rest were self-employed, retired, students, disabled, or stay-at-home parents.

Poet and budding novelist Deborah Turner came into one of Clarifi’s Financial Empowerment Centers a few years ago, pondering a career change. The child of a divorced household who bounced back and forth from one parent to the other, Turner went from living in poverty to earning a comfortable living as an educator. At one point during a financial counseling session, she confided a sensitive family financial issue to her counselor.

“She told me her story and said this happened to me and how did she get through it,” Turner says. “As a woman of color and she being a woman of color … It was really affirming. Those are the stories behind those net-worth stories that don’t get talked about.”

Financial counseling, Turner says, helped her transition out of education into writing full-time. She just turned in a draft of her first novel.

About half of the 8,419 clients who came into Philadelphia’s Financial Empowerment Centers from 2013-2016 never returned for a second session. Some didn’t need it, but some didn’t get the encouragement needed from the first session to convince them it was worth taking the time out of their busy lives to come back. Financial counselors and program administrators are still learning what it takes to incorporate some of the latest research on household financial management.

From May to December 2017, financial counselors in Nashville and Philadelphia tested some adjustments to their programs, based on that latest research. They acknowledged the value of short- and intermediate-term goals, such as paying off one debt at a time or saving for a car, along the way to long-term goals such as owning a home. They asked clients about their use of informal savings mechanisms such as tandas, sou-sous or birthday clubs — also known as lending circles.

There’s also what Rogers calls “lending to save,” or simply giving a trusted relative or friend a small bit of money to “hold onto,” knowing if they need that small amount later, they can trust it won’t be too hard to get back. During the six-month experiment, Philadelphia clients who let trusted family or friends hold onto money for them had “saved” an average of $715 dollars via the practice.

“In the original Financial Empowerment Centers work we were doing, it didn’t tell the full story,” Rogers says of the six-month experiment. “We were able to capture places where people were really saving.”

Still, it’s been disheartening for Rogers, Mintz and others to watch the Consumer Financial Protection Bureau’s powers curtailed under the Trump administration. With every proposed rules change to reduce or limit the bureau’s powers, CFE Fund has submitted letters to the bureau, offering to share perspective from mayors across the country on how important it is to cities that strong consumer financial protection exists at the federal level. They haven’t heard back.

This article is part of the High Cost of Being Broke series, produced by Broke in Philly, a collaborative reporting project on economic justice. To see all the #HighCost stories, please visit: brokeinphilly.org

EDITOR’S NOTE: This article has been modified to reflect there are three Financial Empowerment Centers sites in Philadelphia, and to clarify the financial situations of the celebrities mentioned in Clarifi’s financial workshop.