Filing for Chapter 9: When Bankruptcy Is the Only Option Left for Cities – Next City

Filing for Chapter 9: When Bankruptcy Is the Only Option Left for Cities 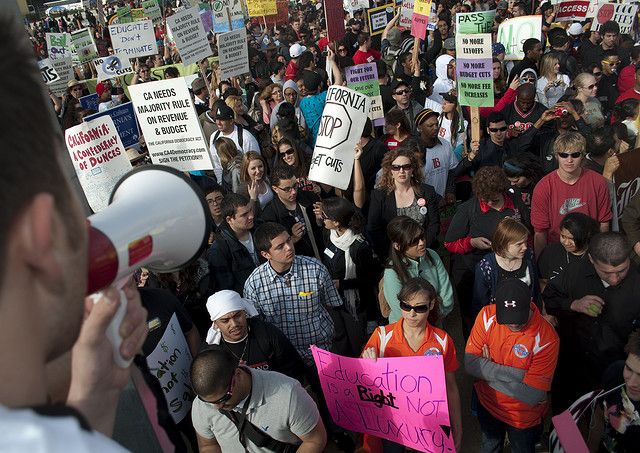 San Bernardino is third in a list of California cities that have filed for Chapter 9 bankruptcy protection — essentially, Chapter 11 for municipalities — in the past month. Compton, just south of Los Angeles, may join the list soon as officials have reported that the city is likely run out of money by the end of the summer. In late June, Stockton, a city of 292,000, became the largest-ever U.S. municipality to file for bankruptcy after three months of mediation with creditors failed to produce a deal to restructure more than $700 million of debt.

The resort town of Mammoth Lakes sought protection on July 2 after a property developer won a $43 million court judgment against the city, a ruling that left the small town swooning.

From 1980 to the first quarter of this year, there have been only 254 Chapter 9 filings, the bulk of which were filed by school districts, hospital districts and other similar organizations. Last year, four municipalities applied for Chapter 9 protection, including Jefferson County, Ala., while Vallejo, Calif. emerged — three years after filing for bankruptcy — from its own reorganization.

Though still relatively rare, is there a wave of Chapter 9 filings coming for cities nationwide?

According to the experts, the answer is no. Filing for Chapter 9 is by no means the flawless solution to a city’s fiscal woes. It does not eliminate a city’s pensions and bond debt, and leaves its reputation tarnished and its credit rating downgraded. Around half of states make it nearly impossible for municipalities to file, anyway — a fact that has caused officials in Harrisburg, Penn. to seek alternatives as the court rejected their petition for bankruptcy.

Though the growing “trendiness” of Chapter 9 could be debated, few would argue that the recent uptick in municipal bankruptcies emphasizes the mounting financial pressures that are facing local governments. Cities across the nation are hurting: Property tax revenues have plummeted while pension costs and unemployment rates continue to escalate.

California’s budget has become increasingly dependent on borrowed money from localities to help the state stay afloat. Hit hard by the foreclosure crisis, California municipalities were put under further strain last year when they lost $5 billion in funding due to the abolishment of redevelopment agencies by the state legislature.

Three years after filing for Chapter 9, Vallejo still bears the scars of bankruptcy. Though Vallejo was able to escape at least $32 million in debt, the restructuring cost the city $13 million in legal fees and has lead to severe budget cuts to the police and fire departments and to benefits for retirees. The city also has yet to rework its pension plan.

Though Vallejo’s reorganization has been neither smooth nor easy, many argue that the bankruptcy was a vital wake-up call to the city about the sacrifices that needed to be made — a
conversation that is being echoed nationwide as cities grapple with the current financial reality.

“Bankruptcy brings a brutal recognition of the new normal,” Vallejo Councilmember Stephanie Gomes told the Associated Press. “It’s Darwinism. The cities that are going to stay solvent are the ones that can evolve.”