Fighting Floodwater to Grow a Garden — and a Healthy New Orleans 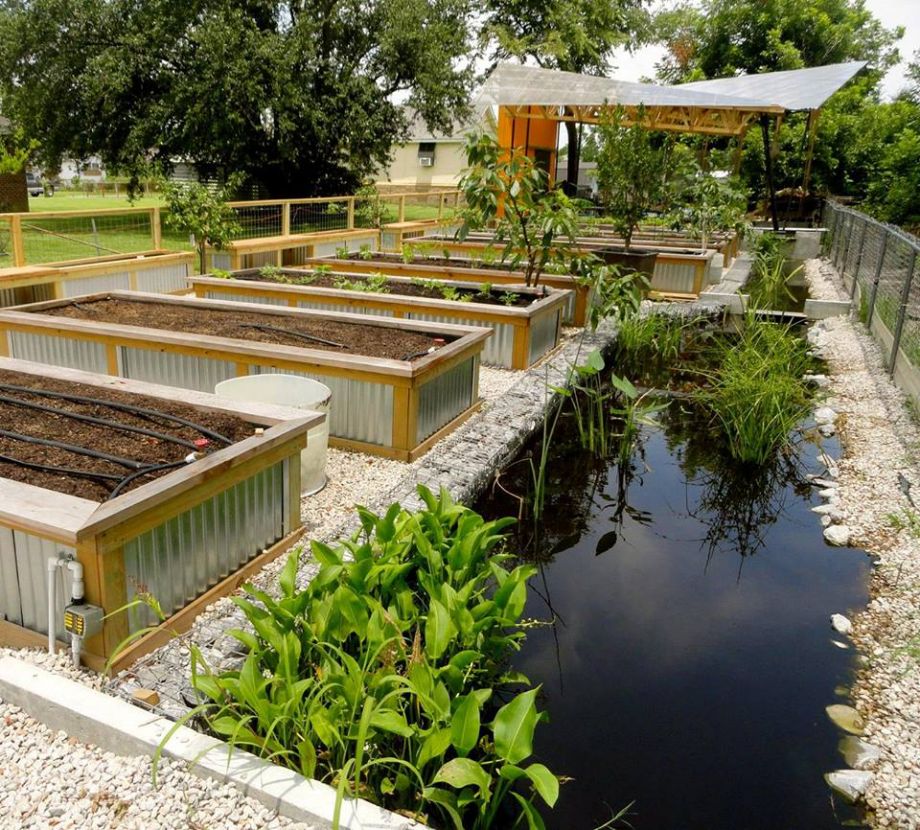 The Magellan Street Garden, in the Algiers section of New Orleans, was trying to grow. But this plot of community land, tended by a retired electrician and veteran named Tony Lee, had a problem all too common in this water-drenched city. “I knew I needed some help,” Lee said. “Every time it rained, it flooded.”

Lee and his helpers, working within the framework of the Parkway Partners community garden group, had done what they could with the site, making raised beds with cinderblocks and planting carefully tended rows of okra, melons and arugula. They dug a trench 150 feet long, six feet wide and between one and two feet deep to try to channel the flooding. But the swampy ground running along one edge of the space remained unusable. “The rain would fill that up in no time,” Lee said.

Lee started the garden around the corner from his house because he has seen the power of community gardens to contribute to the health and well-being of people of all ages. He and his late wife, Lanette Williams Lee, had been active in Algiers for years. After Katrina struck in 2006 and the city lost all of its major supermarkets, they began educating themselves about the importance of access to healthy food. “The more I learned about our food system here in America,” Lee said, “the more I wanted to get involved.”

After his wife passed away in 2009, Lee threw himself into community work and started developing the Magellan Street plot. It became a place where youth groups would come to learn about eating better and how the loss of small farms threatens food security. Lee has had some success selling microgreens and other produce to local restaurateurs, and wanted to expand his efforts. But the flooding remained an issue.

Then the folks from the Tulane City Center, a project of the Tulane School of Architecture, got involved. Working closely with Lee and other community members, a group of TCC students and faculty put together a plan for the garden that turned its abundance of water into an asset rather than a liability.

Over a 14-week period this spring, a 12-student team from TCC, led by faculty members Doug Harmon and Sam Richards, worked with volunteers to completely reinvent the site. After assessing the garden and the needs of those who use it, they designed a system of raised beds made with easily replicable materials, which could be tended by people sitting down. Lee hopes to bring veterans, some of whom find standing for long periods uncomfortable or impossible, to work here.

But the real star of Magellan is a shade structure that channels runoff into irrigation systems and a series of pools. The uppermost pool, near the comfortable shaded seating area, contains fish; the next is home to native water plants; and the lowest section is a small, manufactured wetland planted with native grasses and other water-loving vegetation. Underneath it all is a deep layer of rocks that allows the water to percolate slowly through without flooding.

When it rains, water spills off the roof into the first pool and then down into the others. “It’s so beautiful to watch,” Lee said. Ultimately, he would like to start an aquaponics program in the pools. But in the two months since volunteers completed work on the project, the water features have already provided a very real benefit: Turtles and frogs have moved in, hungry for mosquito larvae.

“I used to have to spray people down before they came into the garden,” Lee said. “I lit candles and torches.” Not anymore. The new residents have done away with the mosquito problem in an ecologically friendly way.

Lee said that all this gets incorporated into the message he gives the young people he brings through the garden: The vanishing wetlands of Louisiana are marvelous natural habitats that can provide benefits for the city of New Orleans, such as protection from storm surges. “I tell the youth,” he said. “It’s part of the lesson.”

Already, Magellan is a magnet for people from around the city and beyond. “I get a lot of community involvement in that site because it’s a beautiful site,” Lee said. The garden serves as a model for an idea being explored by Tulane City Center and others who care about water management in New Orleans: If enough rain gardens and other features are constructed in community plots and on private property around the city, the overall impact on runoff and flooding could really start to add up.

For Lee, the garden is a place to explore the “million ideas” he has about the environment, food security, health and economic development in his community. “I use my little garden as a platform to speak out,” he said. “My goal is not just to grow food, but to grow people.”