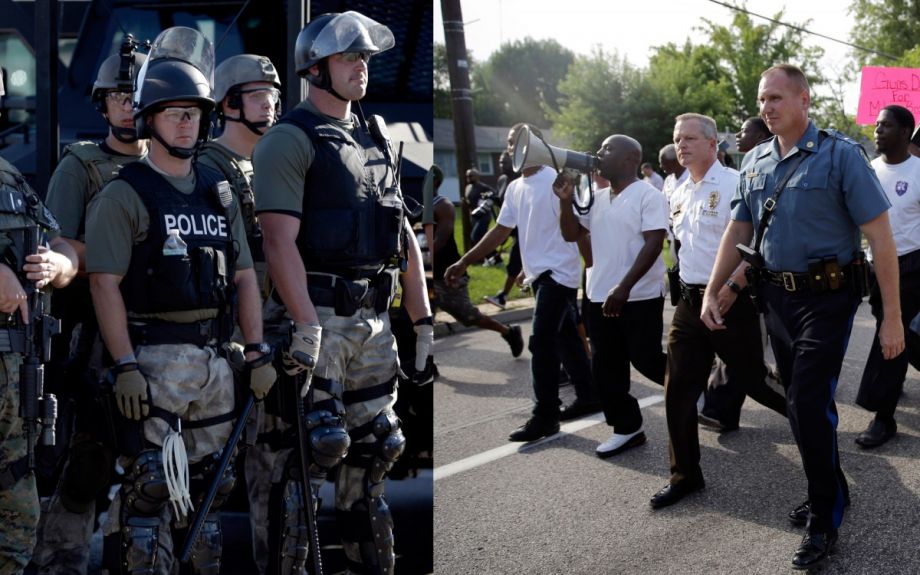 Missouri did the right thing when it changed tactics in Ferguson, replacing SWAT teams with state officers who took a community policing approach. (AP Photo/Jeff Roberson)

Finally, a bright moment for urban policing in Ferguson.

The state of Missouri made a wise decision on Thursday when it replaced the incorrigible St. Louis county police with state officers, clearing the city of “heavy riot armor, the SWAT trucks with sniper posts, the hostile glares,” reported the Washington Post’s Wesley Lowery.

Instead of military-style occupation, officers are mixing with demonstrators in the streets, listening to stories of police intimidation and fear, sharing grief over the senseless death of 18-year-old Michael Brown. Lowery, who experienced the intimidating tactics of St. Louis county police firsthand when he was forcefully detained by officers on Wednesday, described the stark difference in approach as a “stunning change in tone,” hugs replacing tear gas. As gas masks and body armor disappeared from sight so did aggression.

“This is what our community was like before a child was killed in our streets,” Jerroll Sanders, one of the protest organizers told Lowery. “But what we’ve seen is a change in the policing approach. The aggression was never brought on by us.”

In an op-ed published today, St. Louis area blogger Nicole Hudson wrote that the police shooting that took Michael Brown’s life created an opening for change in St. Louis, a city with a long history of racial strife and disparity. “I’ve seen an increase in active and intentional searching for real outcomes and real conversation over the past week,” she wrote.

The tactical shift of law enforcement in Ferguson indicates that Hudson has reason for optimism. What happened in Ferguson between Monday and Wednesday had nothing to do with public safety. It was a show of the worst tendencies of urban police work, the tendencies towards violence and suppression. As many observed, the streets of Ferguson looked more like occupied Gaza than a suburban precinct of a democratic country.

As Emma Roller over at the National Journal pointed out on Thursday, the militarized response to civilians demonstrating against the police shooting of an unarmed recent high school graduate shouldn’t come as a surprise to us. It is the direct result of a 1990 defense bill that gave the green light to the Department of Defense to pass off unused military equipment to local law enforcement followed by a post 9/11 spike in domestic defense spending. It is the indirect result of two decades of decision-making in Washington prioritizing military spending and aggression over other public needs. If a fraction of the $449,309,003.71 went towards militarizing law enforcement agencies in 2013 went to the Department of Education or the Department of Transportation, Ferguson would likely be a safer place with more opportunities for young men like Michael Brown.

But let’s not pretend this is some quirk of post-9/11 America. There is a generations-old relationship between war technologies and urban space, particularly urban space occupied by brown and black bodies. The first time a fire bomb was used on American soil was to quell a riot in a black neighborhood in Tulsa in 1921, says University of Pennsylvania researcher Jessica Hurley. The next time was in 1985, when the city of Philadelphia bombed the headquarters of the black liberation group, MOVE. NASA helped found Temple University’s Department of Urban Planning in hopes of finding a new use for the theories and technology the agency had developed to fight the Cold War. “There is a long history here,” said Hurley.

It’s a history ripe for interruption and if there is one thing that we’ve learned in Ferguson this week it is that one decision can inspire many others, for good and for bad. Missouri made the right decision Thursday. Other cities and other police forces should take note.