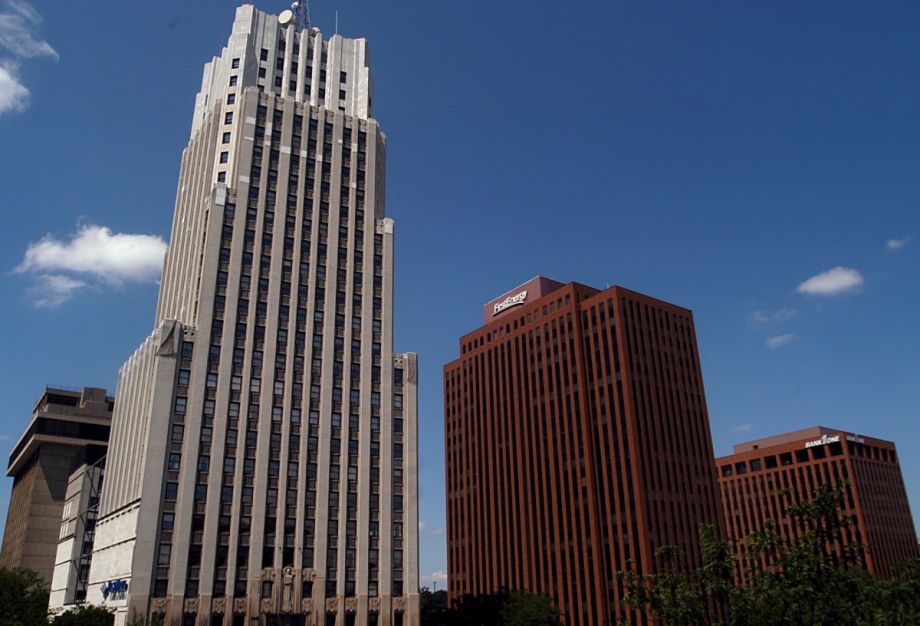 On Main Street in downtown Akron, the former ExxonMobil Advanced Elastomer Systems building still occupies a key position in the psychology of the former industrial powerhouse city. The building was originally part of the B. F. Goodrich tire manufacturing plant that once employed 15,000 people.

“It was Goodrich. It ran 24 hours a day, and that still resonates,” says Chris Burnham, who runs the Development Fund of the Western Reserve. As an Akron native, Burnham recalls the heyday of Rubber City’s manufacturing past. “Goodrich, Goodyear, General Tire, Firestone — whole families worked at those places,” he adds. “That’s how you grew up.”

The six-story, 452,000-square-foot building sat idle for a decade before being redeveloped with an entirely new interior in the 1990s, when ExxonMobil arrived and leased two entire floors for nearly 20 years. The exit in 2015 of ExxonMobil and its 200 employees was a blow to the building and the downtown area.

But over the past two years, new commercial tenants have brought more than 500 employees into the building, according to David Schipper, president and CEO of Schipper Group, which owns the building. Two new businesses, a health service company and an engineering and architectural firm, will soon fill another 17,000 square feet and bring about 70 more jobs to the downtown location.

A below-market rate $580,000 loan from the Development Fund of the Western Reserve is helping to cover the costs of renovating the space for the building’s two new commercial tenants. The loan was important, Schipper says, because it allowed his firm to pay for the renovations without having to dip into its reserve funds. Having refinanced the building about a year ago, he says, a healthy reserve fund is crucial for remaining ready to land larger tenants and do any necessary buildout. He hopes to have a thousand workers in the building by the end of 2018.

The below-market rate loan is part of the Akron Community Revitalization Fund, a revolving loan program that aims to spur private sector investment in economically depressed areas of Akron. The Development Fund of the Western Reserve administers the program, with an initial $6.75 million in capital coming from a mix of loan and grant funding spurred by a federal New Markets Tax Credit allocation.

The New Markets Tax Credit program was established in 2000 to provide an incentive for private sector investment in businesses and development projects located in distressed census tracts. The Akron Community Revitalization Fund is targeting loans of $500,000 to $2 million to areas with high poverty or unemployment rates.

Akron, once the site of half the world’s rubber tire production, has ambitious plans for building itself back up after suffering a long decline in jobs and population in the decades since the city’s slate of major tire companies ceased manufacturing operations there in the 1970s and 80s.

Several of the Akron Community Revitalization Fund’s initial loans are for projects in old industrial buildings that have been or are now being adapted for new uses. One of the larger loans so far, for $1.28 million, will aid the development of a 71-room jazz-themed hotel in the historic United Building, constructed in the 1920s for United Cigar Stores.

The new Northside Marketplace, developed by Testa Companies, provides scores of local entrepreneurs brick-and-mortar space along with business coaching and mentoring. Vendors include food, coffee and local craft beer establishments, clothing and art businesses, and even a bicycle shop. A below-market rate $650,000 loan from the Akron Community Revitalization Fund is helping to expedite the marketplace’s second phase of construction, which will include a year-round farmers market and retail pop-up and event space.

Testa Companies President and CEO Joel Testa says that his firm developed Northside Marketplace with its own capital, and the low-cost loan allowed them to free the money back up for other investments. “Akron is at a unique time where the demand is quickly increasing for housing and businesses in the downtown area, yet there is still a large [gap] between the cost of developing spaces for them and what the marketable rates are,” he says via email. “Low-cost financing is a crucial part of filling that gap.”

Burnham says assembling the Akron Community Revitalization Fund was no small task. It started when his organization dedicated a $6.75 million New Markets Tax Credit allocation to the fund in 2015. But because of the way the federal program works, $6.75 million in tax credits provides only about $2.3 million in actual cash equity, so in order to fully capitalize and launch the fund, the Development Fund of the Western reserve had to gather another $4.45 million to fill the gap.

Over a two-year period, Burnham says, his group received more than $2 million in philanthropic grants from the Akron community through 30 different grant-making entities. “That was a lot of work,” Burnham says, but it still brought them only halfway. Next, they sought assistance from the Chamber of Commerce, which lent $1.5 million at a favorable rate. A conventional loan from PNC bank closed the remaining gap.

By pooling all the above, the Development Fund of the Western Reserve can offer revitalization loans at a below-market 2.5 percent interest rate. New Markets Tax Credit program rules also mean that for the first seven years of each loan, payments are interest-only — another attractive element for borrowers. Also as part of the New Markets Tax Credit process, Burnham’s organization is required to keep close track of community impact metrics such as the number of jobs created and the number of jobs filled by residents of low-income communities.

Finally, as the loans are slowly repaid, the fund will be replenished.

“What we’re excited about — the whole logic behind going through all this pain — is everybody will be repaid, and we’ll have generated some interest income, and the $2.3 million [of tax credit-fueled equity] and the grant money stays in the fund forever,” Burnham says. “So we’ll have a loan fund to serve Akron in the long run.”