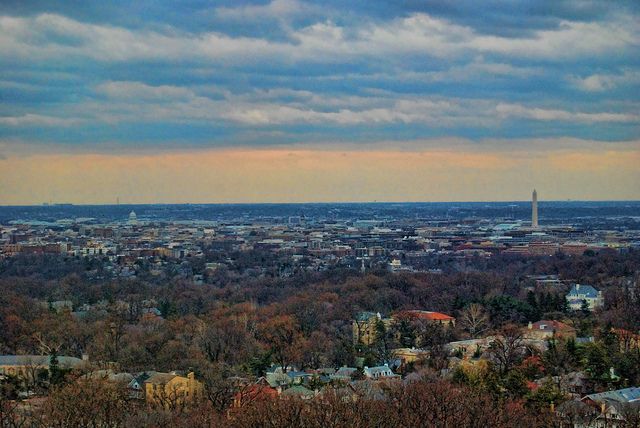 A view of Washington, D.C., from the National Cathedral. Credit: Nicholas Schooley on Flickr

Rep. Darrell Issa, the California Republican who heads the House committee that oversees the District of Columbia, asked the National Capital Planning Commission and the office of D.C. Mayor Vincent Gray last October to jointly “examine the extent to which the Height of Buildings Act of 1910 continues to serve federal and local interests, and how changes to the law could affect the future of the city.”

To the surprise of some observers, the NCPC actually issued a draft set of recommendations on Thursday. The gist of its findings? That as far as it’s concerned, the city is at its ideal height.

Rare among U.S. cities, D.C. caps how high its buildings can go. Those limits are the result of a complicated history whose highlights include Revolutionary-era worries about fire safety, a particularly hulking Dupont Circle apartment building, and a modern emphasis on building cities in such a way to highlight their civic assets, of which D.C. has very, very many.

Since Issa has drawn renewed attention to the Height Act and complementary local height restrictions, urban planners and architects have been entertaining ideas of how D.C. might otherwise handle height. During a March forum at the National Archives Building, presenters described London’s clustering of tall buildings and Hamburg’s “spiky” skyline.

But though it saw “several potential opportunities for strategic change,” the NCPC has taken a much narrower approach, more or less advocating for one technical tweak and calling for further study.

Under the Height Act, penthouses are largely prevented from housing people, instead ending up as places for storing mechanical equipment. The NCPC concluded on so-called mechanical penthouses that “permitting a broader range of active uses in most parts of the city — if properly implemented and with certain restrictions — does not appear to affect federal interests in most instances.” That change might increase the population of D.C., but it wouldn’t make the city any taller.

Beyond that, the NCPC is unwilling to venture. “There may be some opportunities for strategic change in the areas outside of the L’Enfant City and beyond the edge of the topographic bowl” — the low-lying area where much of official D.C. exists — “where there is less concentration of federal interests.” But the commission says that the District would have to provide more “specific direction” in order for its federal protectors to understand whether those changes make sense.

Slate’s Matt Yglesias, who has pursued the D.C. building height issue as a micro-beat, argues that federal planners are failing to appreciate that “federal interests” are served by having a denser Washington:

Expensive DC real estate is also an indirect cost to the federal government in other ways. High housing costs lower the real wages of federal employees. Change that and you could either recruit equal-quality people with less money, or higher-quality people with the same money. High office rental prices raise the cost structure for federal contractors, and since government contractors largely compete with other local firms for the same contracts those costs get passed on to the agencies. Last the high price of hotel rooms in the national capital region both raises agencies cost of doing business (when people come here to stay) and also degrades the value of the taxpayer-financed tourist amenities in the city.

Perhaps, but it’s worth emphasizing that the NCPC is less concerned with the federal government as a functioning institution than as an idea. D.C. is meant to be sweeping, iconic, majestic — the very embodiment of democracy in marble and avenues, the city as “the permanent seat of the government of the United States.”

The NCPC was created back in 1924, but the acronym then stood for National Capital Park Commission. That “Park” gives a sense of its goal: Implementing Pierre L’Enfant’s plan for the District of Columbia and its successor, the McMillan Plan. Home rule in 1973 gave city planning responsibilities to the District, but left federal planning responsibilities with the NCPC.

So federal planners have said their piece. The subtext to all this is that the city — as in the municipal government of the District of Columbia — now has to say on its own where it stands on the Height Act. An official from the Office of Planning told Washington City Paper that “internal consultations” stymied city efforts to issue recommendations jointly with NCPC. Whether the city actually does want to open the door to aggressive redevelopment of non-federal Washington has been an ongoing question.

Now, it will be expected to make its preference clear on a separate piece of paper, unbounded by the “federal interests” that would have perhaps usefully constrained the city had it issued its recommendations jointly with the NCPC.

The NCPC’s Height Act recommendations will go through a public comment period before they’re formally issued in early November.