4 Reasons Federal Money Is Bad for U.S. Transportation – Next City 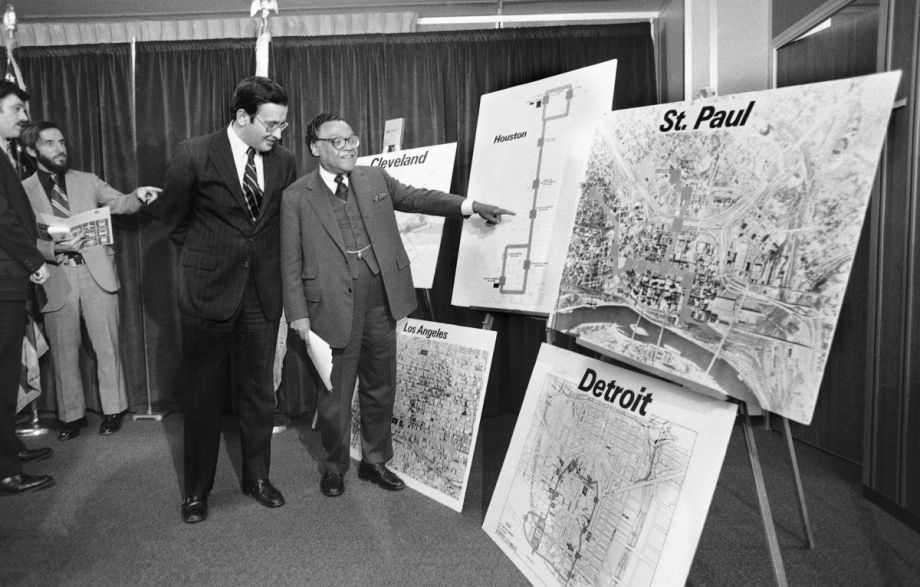 The Congressional battle over shoring up the Highway Trust Fund has been painted as one between those willing to pay for transportation infrastructure and those willing to let it crumble. But really, the debate is over which level of government should control policy. Democrats would like to refurbish the fund, since it would keep road and transit construction largely under federal oversight. Some Republicans would like to extinguish it, so that localities could pay for, and thus dictate, their own policies. The Republican argument is partly inspired by the fact that federal bureaucracy adds expense to transportation projects. But mainly, it is inspired by the idea that distant governments aren’t as good as local ones at deciding which projects are best.

This latter point, while seemingly reasonable, has gone untested because of the way that the U.S. funds transportation. Currently, 27 percent of funding comes from the HTF, another 38 percent comes from state governments, and even much of the 35 percent in local revenue is used by regional authorities. This has produced a top-down approach to transportation, as distant bureaucracies fund large projects that are often out of step with local needs.

Perhaps no greater example exists than in Detroit, which has used state and federal funds to build various foolish projects, from the universally panned “People Mover,” to an overly fashionable downtown transit center. Recently, the city has applied a similar funding formula for two upcoming ill-fated projects, the I-75 and I-94 expansions, which have been criticized, appropriately, as concessions to suburban interests. Meanwhile, they will harm the pedestrian accessibility and urban fabric of several city neighborhoods, including the newly blossoming Midtown.

Light Rail From Dallas to Cleveland

Another common outside misallocation has been for the light rail systems in many U.S. cities. While these are entirely appropriate in dense ones, they amount to white elephants in the spread-out ones. It is astounding, for example, that the nation’s longest light rail system is found not in New York City or Chicago, but Dallas, a sprawling city that may never achieve a critical mass of riders. Yet Dallas Area Rapid Transit boasts this thanks largely to $70 million in annual federal subsidies. Unsurprisingly, given the regional layout, DART’s ridership has fallen well under initial projections, and used revenue that could have gone toward buses, which are cheaper and better at serving remote, low-income areas. It is worth noting that since 1992, when the system went under construction, per capita transit ridership has actually fallen citywide.

But this hasn’t prevented systems from also being built in similarly sprawling cities like Phoenix, and declining, hollowed-out ones like Cleveland. The federal government’s willingness to fund them has all the makings of a poorly-executed top-down plan; it’s as if officials think that just because a transit blueprint works in a few places, it should be imitated everywhere, despite geographic and cultural differences.

Large roadways can also be an inefficient use of federal funds, especially when built in low-intensity areas, with the entire state of Alaska serving as a case study. Since 1956, when the federal gas tax was introduced, Alaska has received a 3.7 return ratio for every dollar it pays into the HTF — by far the highest of any state. Much of the expense is due to the fact that Alaska’s terrain is difficult, and its population sparse enough that local funding remains unreliable. A 2012 report by Taxpayers for Common Sense determined that of the eight worst proposed U.S. transportation projects, three are in Alaska. This includes the infamous “Bridge to Nowhere,” along with two roads that would connect the cities of Juneau and Anchorage, respectively, with remote territories. None would likely be considered if not for the state’s built-in reliance on federal money.

A Bypass in Charlottesville

Many of the nation’s most inefficient transportation projects were funded either partially, or altogether, by outside money, usually from the federal government. But the misguided one that resonates closest personally has long been proposed by Virginia’s state government for my hometown of Charlottesville. For decades, officials have advocated for a 6.2-mile Western Bypass that would connect Charlottesville’s northern suburbs with UVA, by diverting from U.S. Route 29, our main north-south corridor.

The state has argued that the bypass would speed up truckers who get stuck in Charlottesville traffic when transporting freight to southwest Virginia. So in 2011, VDOT allocated $197 million for the $244 million project, and put a representative on our regional MPO, who became the deciding vote of approval.

But this didn’t faze locals, whose opposition stemmed from several valid points. Many claimed that an alternative plan to upgrade U.S. 29 would move traffic just as effectively at less cost. Some residents didn’t like that it would tear up countryside. Others thought that the proposed bypass was wasteful and poorly located, and were reaffirmed when it made the same notorious Taxpayers for Common Sense list. After all, growth had spread in numerous directions since the initial proposal, meaning that money would benefit more people by going toward various smaller projects region-wide.

Fortunately, it appears that this bottom-up approach may happen. Following approval, further local discontent caused VDOT to terminate the project, and the leftover money is now being considered for alternative uses. But this still means that much money and time went into planning a project that never happened, and the bottom-up approach is still unusual for U.S. transportation policy. Generally, outside money goes toward large-scale and, as noted above, sometimes unnecessary projects. Localities can either accept this money, despite the imperfections, or reject it and get nothing.

A better alternative would be if transportation money were structured more for local autonomy. This could be done by distributing state and federal money through a block grant system — or by simply allowing localities to keep more of it beforehand. This would not automatically rid America of every transportation boondoggle, but it would probably make them less frequent. Because if anyone understands an area’s transportation needs, it will be those living closest by. It’s only natural, then, that they would be central in deciding how money is spent.