Federal Flip-Flop on Flippers in Cleveland – Next City

Federal Flip-Flop on Flippers in Cleveland 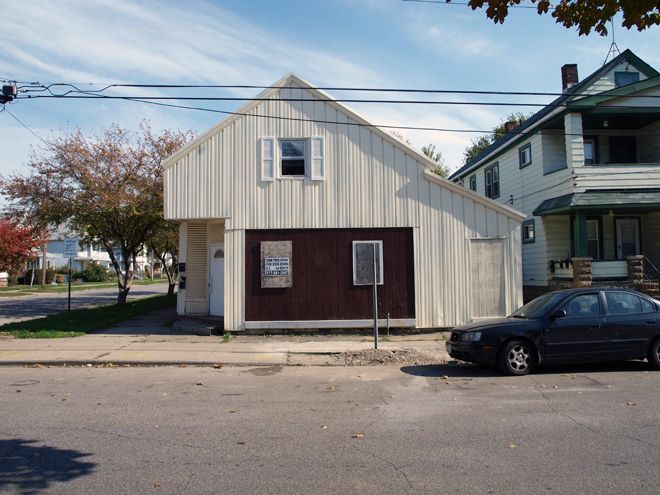 Own this home for $500 down! Clark Mizono

When we speak of federal urban policy our conversation is typically limited to the actions and policies of the legislative and executive branches of our government. It’s rare that we mention the judiciary — I have once this year — but that does not mean the judiciary branch isn’t quite important when it comes to urban policy issues. Think, for instance, of the argument put forth in Freakonomics, that Roe v. Wade is the sole reason for the massive drop in urban crime that happened in the first half of the 1990s — essentially, there were less unwanted children. It certainly wasn’t an intended consequence of the decision, but it led to safer streets nationwide, and took New York from the days of New Jack City to Sex and the City, for better or worse, in about a decade.

The judicial branch also makes actual urban policy decisions, too. Take, for instance, the case of the Village of Euclid v. Ambler Realty Co. The case, argued in 1926, essentially established the constitutionality of modern zoning ordinances. Euclid, a suburb of Cleveland, established zoning laws to regulate land use, and avoid becoming as heavily industrial as nearby Cleveland. They were sued by Ambler Realty, who owned 68 acres of land, and claimed the zoning laws had greatly devalued their property. Euclid lost the case, initially. Eventually, the Supreme Court overturned the ruling, and in doing so, established precedent for localities using their police powers to create and enforce zoning laws.

Nowadays in Cleveland, it’s not easy to imagine anyone wanting to turn down a potential employer, industrial or not. And a new court case in Ohio, borne out of its economic woes, has echoes of Euclid v. Ambler, but with more modern problems, specifically a gargantuan financial services industry that a more conservative judiciary seems all too eager to please, instead of the places they serve. The details and outcome of the case are as complicated as the mess they came out of, and it seems that the end result of the ruling might be a partial stripping of Cleveland’s police powers.

Back in 2008, a non-profit called CHRP — the Cleveland Housing Renewal Project (pronounced “chirp”) — filed two simultaneous lawsuits against lenders Wells Fargo and Deutsche Bank, under Ohio Revised Code 3767.41, which allows private citizens, municipalities and non-profits to file civil suits — instead of criminal suits — against owners of properties deemed to be public nuisances. CHRP filed suit against Wells Fargo for 11 of their abandoned and foreclosed homes in Cleveland, and sued Deutsche Bank for 26 of theirs, claiming all were public nuisances.

For CHRP, they were a nuisance, but this takes a little explaining.

CHRP, in a certain sense, doesn’t really exist, Frank Ford, Senior VP of Research and Development at Neighborhood Progress, Inc, explained to me in his office a few Fridays ago. CHRP is a non-profit subsidiary of LAND LLC, the Land Assembly for Neighborhood Development, which is a for-profit subsidiary of Neighborhood Progress (NPI), itself a 501©(3), which offers funding and technical support to neighborhood development corporations all across the city of Cleveland. LAND is an LLC that NPI uses to acquire — you guessed it! — land and properties for their affordable housing development projects, or just to tear down nuisance properties. LAND was initially going to be plaintiff in the lawsuit, but could not because, due to the peculiarities of Ohio Revised Code 3767.41, for-profits are not allowed to file this type of suit. CHRP exists more or less only for the lawsuits — it has no budget or full-time employees — but it is essentially a proxy for Neighborhood Progress, who operate for the public good.

Frank Ford told me that he and others at NPI started to notice something was amiss in the middle of the last decade. The production pipeline for new and rehabbed housing units entering the market in the city was about 700 per year, Frank told me. That includes NPI, other CDCs, the city, and small developers. What Frank started to notice in the early aughts is that foreclosures in the city were rapidly increasing. He was drawing pictures and writing down figures for me on his whiteboard, and to demonstrate the problem, he drew a city block with one black dot, representing a rehabbed home that NPI has helped put back on the market. Then he took out the red marker, and surrounded the black dot with red dots — fresh vacants. Their rehabbed housing was entering a market where 8,000 homes were being foreclosed on every year, and if only one quarter of those go vacant, the whole citywide production pipeline is one third of the new stock of vacant homes.

This doesn’t really work for NPI, and it doesn’t work for Cleveland.

So, CHRP filed suit, not for their own gain, but to do some experimental litigious activism — could they create a tool to help cities like Cleveland fight back against this bank-caused blight? They filed suit under the public nuisance statute, but they went one step further in their complaint: they argued that the large lending houses’ business practice was itself a public nuisance. To keep this brief, foreclosures take a long time, and banks are loath to repair a house they have collected as collateral, even if it is out of code, falling in on itself, boarded up, whatever. So, during the foreclosure proceedings, banks willingly hold onto out-of-code buildings, and once they actually own the property, they tend to sell them off in bulk — at steep discount, at times 1/10th the appraised value — to home flippers with ironically- or despicably-named LLCs like Go Invest Wisely, A Lotta Fannie, and Frank Ford’s personal favorite: Junk House Riches.

These house flippers don’t much care to keep their houses up to code, either. They buy in bulk, and make their profits on the margins. What they didn’t know is that it wouldn’t be so easy to flip homes in such a weak market — it’s hard to know when you’re a day-trader who has decided to diversify his holdings, working from your laptop in another state or even another country — so the houses just sit there, deteriorating in the weather, vandalized by neighborhood kids, passively lowering property values and neighborhood quality of life in the process.

So, CHRP’s simultaneous lawsuits sought to put an injunction on the banks to hold them financially accountable for the rehab or — more likely — demolition of their out of code properties, but also to put a stop to the business practice of selling to flippers, and willingly keeping properties out of code. As Kermit Lind, a clinical professor of law at Cleveland State University and principal in the case, puts it in an upcoming article, “The plaintiff asked only that the defendant comply with the law.” It would seem that this is not a tall order. That assumption would turn out to be incorrect.

The two complaints, after being introduced to Cleveland’s Municipal Housing Court — headed up by Judge Raymond Pianka, such a formidable foe to flippers and code violators that Frank told me that home flippers have a word for getting an injunction in Cleveland: getting “Piankaed” — were both sent to federal court, due to the request by both banks’ lawyers. Both cases went to different federal judges, and both were remanded back to municipal court by both judges, but in different ways.

The Wells Fargo case was remanded back to municipal housing court by federal district court Judge Ann Aldrich, who argued that Wells Fargo failed to show adequate cause for having their case remanded to federal court. Her decision was unappealable, so Wells Fargo went back to Ray Pianka’s court, and got Piankaed. Wells was forced to demolish the 11 homes at their own expense, and they were served an injunction on the business practice of keeping buildings out of code. Wells, of course, has appealed this to state court, where a technicality based on CHRP’s argument for not having standing in federal court might be used against them in state court. But for now, CHRP has created a useful tool for municipalities in Ohio to use when they want to sue for code compliance against entities that hold properties in high volume, and have no incentive to keep them in good shape, instead of suing property-by-property.

The Deutsche Bank case had a worse fate, owing to a different federal district judge’s decision. Judge James Gwinn also remanded the case back to municipal housing court, but his decision was made on different grounds than Judge Aldrich’s, which left open the possibility of appeal. So Deutsche appealed, and got their case moved to the 6th Circuit U.S. Court of Appeals.

What is strange about this, Kermit pointed out, is that we are talking about Ohio state statute here. And more specifically, about laws that regulate how Clevland uses its land, and how it can protect its citizens from harmful uses. Kermit puts it this way: “The land and the people are not portable…they aren’t part of this stream of global commerce.” So why shouldn’t Cleveland be able to use its own civic apparatus to handle cases of this sort?

He raised a clever rhetorical question, too: can a homeowner in Cleveland, who is being sued for having broken front steps, move his case to federal court? Obviously not. So what has been set up here, Kermit pointed out, are two completely different applications of the same laws, and two different court systems: one for corporations, and one for ordinary citizens. This is painfully ironic when you consider the recent Supreme Court ruling in Citizens United v. Federal Election Commission, where it was decided that corporations have first amendment rights, and that speech and money are more or less the same thing. Corporations are gaining more rights as citizens when it benefits them, and they are being protected from being treated as ordinary citizens when it benefits them. It’s win-win if you’re a multinational these days.

This decision in the Deutsche case is a sort of reversal of Euclid v. Ambler — not a direct overturning, but they’re related, it seems. In the future, municipalities might find themselves unable to enforce their own statutes in their own courts against large corporations, simply because these corporations are so large, and because our federal judiciary seems increasingly willing to rule on their behalf.

This story isn’t over, as Kermit and Co. still have a case to argue in federal court, and he has a good feeling about it. It’s the fact that he’s in federal court in the first place that’s troubling, and more troubling still that our federal courts are governing bodies that seem less interested in the welfare of people and places as they do the welfare of corporations. The courts, in essence, are protecting financial institutions from having to face the realities of what the foreclosure crisis is doing to cities like Cleveland. There’s no justice there.