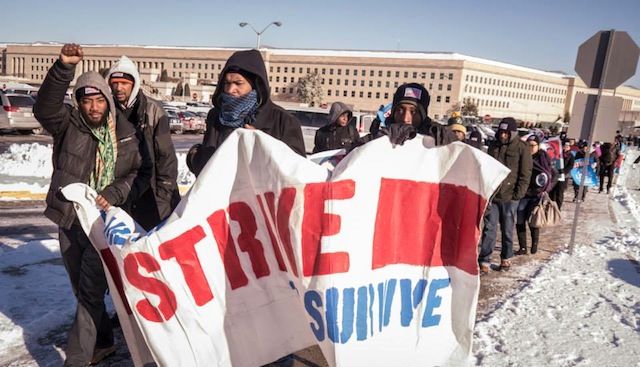 More than an estimated 120 federal contract workers, from the Pentagon to the Air and Space Museum, walked off the job on Wednesday to strike against low wages. The non-union employees are lobbying for President Obama to sign an executive order that would require contract companies with the federal government to pay their employees a living wage.

American taxpayers fund roughly 2 million jobs that pay less than $12 an hour, according to the think tank Demos. A December 2012 Reuters feature called the federal government “one of the most potent factors driving income inequality in the United States.”

Undeterred by arctic temperatures in the nation’s capital, participating federal workers went on strike as part of an effort to move the needle in advance of Obama’s State of the Union address next Tuesday.

If these strikes for a living wage are starting to feel familiar and frequent, it’s because they’ve drastically ramped up in the last year. Wednesday’s demonstrations came in the wake of similar walkouts from fast food workers and Walmart employees battling for higher wages.

Jerome Hardy, a 52-year-old chef at the Pentagon, has become one of the faces of the movement in D.C. His $9 an hour wasn’t cutting it, and he and his son had to move back in with his parents. Hardy’s online campaign had nearly 6,000 signatures on Wednesday evening. From his petition:

I work at the Courtyard Café in the Pentagon making $9 an hour. I’ve been working at this restaurant for eight years and have never received a raise. I don’t get any sort of benefit like health care insurance or retirement savings from my employer. I don’t have sick days, and I haven’t taken a vacation since I started, because I can’t afford to go without pay.

He goes on to detail how his teeth are decaying due to years of neglect and lack of dental insurance, and how he struggles to pay for his son’s school supplies.

It’s clear that $9 an hour isn’t a living wage in this country. While some cities and states have taken the issue into their own hands, and despite the president’s proposal to raise the minimum wage — a notion that Sen. Marco Rubio called “stale” — federal lawmakers have yet to seriously consider ways to buoy low-wage workers.

Not only is it bad optics when the guy cooking your food can’t support his son, it’s much worse for the country’s rapidly widening inequality.