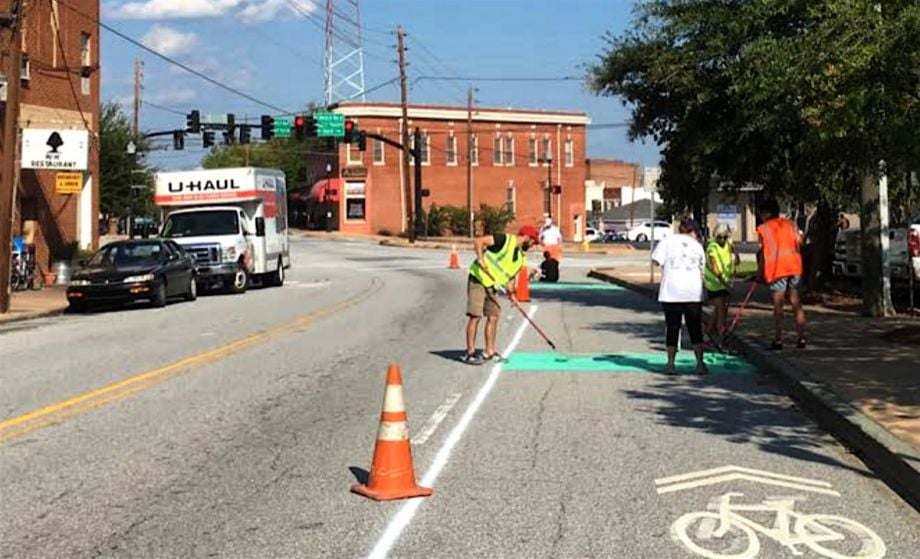 Preparations for a pop-up bike lane in Macon, Georgia (From Macon Connects)

Fittingly, tactical urbanism has evolved rapidly in the last decade. The planning approach, which deploys quick, light-touch changes to show ways street design can be improved, began as a form of activism, with citizens making overnight alterations without official permission. Today, there are still plenty of guerrilla urbanists asking for forgiveness rather than permission (looking at you, toilet plunger-wielding bike advocates of Omaha), but many cities are now experimenting with sanctioned pop-up projects that last for a few days or weeks to demonstrate new designs.

Last week, in partnership with the city, advocates in New Orleans installed a temporary protected bike lane on St. Bernard Avenue, the first such example of protected infrastructure in the city. In Macon, Georgia, a city-sanctioned pop-up bike lane network led to permanent changes. In July, the city of Fayetteville, Arkansas, took things a step further with the launch of their new tactical urbanism program. Citizens now have an official pathway to apply for and get permission to make changes to their neighborhood streets.

The city created a guide to the types of projects allowed, where they can go, the timeline for approval and installation, and other important details. The guide allows for a broad range of projects impacting the “built environment” from bike lanes to sidewalks to street trees to parklets to road diets. But it specifies that projects can’t go on state highways and aren’t likely to be approved on arterial streets or streets with a speed limit over 25 mph. The city will provide feedback and suggestions on designs before approval and get involved in the installation. The guide says groups should expect approval within 10 to 55 days, depending on the scope of the project.

“We’re obviously huge proponents of this. It’s kind of a pressure release valve in two directions. As a citizen, you don’t feel disempowered. You can make changes on your block, in your neighborhoods. But also city departments tend to be frustrated with the pace of change and this accelerates it,” says Mike Lydon, principal at Street Plans, an urban planning and design firm. Lydon is co-author of a tactical urbanism how-to book and a new guide to tactical urbanism materials and design.

Street Plans played an early role in the creation of Fayetteville’s tactical urbanism program. Last November, they led a workshop with the city to craft policy that encourages city-citizen collaboration. As part of the workshop, they installed a pop-up bike lane and crosswalk on the street just outside the building in which it was being held.

Fayetteville ran with tactical urbanism from there, working on creating its official program and guidelines. As a trial, in January they allowed volunteers to temporarily replace a four-way stop with a roundabout. When the program officially launched, it did so with several projects ready in the pipeline. Michael Ward, a downtown developer, recently installed painted crosswalks and curb extensions at the intersection of Church Avenue and Center Street. “Cars tend to roll through the intersection,” he told the Arkansas Democrat-Gazette. “Sometimes they stop and sometimes they don’t. It’s unclear who really should be walking and who should be driving.”

Lydon and Street Plans are working with five other cities on similar codifications of tactical urbanism.

“We’re helping design policy that’s intended to be flexible and is able to respond to issues that come up that you can’t account for in a vacuum,” says Lydon. “You can’t necessarily create the best design on a computer screen. You need to work things out in the street and this is the best path for doing that.”

Jason Roberts is head of the Better Block Foundation, a group that helps groups design and implement sanctioned tactical urbanism projects in cities around the U.S. He thinks that cities’ adoption of the tactical urbanism approach was, if not inevitable, certainly necessary.

“We’ve found that the old systems people are using to change places aren’t working anymore. So this is not only exciting but needed,” he explains.

Of course one benefit of quick change projects is that street improvements come a whole lot faster than a city likely could implement with a traditional process. But Roberts thinks one of the best long-term benefits of tactical urbanism going mainstream is the way it reduces barriers for people to get involved with changing their neighborhood.

“It’s creating a larger pool of expertise on what can be done to improve the public realm,” he says. “It’s getting communities more tools and resources and knowledge about the possibilities to create more dignified places.”

I asked Lydon, given tactical urbanism’s activism roots, if there was anything lost in the move toward a city-sanctioned model. “There’s a loss of spontaneity,” he says. “You start to lose the appeal or even the impactfulness of going directly against authority.”

But, he argues that the goal of guerilla urbanism is fundamentally to get a city to make permanent changes for the better. “If you want something installed long-term, you need the city involved,” he says, “so why not tear down that barrier to begin with?”

Even if every city adopts a similar official approach to tactical urbanism, it’s unlikely that they’ll see the end of unsanctioned activism.

“There’s always going to be a need for people to push things forward with certain types of projects the city may not be comfortable with,” Lydon says. “There’s still a lot of room on the edges for citizens and activists to push the envelope.”