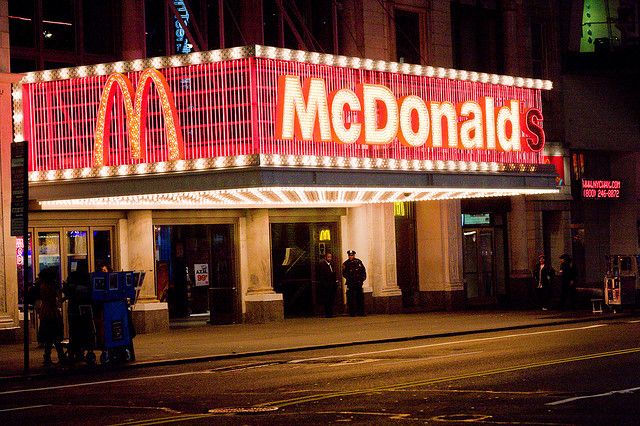 Fast food workers are walking off the job in protest this week from Kansas City to St. Louis to New York City. Employees of grease mavens like McDonald’s and Wendy’s are fighting not only for higher minimum wages, but the right to unionize as well. They want to be treated with a modicum of respect and get a modest slice of the industry’s $200 billion pie.

Though President Obama has pushed for an increase in minimum wage to $9 an hour, many fast food workers still make the bare, federally-required minimum of $7.25 an hour. They’re seeking $15 an hour, nearly 66 percent higher than the $9.02 fast food cooks earn on average, according to Bloomberg. You can’t blame them. Minimum wage is not necessarily livable wage, especially in cities where affordable housing can be scarce or, at worst, a lottery.

Jake Blumgart wrote in October about strikes at Walmart — a company that has had its own recent battles with minimum wage requirements — and how low-paying jobs are growing while the wage isn’t:

“Across the country, one out of every four jobs now pays less than $10 an hour and are largely concentrated in these traditionally low-paying sectors, according to a recent study by the National Employment Law Project. These sectors are growing faster than overall employment in the U.S., and the Bureau of Labor Statistics estimates that the next decade will bring more of the same.”

More of the same. It’s hard to believe that these corporations can’t afford to pay employees more than $7.25 an hour. Yes, yes: That’s all they’re required to by law, why should they pay more? But let’s say they meet somewhere in the middle and Burger King sets its minimum wage at $11.25. That’s certain to lessen BK’s profit margin, but it could be a sound investment in its own workforce.

Costco has been the vanguard of huge corporations paying their workers livable, dare we say fair wages. Hourly workers make an average wage of $20.89 an hour, according to Bloomberg Businessweek. Many Costco employees receive benefits. And get this: Costco isn’t taking a hit because of it. The store’s profit jumped 19 percent to $459 million last quarter. Employee turnover is low and productivity high. Paying employees livable wages can make actual business sense.

I don’t think unions are the right answer for fast food workers, but every activist from coast-to-coast should consider bringing up the Costco argument. Their model is different than, say, Taco Bell, sure. But it still shows that big corporations can afford to pay their employees a livable wage. And if employees make a livable wage it’s a good bargain for the whole neighborhood — you can’t discount the benefits of more disposable income for residents. And, if you want to gift wrap a nice narrative, Taco Bell employees might have a little more cash for a Costco membership, so they could save on groceries.

Look at where these strikes are happening: Chicago, New York, Detroit, St. Louis, Milwaukee, Kansas City, Flint. It reads like the alumni letter from an urban studies program. It’s no fluke that the first stirrings of an uprising, if we can call it that, came back in November in New York City. While Walmart has balked at Washington, D.C.‘s living wage regulations, fast food restaurants aren’t leaving cities anytime soon. Wendy’s isn’t some local bodega that’s being priced out of the neighborhood. They can afford the rent and benefit from the foot traffic and brand recognition.

There are five McDonald’s within walking distance of my apartment in Crown Heights, Brooklyn. We can argue against the health merits of fast food and how it perpetuates obesity, but the fact of the matter is fast food will always be a fabric of the urban core. The best we can hope for is better wages for workers.