Fargo Plans to Replace Its Sandbag Defense – Next City 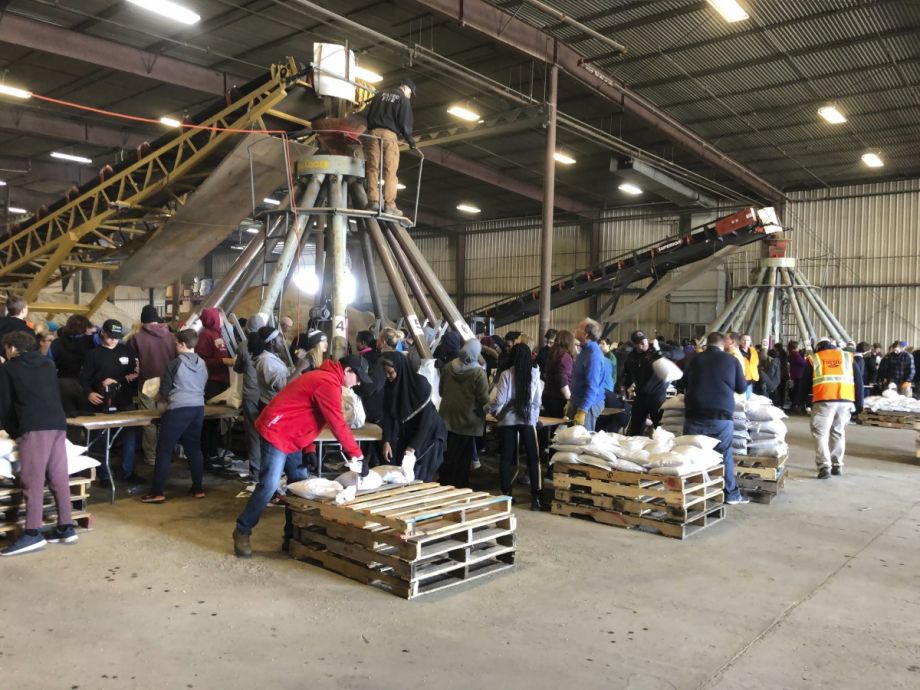 Volunteers help fill, tie and stack sandbags in Fargo, N.D., as the city prepares for major flooding in mid-April. The bags are filled by a so-called spider machine that funnels the sand through 12 metal pipes as the city hopes to fill 100,000 bags a day to reach its goal of 1 million bags in two weeks. (AP Photo/Dave Kolpack)

Amid fatal flooding in the Midwest due to snowmelt and heavy spring rain, Fargo, North Dakota, opened what it calls Sandbag Central on March 26. The city asked for volunteers to help fill 1 million sandbags. Communities pulling together in this way sparks a civic pride in the United States, but to defend cities like Fargo against flooding, the approach isn’t sustainable. That’s why the city is looking to a long-term infrastructure solution.

Ten years ago, Fargo’s north-flowing Red River crested at 40.84 feet thanks to conditions similar to those seen today: a largely frozen ground, snowmelt, and spring rain and snowstorms. A similar disaster that occurred in 1997 prompted the launch of a program to buy up flood-prone homes in Fargo. Since then, the city has purchased and removed hundreds of properties from high-risk areas.

According to Jim Gilmour, Fargo’s director of strategic planning and research, the ongoing project has seen the buyout of nearly 400 homes, with about 240 of those purchases happening after the severe 2009 flood. The city spent over $250 million since 2009, recouping only a small fraction through auctioning off some of the property acquired to successful bidders willing to pay to move the houses, sheds, and the like to flood-safe locations. The buyout project is funded through a mix of local, state, and federal dollars from sources like FEMA grants, but the city voted to cover its share of the costs through sales taxes.

“As the city goes into this next flood prep, there’s a lot fewer homes that are going to require sandbags. In 2009, there were over 6 million sandbags used along the river. If we have that same level of flooding this year or slightly higher, the number needed is less than 1 million,” Gilmour explains. “It’s one of the things the city has done to make this easier to fight.”

Using sandbag dikes as a flood defense requires volunteerism, which can wane over time. “Our engineering department has been through this too many times,” Gilmour says. While the 1997 and 2009 floods stand out, Fargo endured four floods in five years between 2009 and 2013. “By the end, it was getting harder and harder to recruit volunteers. There was a burnout in the community. We can’t rely on [high school students] getting out of class each year — that’s no way to have a secure city.”

Gilmour lauds the volunteers’ efforts, but to eliminate the need for Sandbag Central, the city wants to create a diversion channel around Fargo.

Gilmour hopes to see advancement this year on the FM Diversion Project (FM stands for Fargo and its neighbor across the river, Moorhead, Minnesota), which will include flood gates to control the Red River, floodwalls in the city, a southern embankment to keep water out of the metro area, and an upstream mitigation area. Funding will come from the federal government, the states of North Dakota and Minnesota, and local sales taxes. Completion of the project is expected to take six or seven years.

Dr. Dinesh Katti, a civil engineering professor at North Dakota State University in Fargo, sees the project as critical not just for the Fargo-Moorhead area, but for the state and surrounding region. “Is it expensive? Absolutely, but it’s what’s needed to save a city like Fargo from almost certain flooding down the road,” he says. “One should think of this more as an investment in the future of the state and the region.”

Katti explains that Fargo is home to a variety of businesses like Microsoft and Bobcat in addition to a significant portion of the state’s population. If the area’s flooding goes unaddressed, the region risks the potential economic and social impacts of people and businesses leaving and new businesses and residents deciding not to come in the first place.

“Once you have significant damage from natural events, it takes a lot of time for things to get back to normal. Trying to fix the problem later on is a lot more expense,” Katti adds. He cites successful diversion projects in Winnipeg, Canada and even of West Fargo’s Sheyenne River, which has led to expansion and growth of the city thanks to the protection it provided in the 1997 and 2009 floods, among others.

The Fargo-Moorhead diversion channel will make some areas slightly more prone to flooding than they currently are and requires paying out some farmers for the delay in planting it would cause on their land. The Diversion Authority, the group that oversees the project, would also buy out homes if necessary.

When the project first broke ground in April of 2017, it did so with a backdrop of protesters, many of whom came from their homes or farms upstream from the dam site. One farmer, Don Cossette, told the West Fargo Pioneer that the Diversion Authority wasn’t offering him as much money as those in a more upscale neighborhood to the south were being offered. Another protester who lives on the edge of an area that would potentially increase in flooding would be stuck having to build her own flood protection.

Yet Gilmour sees the project as essential. “Otherwise, there’s a tremendous amount of valuable property — something like $17 billion of public and private property in town [that is vulnerable],” he says. “In 2009 we narrowly escaped catastrophe. We were on the edge of losing portions of the city to flooding and that would have been a huge property and economic loss if businesses would close, so we need some sort of channel to protect the city,” he says.

Meanwhile, volunteers will continue to fill sandbags. “We had 500 or 600 volunteers here today,” Fargo Mayor Tim Mahoney said on March 26. “There was a guy here who must have been 75 years old. It’s a great community builder, but it’s not the best way to build a community. I’d rather do it another way.”