Why I’m an Unabashed Fan of America’s Mayors 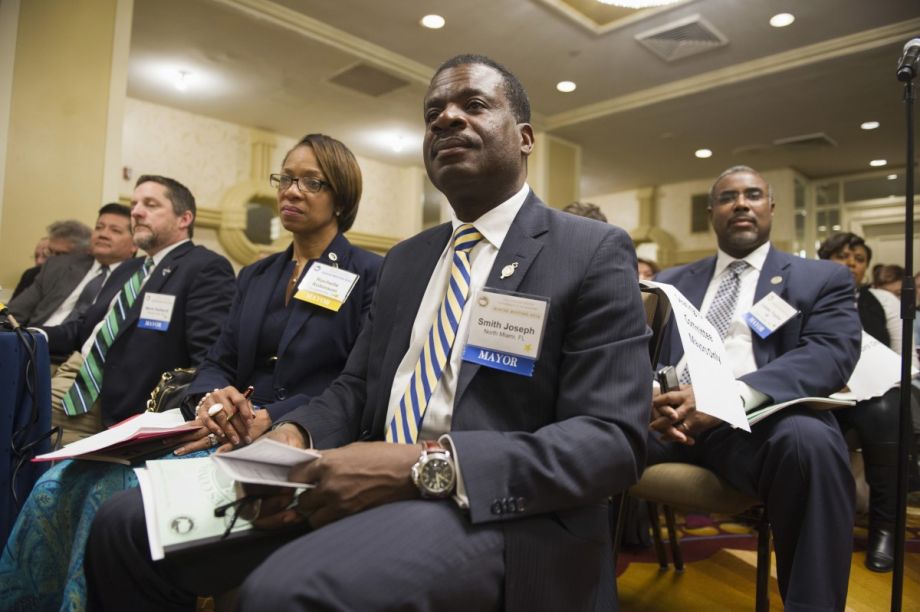 U.S. mayors participate in the Community Development and Housing Standing Committee meeting during a U.S. Conference of Mayors meeting in 2016. (AP Photo/Cliff Owen)

Lobbyists aside, spending quality time with elected officials is not high on anyone’s priority list these days. But I often tell people how much I love walking into a room of mayors.

It’s not just because of their reputation for progressive action, from advocating inclusion and tolerance to closing the gender wage gap. As American politicians go, mayors are cut from a different cloth: They often have the heart of a humanitarian, but they combine it with the management ethos of the accountable executive. They genuinely enjoy meeting new people and hearing from constituents, and those who don’t won’t last long. Some even have the luxury of being above the political fray.

My office, the Boston University Initiative on Cities, leads a rigorous annual survey of America’s mayors, so we spend a lot of time interviewing them about their priorities and views on a wide range of issues. The Menino Survey of Mayors, along with other projects that have us spending time with former mayors, also provide an opportunity to get to know some of the men and women at the helm of City Hall.

We find that mayors are generally focused on three priorities underpinning community vitality: physical, economic and human infrastructure. Mayors seek to provide safe, clean streets and reliable transportation networks, from roads and mass transit to bikeways. They work to build strong, stable local economies with jobs across the income spectrum, and ensure solid municipal fiscal health. But mayors aren’t just concerned with building an attractive stage, they think about the actors on it. As we learned in the 2016 survey, mayors are particularly worried about their constituents living in poverty.

Not all mayors are above reproach, nor do they hold a monopoly on empathy and good governance, but after spending a lot of time with these city leaders, I’ve found most have these five things in common.

Mayors don’t necessarily see themselves as politicians. As one big city mayor told us, “I don’t like politics. I force myself to go through elections, but I’m more of a public administrator than a politician.” Indeed, many mayors have the luxury of political neutrality if they choose; in the 30 largest cities in the U.S., less than a third of local elections are partisan, meaning the mayor does not have to run on a party ticket. Many mayors run for office to solve a problem in their community, like fixing the city’s finances, or because they believe it to be the best way to help people. For most, the title of mayor is not a stepping-stone to more political power or prestige. Three-quarters of mayors we interviewed this year said they had been seriously recruited to run for higher office, but the vast majority also said they would prefer a role outside government as their next gig. Perhaps their reluctance to stay in the political arena should be expected — two-thirds of the more than 100 mayors we talked to have a background in business. Politics is not their natural home.

Mayors like spending time with their constituents. Unlike governors, legislators and members of Congress, mayors have the benefit of constant — even unrelenting — face time with those they serve. They live among them every day. As Lisa Wong, the former Mayor of Fitchburg, Massachusetts, said, “being mayor is one of the most personal jobs out there. You belong to the people. You’re shopping in the community, you’re living in the community, you’re working there, you’re serving the people. It is a 24/7 job.” It’s not simply that mayors have to spend time with their constituents, most prefer to. Even with a wealth of new engagement technologies available to them, the majority of mayors say they rely on face-to-face interactions, including events, informal interactions and — yes — community meetings to stay in tune with constituent needs.

Mayors surround themselves with diverse voices. When I need to feel hopeful about the future of public service, I just look around City Hall. The corridors teem with both longtime civil servants and young staffers who reflect the incredible diversity of America’s cities. And cities of all sizes have formal advisory groups, such as youth councils, women’s councils, and immigrant or African-American commissions, which yield even more voices and perspectives. Mayors also value fresh perspective and may seek talent from beyond city limits. When Michael Nutter, the former mayor of Philadelphia, first took office he said he drew inspiration from former President John F. Kennedy’s push to ignite a generation’s interest in service. To build a team for his new administration, Nutter “put out a call to the best and the brightest, and thousands of people from across the country sent their resumes.”

Mayors are doers, and the best kind of impatient. In the United States, a tremendous number of powers are devolved to local government, where responsibilities may include trash collection, public safety, housing, education, mass transit, snow removal, zoning, health code enforcement, building inspections, animal control, library services, maintenance of parks, streets and open space, provision of water and sewer … and so on. The mix varies depending on city size, region and other factors, but local government is generally responsible for our quality of life on a day-to-day basis. When it comes to overseeing that portfolio of duties and making improvements, many mayors seem to possess a relentless drive to make every day count. One mayor, a former city councilor, described his realization that the pace of the job was unrelenting: “When you are a legislator, time is your friend. You can put in a piece of legislation, take a break, take some time, work on it some more … . For the executive, time is your enemy. There is never enough of it.” Speaking pointedly about his colleagues in Washington, another said, “the production rate in Congress would make me crazy in less than a month.”

Mayors are gearing up for a political fight, whether they like it or not. Cities’ battles with the federal government over President Donald Trump’s immigration policies have been making headlines and show no signs of easing. With Republicans now controlling the majority of state legislatures and governorships, along with Congress and the White House, and Democrats still holding the majority of mayors’ offices, new tensions will inevitability arise. Most cities lack home rule (which itself doesn’t confer true autonomy) and have always had to contend with and defer to their legislatures. Still, examples are rife of new efforts to override local control, from the Tennessee legislature’s initiative to stop a mass transit project in Nashville to the Pennsylvania legislature seeking to preempt Philadelphia’s recent pay equity law. Thankfully, we also find that mayors are natural collaborators. In the battles ahead, they will find a way forward.

More than ever before, it feels as though these reluctant politicians are also America’s conscience, using their roles as public servants to listen to and lift up the most vulnerable. If my son someday tells me he’s running for class president, I might just wish he were running for class mayor instead.

Katharine Lusk is the executive director of the Boston University Initiative on Cities and served as an adviser to late Boston Mayor Tom Menino. She's a Next City Vanguard and was a member of the 2016 class.