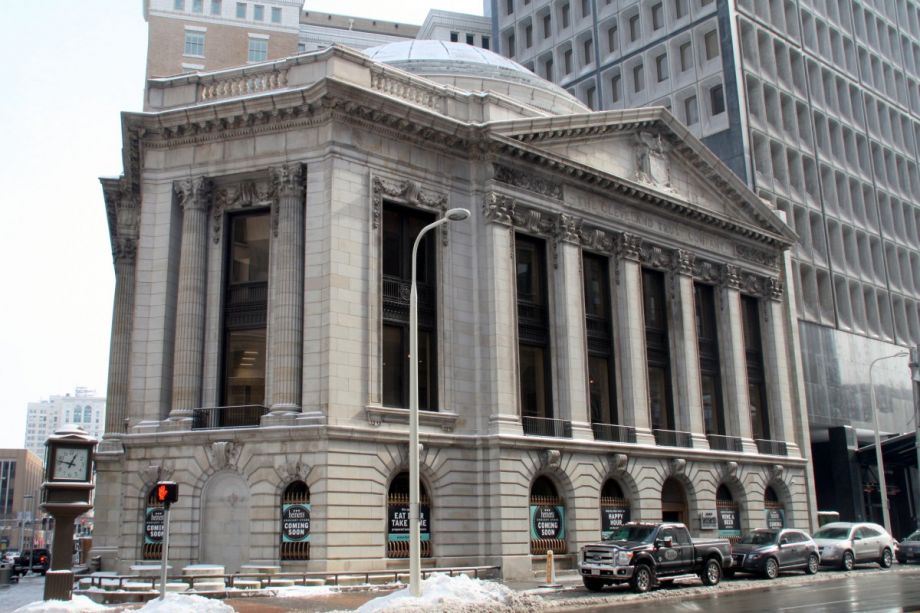 As a child, Jeff Heinen accompanied his mother while she did her banking downtown at the Cleveland Trust Rotunda building at the corner of East 9th Street and Euclid Avenue. Back then, he remembers being “awed by its feel.”

A little more than a month ago, he and his brother Tom opened what’s been called a “cathedral of food” in that exact same space, giving the 1908 neoclassical bank building a foodie makeover.

Groceries are the family business; the brothers are the grandsons of Joe Heinen, who first opened a butcher shop on the east side of Cleveland in 1929. Today, the family has a chain of 19 Heinen’s Grocery Stores across Ohio and Illinois. The newest branch at the historic Cleveland Trust building is the first supermarket of any kind to open in the slowly transforming downtown.

“The conventional wisdom is that a grocery store needs 20, 25,000 people to be feasible,” says Heinen. “There are about 13,000 people in this core area of Cleveland right now. Because there are not enough residents living in that area [to meet that standard minimum], we needed to design a store that appeals to a variety of needs.”

Going beyond the basic provisions and specialty grocery items, Heinen says the store is a place “get a cup of coffee, eat lunch, be a place to hang out and grab a glass of wine after work.”

The store’s architectural focal point is an iconic three-story rotunda with a Tiffany-style stained-glass dome. Before the renovation, the building had been closed since the early 1990s. When the brothers took their initial tours to check out the space, there were areas that were in really poor condition. But the condition of the dome and the character made it an easy sell.

“It wasn’t like you had to step in and have a vivid imagination for how the space could feel,” says Heinen, “You could walk into the rotunda and say, ‘Wow, this is magnificent.’”

The grocery store is part of a larger complex called The 9, a mixed-use $170 million project, which includes a hotel, apartments, and other businesses and amenities. The developer, Geis Companies, used state and federal historic tax credits to help finance the whole thing.

Heinen’s of Downtown Cleveland represents a $10 million gamble by the family that people will continue to find the central business district an attractive place to live and work. “We might actually get to 20,000 people, but that’s a bet,” says Heinen. “And not one you can say, ‘Oh, this should only take 12 more months. We’re talking about four or five more years.’”

“Heinen’s is a very iconic name in Northeast Ohio. They’re very well-known,” says Joe Marinucci of the Downtown Cleveland Alliance. “They’ve got a really good service reputation in terms of their meats, their produce and their seafood. From our perspective, getting someone of that caliber to make the decision to make the move downtown was vitally important.”

The Downtown Cleveland Alliance has helped attract and retain tenants to downtown properties in order to sustain the growth of the district. Their efforts are ramping up to prepare the city for the 2016 Republican National Convention next summer.

“From our perspective, a lot of the work that we are now celebrating in terms of progress we’ve made in downtown Cleveland occurred before the RNC announcement,” says Marinucci. “The neat thing is that when we were working with the site selection committee or the RNC, we were able to show them not only the projects that had been completed, but some of the projects that were underway during their decision-making process.”

“The Downtown Cleveland renaissance is clearly in its early stages, which means that it’s still somewhat fragile,” says Heinen. “When you have organizations like the Downtown Cleveland Alliance who are working to seal up some cracks it’s really helpful and really important. It not only gives the average person thinking about moving downtown, but businesses as well, feel like they have an ally.”

As I mentioned in another article on downtown Cleveland, revitalization claims should be put in the wider context of the entire city. Across the country, there’s often a question of whether city boosters ought to be promoting economic wins when only some residents are seeing the benefits.

In a Belt Magazine article on police violence in Cleveland, a reporter recounts a recent city council meeting, where one elected official voiced these concerns:

… Mayor Frank Jackson didn’t say a word; but then again, he is not big on talking about anything really. City council members pretty much stayed out as well, though Councilman Jeff Johnson did note that the city is spending too much time “patting itself on the back” about things like the Republican National Convention and a new grocery story downtown while the neighborhood streets are unsafe.

Both Heinen and Marinucci mentioned to me that the Downtown Cleveland Alliance offers an “ambassador” service that escorts grocery store guests back to their apartments if they have security concerns.

Heinen says, “My brother and I are lifelong Clevelanders. We’ve seen a lot of ups and downs of the city, but the changes that are happening today in terms of residential living, are very different from years past. From our perspective, hoping to continue the momentum of both people and businesses wanting to be downtown is important to us as a Cleveland company who needs Cleveland to be a viable city going forward.”

He says that most big chains wouldn’t take the risk with only 60 percent of the population needed to support a grocery store.

“It’s the beauty of why people should support small and local businesses,” he says.