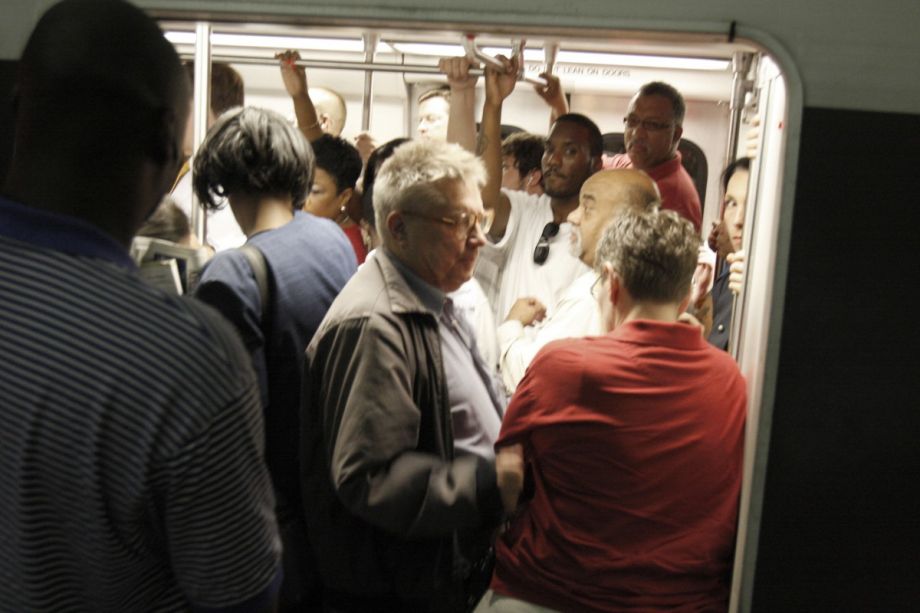 A large crowd of commuters board a red line train at the Metro Center Station in Washington, D.C. (AP Photo/Harry Hamburg)

What’s behind the widespread decline in mass transit ridership in U.S. cities?

Streetsblog USA reports that a TransitCenter survey of 1,700 residents of eight American cities found that two main factors have contributed to the decline: higher car ownership and lower service quality.

The two are joined at the hip. Car ownership has risen in the two years since TransitCenter last conducted this survey, especially among lower-income residents thanks to looser standards for issuing auto loans. Where 43 percent of respondents reported owning a car in 2016, 54 percent said they owned one this year. Most of these new car owners did not quit using transit completely, according to the report; rather, car ownership led them to use it less often.

Those same lower-income residents who have greater access to car ownership find themselves having worse access to public transportation.

That’s because redevelopment and gentrification in transit-rich neighborhoods has driven lower-income residents out of those places and into communities where service quality is lower. The problem was worst in Chicago, Los Angeles, Pittsburgh and Seattle.

Ride-hailing apps also contributed a bit to the drop. While some respondents used Uber and Lyft for “last mile” travel between transit lines and their origins or destinations, others used it as a substitute for transit service, riding transit six percent less often on average. In addition, seven percent of survey respondents who bought cars over the period from 2016 to 2018 bought them in order to drive for Uber or Lyft.

Those who used Uber and Lyft in place of transit, however, cited “slow speeds, limited hours of service, unreliability, and too few stops or stations” as the reasons they quit taking transit.

The article concludes that the best way for transit agencies to reverse this decline is to invest in better service — more frequent, more reliable and less crowded. The study’s authors pointed out that instead of making transit free, agencies would gain more riders if they simply spent the amount of money they would lose from free fares on beefing up service.

Bloomberg reports that the New Jersey Transit Corporation (NJT) has finally buried the hatchet in a two-year dispute with Amtrak over maintenance of shared facilities in and around Penn Station in New York, which serves as one of two main terminals for New Jersey Transit regional rail service into the city.

NJT paid Amtrak $182 million for its share of maintenance costs for the tracks, station and the tunnels under the Hudson River that lead into it. In addition, the state will pay the national passenger railroad a total of $10 million a month under the terms of an agreement New Jersey Gov. Phil Murphy announced at Penn Station Feb. 13. Of that amount, $7 million will go to capital improvements and $3 million towards operations.

Those improvements will include a new waiting room and improved platform access along the Eighth Avenue main concourse, set to be built after Moynihan Station opens across Eighth Avenue in 2021. NJT and Amtrak will also cooperate on the construction of a new train yard in New Brunswick that will keep NJT trains from being flooded in storms.

The dispute arose when former Gov. Chris Christie ordered NJT to withhold its monthly payments to Amtrak after a series of derailments in 2017. Christie accused Amtrak of failing to properly maintain the facilities at Penn Station both railroads use. NJT’s own safety record deteriorated during the Christie administration, however, as the governor made repeated cuts to the state agency’s budget.

New Convenience for Transit Riders in Indian City: Pay Your Tax Bills On Your Way To (or From) Work

Transit patrons in the city of Lucknow in India can now use their fare payment cards to pay their tax bills at the same time they buy their train tickets, Metro Report International reports.

As of last month, riders of the Lucknow metro can use their GoSmartCards to pay their property taxes at station ticket vending machines. The machines will issue receipts for riders’ tax payments, and the payments will post to their tax accounts in three days.

The system will be expanded to cover other categories of bills.

Mayor Sanyukta Bhatia called the program “a commendable move in line with the Prime Minister’s vision of Digital India and cashless transactions” when the service was first offered.