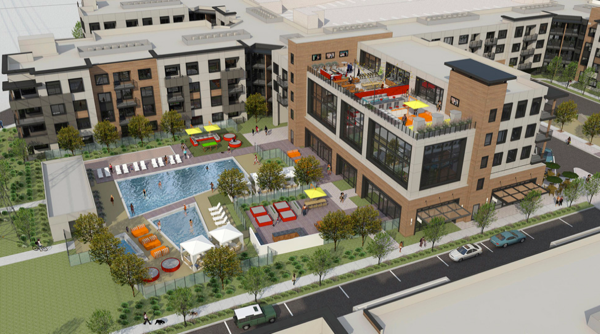 Facebook, it turns out, is working to bring housing close to its campus in Menlo Park, Calif., the Wall Street Journal’s Reed Albergotti reports:

The social network said this week it is working with a local developer to build a $120 million, 394-unit housing community within walking distance of its offices. Called Anton Menlo, the 630,000 square-foot rental property will include everything from a sports bar to a doggy day care.

The Silicon Valley Business Journal had a few more details on the project’s origins back when Facebook’s involvement wasn’t yet public knowledge:

St. Anton Partners has received major city and state approvals to rezone a 10-acre industrial site for a $120 million apartment project that will add nearly 400 housing units to the Peninsula city.

And this from the Sacramento Bee:

Steve Eggert, St. Anton co-founder, said “we’ve enjoyed partnering with Facebook to create new housing in Menlo Park. With the guidance of Facebook and its employees, we have designed a cutting-edge project that meets the needs and tastes of today’s sophisticated renters.”

There’s talk of this thing as the 21st-century company town, but framing it that way seems a bit off. For one, only 15 apartments, according to the WSJ, will be reserved for Facebook employees. Housing dependent on employment would be an interesting development, given that the ability to hop between tech firms is often credited for Silicon Valley’s record of innovation. But that doesn’t seem to be the case here.

What jumps out, instead, is what the project’s designers say they learned from their consultations with Facebook and its employees about what the generally youngish, well-employed person might look for in housing these days. We get more details from KTGY, the architects designing the site:

These features aren’t unique to condo living, necessarily, but it’s telling that the sought-after ideal here is one where you can eat communally steps from where you sleep, and then do some lawn bowling with whatever coworker or roommate might be hanging around. It sounds, of course, a lot like the modern tech campus a la the Googleplex or Facebook’s headquarters itself. It seems to mark an embrace of the blurred lines between your professional self, social self, intimate self, and so on. That does, though, seem to be the trend that American culture is following, in part because of, well, Facebook.