Explore the Unexplored Philadelphia at the Hidden City Festival – Next City

Explore the Unexplored Philadelphia at the Hidden City Festival 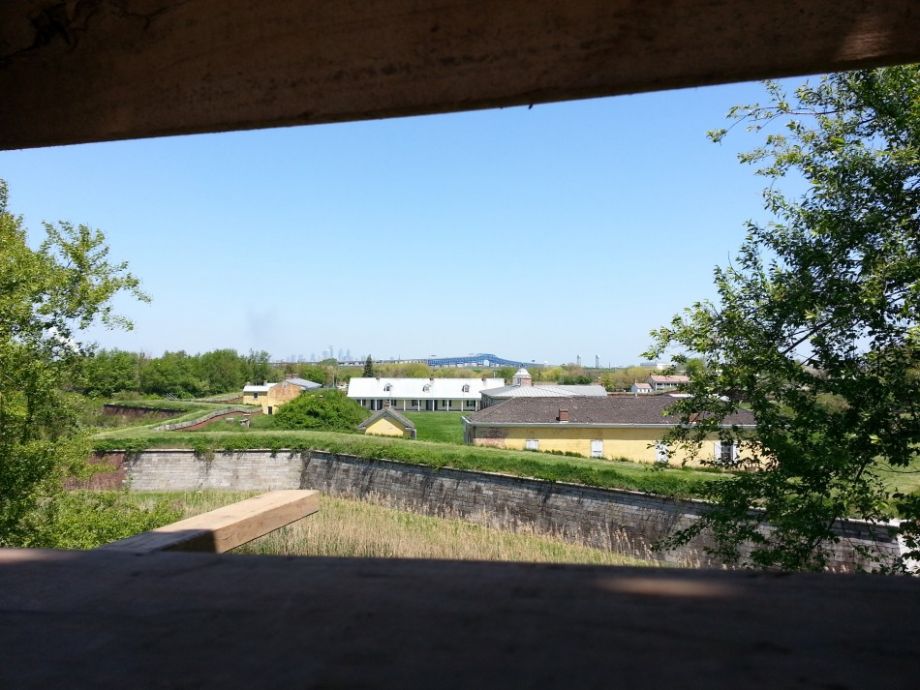 Fort Mifflin on Mud Island, one of nine sites of the Hidden City Festival. Credit: Ruins at High Battery

Wedged between a Sunoco terminal farm, Fort Mifflin and Runway 26 of the Philadelphia International Airport is an all-but-forgotten scrap of swampland at the edge of the Delaware River. This little patch of earth is the sort of place few would think to explore on their own, but a ramble through its rough trails is a small-scale, quasi-urban adventure of the very best sort.

Here on Mud Island, nature and the modern world are in an uneasy balance. Driftwood and discarded water bottles lap up against the shore, and leaves on the low-growing wild shrubs rustle in the breeze as 737s roar past at alarmingly low altitudes.

Fostering the sense of discovery one gets tromping around somewhere this obscure and odd is, in many ways, the reason Hidden City Philadelphia exists.

Born in 2009 in a remarkably successful festival that fused art with nine sites throughout the city, Hidden City has grown into an unusual organization that is part publisher, part urban docent and part curator.

“We joke because we have these three divisions to our very small organization, but they’re all based upon the love of exploring and a desire to help people think about the city as a bigger, more complicated place,” said Nathaniel Popkin, who co-edits the group’s online publication, Hidden City Daily, and serves as its editorial and research director. “We want people to engage in the city’s evolution. Just engage in it.”

Now, for the first time since 2009, Hidden City is sponsoring a festival that once again uses art to connect Philadelphians to city sites that few would have otherwise seen. There are 10 projects in all, at nine sites throughout the city, which will be open Thursdays through Sundays between now and June 30.

One of the more popular projects last weekend was the installation on Mud Island: A series of makeshift structures set around a series of overgrown gun platforms and powder magazines south of Fort Mifflin that’s intended to “invoke both a forgotten past and a post-apocalyptic future” and echoes the “shack settlements that dotted the marshlands of South Philadelphia prior to the 20th century.”

It’s a project that rewards exploration. Following that little traveled trail to the water’s edge is definitely worth it, as is ducking into the pitch-black magazines hollowed into the island’s little hill.

Fifteen miles north, at the Globe Dye Works in the city’s Frankford section, the Dufala Brothers have created a “defunct infrastructure” in the decommissioned boiler room of the old factory, which produced textile dyes for about 140 years before shuttering in 2005. Much of the building has since been converted into studios and small production facilities for artists and artisans, but the boiler room remains a rugged and beautiful window into Philadelphia’s largely decommissioned industrial past.

Other projects — such as temporarily putting the mothballed Germantown Town Hall into active use as a community resource — are clear examples of social practice art, which mashes art, audience engagement and social activism together. It’s an emerging form and a natural fit for an organization like Hidden City.

Since then Squire has largely moved on, but Hidden City Daily has become something of a user’s guide to the exploration of Philadelphia. It began publishing around the same time as many of the city’s other property-centric online outlets, but Hidden City is much less about luxury apartment ogling and much more about inspiring its readers to get out there and not only investigate the city, but try to imagine what it can become.

Hidden City daily does this on a shoestring budget of about $150,000 a year, Popkin said — a figure they’ve reached without the benefit of big foundation grants (excepting support for the festivals).

“There’s all this extraordinary energy stored up in this city-that-might-be, this sense of the possible place of Philadelphia that I really think holds people’s attention,” Popkin said.