Expecting to Boom to 10 Million People, Yangon Plans for Its Infrastructural Future – Next City

Expecting to Boom to 10 Million People, Yangon Plans for Its Infrastructural Future 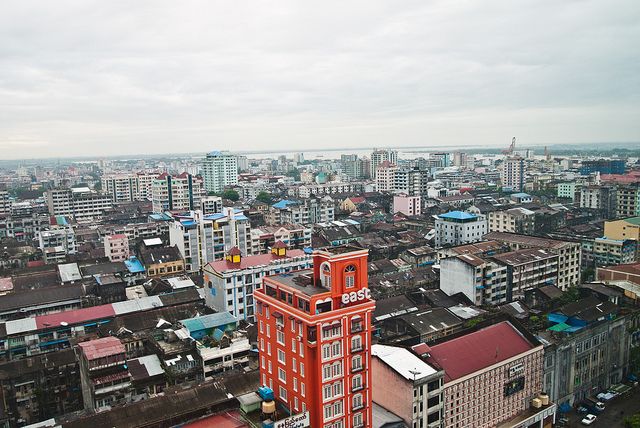 Downtown Yangon is a perfect grid. Built by the British in the 1850s after the Second Anglo-Burmese War, the streets were designed on right angles, it is said, so that wind off the Hlaing River would circulate unobstructed through the avenues of the sweltering city. The Yangon Circle Train connects this old colonial capital with satellite towns that line its border.

These informal settlements bear little resemblance to the crowded slums that buffer the fringes of megacities like Nairobi and Mumbai. In Yangon, people may live in shacks of corrugated metal and other found materials, but they don’t want for land — at least for now.

By 2040, Yangon is projected to have 10 million residents, more than twice its current population. The expected growth will put significant strain on a city already struggling to address its decrepit infrastructure and limited services.

“There is huge need for upgrades here,” says Matsuoka Hajime, a consultant for the Japanese International Cooperation Agency (JICA). “You see the problem in many sectors. The traffic, for instance, has huge issues already.” At the government’s behest, JICA is in the process of creating a 30-year development plan for the city.

It’s not hard to understand why such a plan is necessary. Only 42 percent of Yangon’s citizens have access to running water. Less than 10 percent of the city has sewage infrastructure. While Yangon’s elites have reaped the rewards of the country’s recent liberalization, selling high in the gold rush for city property and assets, little has changed for the urban poor. UN-HABITAT estimates that at least 40 percent of city residents survive day to day in informal dwellings.

The population shift in Yangon isn’t an isolated phenomenon. Over the last few decades, Asia has seen a massive wave of urbanization. India and China alone have close to a billion urban residents.

“For the first time, half of the world is urban,” Abha Joshi-Ghani, the World Bank’s urban development manager, said in a 2009 interview. “And most of the urbanization is taking place in developing countries. For specific regions, Asia and Africa would double in the next 30 years… What we’re saying is that this is an urgent agenda.”

Myanmar’s political and economic isolation has, in the past, immunized Yangon from this level of urbanization. But with the government moving forward on a series of significant reforms, it seems the former capital’s time has come.

To absorb the impending crush of urban migrants, JICA’s plan proposes to add 40,000 acres to the official city area. The design of this broader urbanscape will be based one of three archetypes: “Single-core system,” “sub-center system” and “sub-center with green isles.” The single-core city would develop outward from one economic and industrial downtown hub. The other two offer more geographically balanced approaches, with managed developments spread throughout the municipality with varying degrees of planned green space.

The plan also calls for new commuter rail lines, the development of sanitary waste disposal sites, upgrades to the electrical grid, and the construction of overpasses and wide arterial roads to ease traffic congestion. JICA has committed US$200 million over the next five years to finance investments in these areas.

JICA is not the only financial institution focusing on urban sustainability in Myanmar. The Asian Development Bank has published a sector assessment, which details urban infrastructure needs and possible lending programs. UN-HABITAT, in particular, is working closely with urban municipal leaders throughout the country to provide technical planning, education and support.

As one of its first initiatives, UN-HABITAT announced a project to draft new building codes and develop federal guidelines for land use planning. The announcement came on the heels of a December cabinet meeting aimed at codifying the role of the housing sector in a national development strategy. With participants from a range of ministries, the mandate went beyond simple slum eradication. The meeting touched on the need for land use management, sophisticated financing systems and strategies for wealth generation.

Myanmar (formerly Burma) is only 2.5 years removed from its 2010 elections, the country’s first democratic vote in 20 years. As the new regime solidifies trade ties across the region and bolsters its manufacturing and infrastructure sectors, Yangon will soon dilate like so many of its regional neighbors. Aid agencies are hoping that a sustained effort to implement a comprehensive development plan will mitigate Myanmar’s urban crisis before it truly begins.