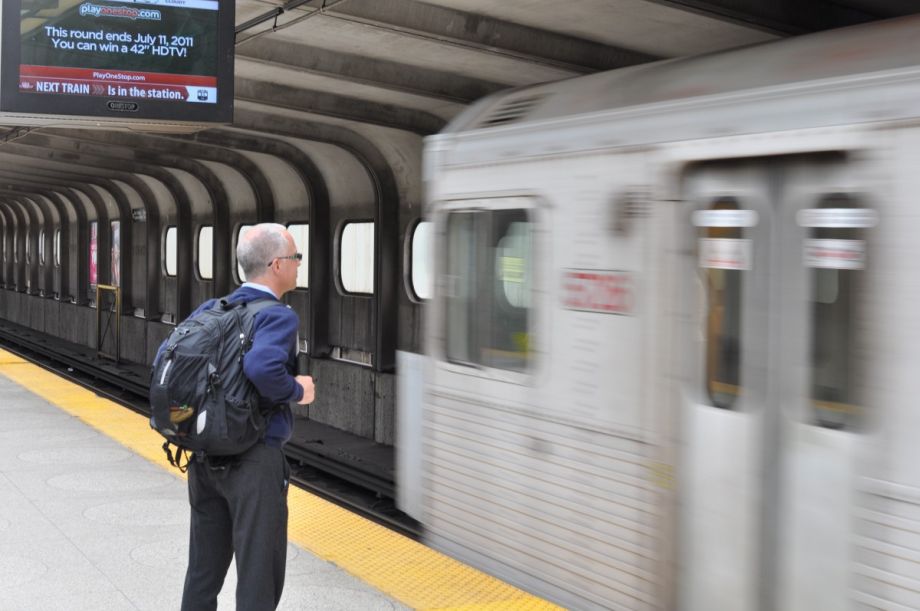 Toronto’s Subway Leaves the City
While most of the talk around Toronto transit expansion has focused on the contentious replacement for the Scarborough RT light metro line, the action was taking place over on the north end of the Spadina leg of Line 1 of the city’s subway.

This past Sunday (Dec. 17), the Toronto Transit Commission took the wraps off the first subway line to cross the Metropolitan Toronto city line.

Railway Track & Structures reports that the TTC Line 1 Extension runs from the former end of line at Sheppard West to Vaughan Metropolitan Centre in York Region. The city of Vaughan is using the new terminal to refashion a shopping center at the site into a pedestrian- and bike-friendly mixed-use development.

“This is a historic milestone for the TTC with the opening of a critical extension of our subway system, with six new stations featuring WiFi, public art, transit connections, commuter parking, the Presto fare system and new fare gates,” said TTC Chair and Toronto City Councilor for Ward 15 Eglinton-Lawrence Josh Colle. “The subway will also be the first time ever that the TTC subway system will cross a municipal border, linking Toronto and York University with York Region with fast and frequent rapid transit.”

The six-station extension cost C$3.18 billion ($2.47 billion U.S.) to complete, with the cost split four ways among the Canadian government, the Ontario provincial government, the city of Toronto and the Regional Municipality of York. Global Rail News notes that the extension is the largest expansion of Toronto’s subway system in nearly 40 years.

According to a news report in Milwaukee’s Daily Reporter, a warm fall and a late ground freeze enabled general contractor Kiewit Corporation to perform work scheduled to take place next spring ahead of time, bringing the amount of track laid to 90 percent of the total.

“It’s fair to say that we probably shrunk two seasons’ worth of work into (one),” Milwaukee Department of Public Works Commissioner Ghassan Korban said.

The expedited construction won’t move the line’s expected completion date ahead, but it will mean less disruption of traffic in downtown Milwaukee when construction season rolls around again in the spring. The 2.5-mile, 17-station route is still set to open at the end of next year.

An Unwelcome Welcome for Canberra’s First Light-Rail Train
While Canberra slept, the first of 14 new light rail vehicles for the Australian capital’s new light rail line arrived from Spain and made its way to a shed in the city’s Exhibition Park in the early morning hours of Dec. 13. Graffitists gave it an unofficial “Welcome Wagon” present that same night.

The Canberra Times reported Dec. 14 on the end of the LRV’s seven-week journey from the CAF plant in Zaragosa, Spain, to Canberra. The trip from the dock to the park took place at night for logistical reasons that included the need to close roads, a spokesperson for Australian Capital Territory Transport Minister Meghan Fitzharris said.

Fitzharris herself was ecstatic about the delivery: “It is exciting to see Canberra Metro deliver the first of 14 vehicles for the project. It’s a nice Christmas present for the city,” she told the Times.

The next day, the Times reported that vandals had made their mark on the car with graffiti. Canberra Metro CEO Glenn Stockton called the tagging disappointing but added, “Of greater concern is that members of the community have accessed a live construction site, which puts them and others at risk.”

The city quickly removed the graffiti and just as quickly beefed up security around the shed.

The ACT Government has not yet announced when the formal unveiling will take place. Construction proceeds apace on the 12-km (7.5-mile) line connecting the city center with Gunghalin. The line is expected to open late next year.