Expanding the Horizon for Homeownership in the Twin Cities – Next City

Expanding the Horizon for Homeownership in the Twin Cities 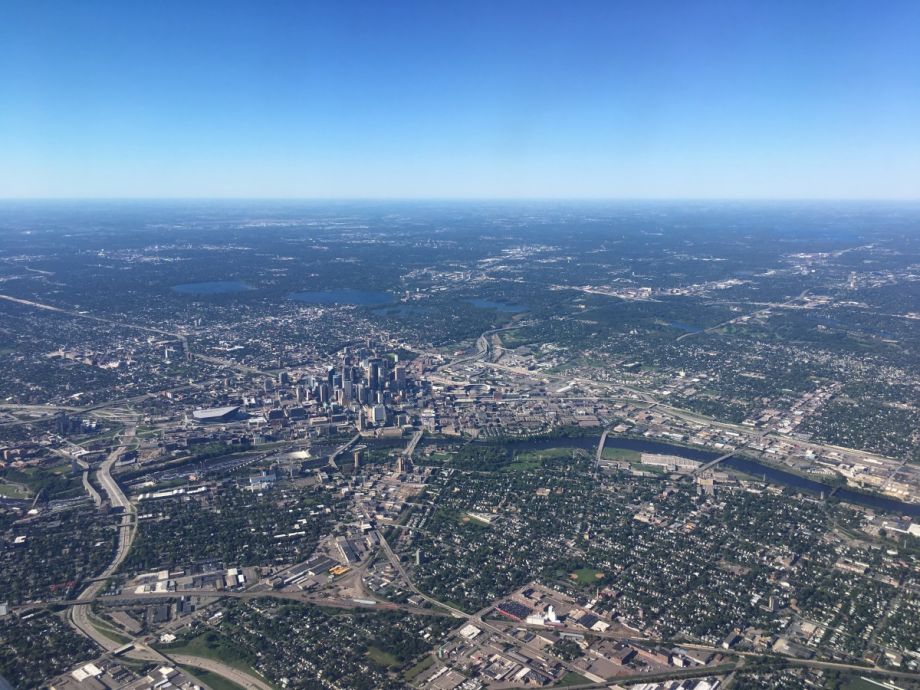 Minneapolis from above. (Photo by Oscar Perry Abello)

A decade ago, Hunde Takele arrived from Ethiopia to the Twin Cities as a “lucky winner” of the U.S. green card lottery. “It was really hard to win,” he says, not just because millions of people apply to the lottery every year, but winning meant he’d move to a new place he had no connections to. “I didn’t know much about North America,” he says, “I had no family or friends here to call and ask. There was no internet to do any research.”

He decided to move to Minnesota because he remembered studying the Mississippi River in school. Once there, he adjusted to the cold weather, the new city, and found work. He met his future wife at church, moving in with her and her two children. They had another child together, and his wife was soon pregnant with another. As Takele built his life — and worked to accommodate his growing family in a one-bedroom apartment — his desire grew to own a home. “That motivation to live the American dream was in my heart as soon as I won the lottery,” he says.

Takele, however, had no idea the difficulty ahead. He had limited credit and worked multiple jobs; his income couldn’t secure a loan high enough to buy a house. He visited over 100 banks, where one loan officer told him to “go work more” and come back when his annual income hit $80,000. “Years of hunting for a house, I found disrespect in every bank,” he says.

On a whim, Takele visited the office of Twin Cities Habitat for Humanity and was surprised to find the organization could potentially help him. In 2017, Twin Cities Habitat launched its Open Market Program as part of a four-year plan to more than double the number of families it partners with to buy homes.

The initiative to expand its clientele, particularly to reduce Minnesota’s racial gap in homeownership, got started about three years ago, says Pamela Wheelock, chief operating officer of Twin Cities Habitat.

Twin Cities Habitat recognized a “gap in the marketplace of the availability of a lending product,” Wheelock says, for families making up to 80 percent of the area median income.

“Habitat would continue to work with the lowest income families,” Wheelock says. But, noting the organization builds up to 50 homes a year, he explains, “We had to think strategically about penetrating that 50 to 80 percent [of area median income], where families should be able to find homes in the open market if they had a lending product accessible to them and supportive of moving them into homeownership.”

Most Habitat for Humanity chapters around the country build homes, offer homebuyer education, and serve as mortgage lender. The Twin Cities builds on that with a partnership with a local bank to support an Open Market Program, says Robyn Bipes-Timm, who leads Habitat’s mortgage lending and is president of Habitat’s wholly-owned nonprofit lending subsidiary, TCHFH Lending, Inc.

Last year Bremer Bank — which is owned by a foundation, giving it more flexibility for community-focused lending — agreed to purchase up to 500 below-market Habitat mortgages over the next four years.

“[Selling the loans to a bank] gives us a source of capital to originate more loans, and it was instrumental to our growth,” says Bipes-Timm. In the first year of Open Market implementation, Twin Cities Habitat closed on 92 homes, the highest number in its 30-year history.

The offering with Bremer Bank, a 30-year mortgage at three percent interest, addresses common barriers to homeownership like Takele face. As a lender, Habitat is flexible with credit scores and works with lower-income clients, many of whom work several jobs and don’t have the employment history required for a traditional mortgage. The loan does not require mortgage insurance, which can add thousands of dollars to the cost of homeownership. Habitat also uses grants to provides down payment assistance to make sure the family isn’t paying more than $3,000 at the closing table, according to Bipes-Timm.

Before his purchase, Takele spent several months working with Model Cities, a Twin Cities Habitat partner, in homebuyer education, working to raise his credit score and reduce his debt to income ratio. That was followed by homeownership classes through Habitat. When he was approved for a loan up to $256,000, he says, “I almost passed out because of joy.”

Even though Habitat developed a mortgage that worked well with a wide range of buyers, the organization faced another challenge: the hot, fast-paced housing market in the Twin Cities.

Habitat partnered with local real estate agents to help homebuyers navigate the competitive marketplace. The Open Market Program, by design, allows buyers to expand their search beyond Habitat’s existing footprint in the Twin Cities, into cheaper markets outside the city. Roughly 70 percent of purchasers in the first year bought in suburban areas, according to Wheelock. “It’s helped our scatter diagram of where Habitat homes exist,” she says.

In February, Takele moved into a four-bedroom home in the Lakeville suburb. His second child was born soon after. “We are comfortable now,” he says.

Twin Cities Habitat’s goal is to close over 100 homes in its second year, an effort coupled with strategic outreach to potential homebuyers. The organization, for example, is reaching out to major employers with diverse workforces within the 60 to 80 percent area median income.

“A lot of these families don’t think of Habitat, and aren’t aware they can buy homes on the open market,” says Wheelock. “They think of homes we build for lower-income families. We’re increasing awareness there’s a new opportunity available to families that may not have thought of us previously.”