Exhibit Showcases the Architecture of Urban Latin America – Next City 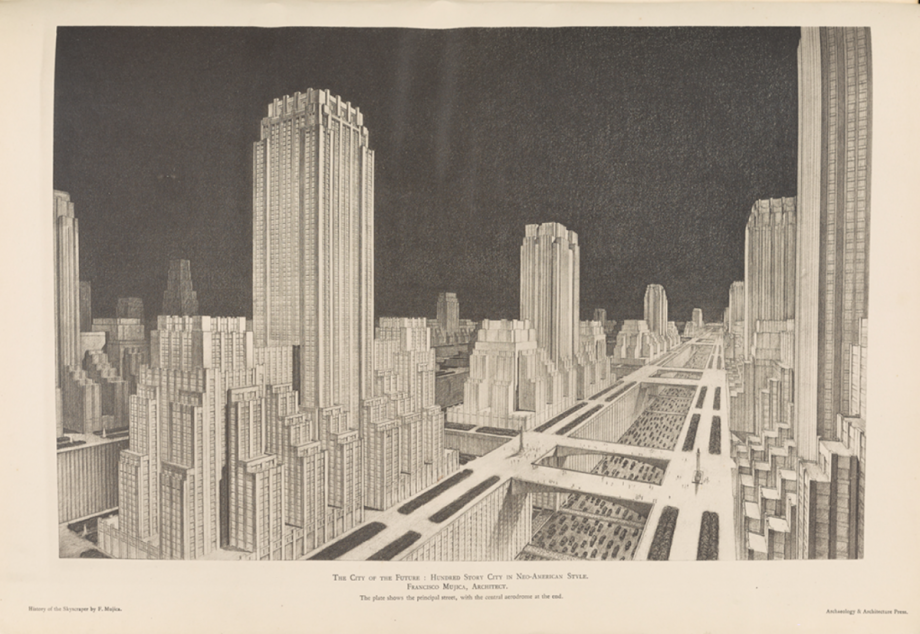 “The City of the Future: Hundred Story City in Neo-American Style” by Francisco Mujica, from “History of the Skyscraper (Paris, 1929)” (Credit: The Getty Research Institute)

The architectural shifts of six Latin American capitals between 1830 and 1930 tell a complex story of post-colonial identity. From the Spanish grid layout — mandated by Carlos V and Felipe II of Span and arranged around a central plaza, cathedral and town hall — to a brand of urban planning that scraped away all vestiges of colonialism with clean, European-style civic spaces, to motifs that both uplifted pre-Hispanic art and playfully subverted “Mission”-style structures, that story is told in the upcoming exhibit “The Metropolis in Latin America, 1830–1930,” opening Monday at the Americas Society in New York.

The exhibit is part of “Pacific Standard Time: LA/LA,” an “exploration of Latin American and Latino art in dialogue with Los Angeles,” according to the Getty Research Institute, where “The Metropolis in Latin America” was formerly displayed.

“The cities of Latin America maintained most of their colonial structures until the mid-nineteenth century,” according to the paper. “The gradual adoption of modern architectural repertoires, coupled with massive rural migration to the cities, encouraged the removal of colonial-era vestiges in favor of new civic buildings, burgeoning residential quarters and centers of industrial production.”

With that industrialization came wealth — for a few, at least. As the exhibit’s co-curators Idurre Alonso and Maristella Casciato point out in a detailed Getty article, an urban bourgeoisie emerged, and their disposable funds “propelled the growth of outdoor spaces for leisure such as promenades, public parks, and botanical gardens.” Meanwhile, hoping to incorporate more “wild” landscapes into the cityscape, urban planners “created largescale projects that reshaped nearby natural features such as Rio de Janeiro’s Corcovado Mountain, Santiago de Chile’s Santa Lucía Hill, and Mexico City’s Chapultepec Forest,” Alonso and Casciato write.

Eventually, planners turned away from Europe and toward their countries’ indigenous histories — and also toward idealized versions of colonial architecture.

“National pavilions designed for the Paris (1889), Panama-California San Diego (1915), and Ibero-America Seville (1929) expositions showcased how Latin American countries called up native architectural idioms in order to foster their identities,” according to Alonso and Casciato’s article.

“Through opposing experimental positions, the metropolis in Latin America became a laboratory where scientific planning mingled with a romantic attachment to natural environments,” Alonso and Casciato write.

The exhibit will run until June 30. The full Getty article is available here.