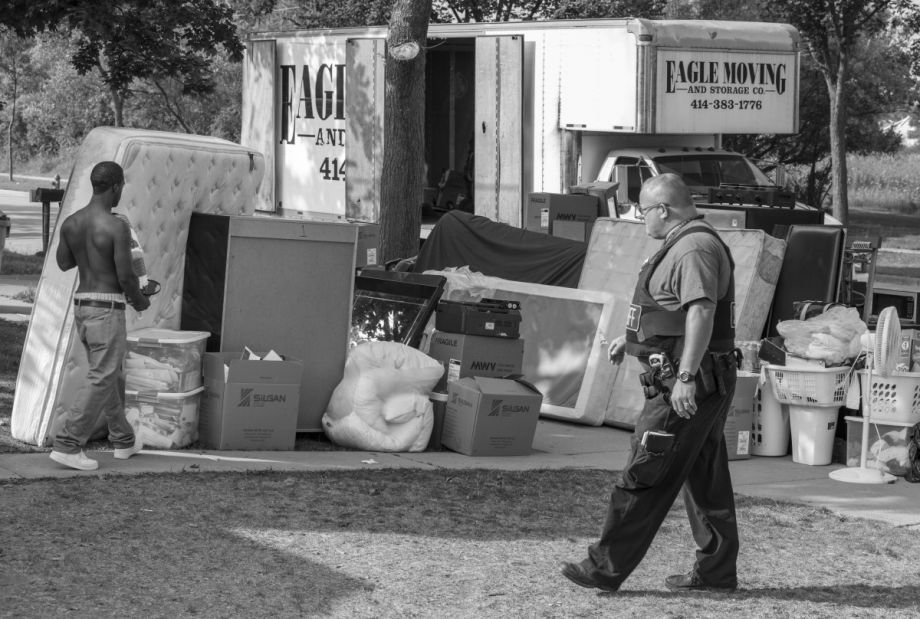 For those who were intimidated by “Evicted,” Matthew Desmond’s 400-page tome on eviction and poverty in the United States — perhaps you really meant to get around to reading the 2016 Pulitzer Prize winner — the National Building Museum in Washington, D.C. is now presenting a bite-size exhibit on the topic.

The Evicted exhibit may be digestible, but it won’t necessarily go down easy.

Eviction touched 2.3 million people in the year 2016. That number, said Desmond at a press preview for the new exhibit, is twice the number of Americans arrested for drugs, 36 times the number of drug overdoses yearly. Yet only recently have people been talking about eviction.

“Poor folks have always struggled with housing in this country,” says Desmond, “but this seems like something new, something acute.”

On display until May 19, the exhibit makes the pain of eviction clear. In three small rooms, museum staff have constructed houses that are inside-out: Wallpaper lines the outside, doorknobs jut out from odd places, and walls don’t extend from floor to ceiling. Inside, museum visitors can view photographs and audio slideshows from people telling their stories of eviction.

The inside-out homes are meant to be “stark, unsettling,” curator Sarah A. Leavitt says. “I hope when visitors come in they’ll be confronted with this crisis, not just on a macro way but in a personal way.” Each one is designed to complement the content inside, so that, for example, the “house” with a video depicting housing court is closed off, with no doors and only a small window so viewers can see the video.

Leavitt says that during the process of putting together the exhibit she spent time sitting in D.C.’s landlord-tenant court — ironically across the street from the museum (and visible from the windows of the exhibit). “It was a sobering experience,” she says. The closed-off house “physicalizes” the feeling of being “on the outside, you don’t understand what’s going on.” Even the floors of the show, Leavitt says, are intentionally “gritty.”

In addition to the photos and slideshows, the homes depict statistics about eviction graphically: a set of keys shows how eviction disproportionately affects black women. Another chart shows the affordable housing shortage, a third how wages have stagnated even as housing costs have risen. A map near the entrance shows the eviction rate by state—a simple dataset that, until recently, couldn’t be found anywhere.

Desmond’s Eviction Lab, which recently launched, collected 83 million housing court records going back to 2000 to try to put a number on evictions. The lab found, for example, that 900,000 eviction judgments took place in 2016 alone, meaning landlords were legally allowed to remove one in 50 households. The data, as the New York Times put it, are “probably conservative: They include only households that touched the legal process, not those in which people moved with an informal warning. The data undercount places where eviction records can be sealed or are harder to collect.”

Despite the hard work of the Eviction Lab team to bring these records to light, Desmond laments the fact that there is no national government tracking of eviction statistics. “It shouldn’t rely on the whims of a researcher,” he says. “Like, what if I get bored in a few years? This is too big and too important for us not to have publicly accessible national data on it.”

The exhibit is a departure from the Building Museum’s more standard fare of shows celebrating architecture and interactive monumental sculptures, but not as much a departure for Leavitt, whose previous shows for the museum included the haunting Architecture of an Asylum exhibition on St. Elizabeth’s, and a show about community policing in D.C. (She also curated more standard Building Museum fare such as House & Home, a show about domestic life, and House of Cars, about parking garage innovations.)

But if this is a new direction forward for the Building Museum, it’s a promising one. Museum exhibits, even small ones, have the potential to touch people more viscerally than a book.