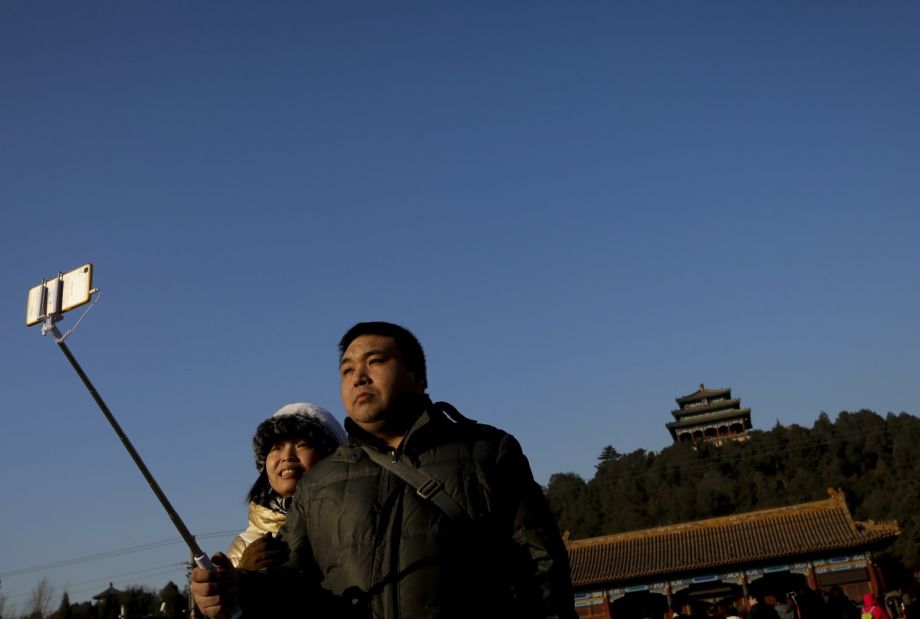 A couple in Beijing takes a selfie on one of the city's rare “blue sky” days. (AP Photo/Andy Wong)

There may be better known climate evangelists like Al Gore and Bill McKibben, but in the clubhouse of environmentalists with the ability to effect real change, there may be no more prominent figure than Erik Solheim. As the head of the United Nations Environmental Programme, the former Norwegian minister has one of the world’s foremost bully pulpits to talk about the importance of environmental action.

For centuries, cities have been seen as environmentally destructive, choked with air pollution and industrial runoff. And while many still struggle with the ecological repercussions of bad development, others — even famously polluted Beijing — appear to be turning a corner, implementing greener policies and building for a more sustainable future. Today, in fact, it’s often said that cities are the world’s best chance at averting the catastrophic effects of environmental decline. At World Urban Forum 9, Next City checked in with Solheim to find out whether he agrees, and how an environmentalist views the future in an increasingly urbanized world.

Are urban dwellers the best environmentalists?
There’s a lot of truth in that. You can much more easily use most transport systems if you live in a city. It’s much easier than having a private car. People also tend to use less energy, because it’s more energy efficient living in a building where a lot of the other people are living.

Former UN-Habitat Executive Director Joan Clos was fond of saying “urbanization is a tool for development.” Do you think that urbanization is also a tool for environmental sustainability?
The huge global population can only be accommodated by most people living in cities. If you take Africa as an example, where we have the most rapid population growth, people have to be distributed. There are huge environmental benefits by urbanization.

But most importantly with this strong global trend towards moving into cities, we need planned energy-efficient cities with mass transit systems and a good system for garbage. There are huge opportunities for people moving to cities. And no nation will move into prosperity without urbanization. We should not at all be afraid of urbanization.

Is there a flip side to urbanization’s role in environmental sustainability? Groups like C40 claim that cities are responsible for the majority of the world’s carbon emissions, which is why they argue cities should be the ones to act first. Is urban living with economic growth compatible with a low-carbon lifestyle?
It’s absolutely compatible. The idea that we can defeat environmental problems while stopping economic development and growth is completely flawed. In the developed part of the world, we have had a basically complete de-coupling of all polluters, except the climate polluters, from economic growth. Norway has doubled their GDP in the last 20 to 30 years, while pollution is less.

As natural disasters increase in frequency, cities seem to be abandoning mitigation talk and focusing more and more on climate adaptation. Should mitigation still be just as important as adaptation?
It should be, and it is. The most amazing fact at the moment is that the price of solar, wind and other renewable energies can now compete with coal anywhere in the world, and in America there are five times more jobs in the solar than in the coal industry. China and India are shelving a huge number of planned coal plants, simply because they can go solar. Next month, Prime Minister Modi in India will be launching the global solar alliance, and President Macron of France will try and drastically reduce pollution in big cities to improve air quality. But it’s very good for climate at the same time. There’s no choice to be made between adaptation and mitigation. You need to do both.

I’m hearing less mitigation talk from cities, though, and more focus on adaptation.
I want to challenge that opinion. It’s exactly opposite of what’s happening in huge parts of the world — in China and India, close to 40 percent of humanity — so what’s happening there is of incredible importance. Look at the number of cities now moving into electrical mobility and bike sharing. In Norway, one-third of all cars sold are electrical, 50 percent of all cars are electrical plus hybrid. Europe is moving into restricting private cars, like Mayor Anne Hidalgo in Paris. Ten years back in Paris, there were motorways along the Seine.

There’s a huge move, maybe as much driven by the ambition to make cities green and livable as by climate issues, but that’s fine. China is drastically reducing coal, which, again, I think is more motivated by livable cities and less pollution than it’s about climate, but the result is the same.

Do you have a vision for what cities will look like when they’ve abandoned this kind of fossil-fuel infrastructure? There are two gas stations in sight of each other along the commercial corridor closest to where I live in Seattle, and everyday I walk by wondering if they will still be there in 10 years.
I’m fairly sure they will not be there, because you see a drastic and rapid movement towards electrical vehicles. All car makers in the entire world, whether it’s General Motors, Ford, Volkswagen, Toyota, or the Chinese, they’re all making electrical vehicles. At the end of the day, it will be government action and city action that defines how fast the transformation comes, because you need charging stations, market regulations, and price incentives. But I think it will come very fast, just that some cities will do it first and then when that happens, all will follow.

Sometimes of those moves leave people behind, though. The Port of Seattle is facing a walkout because truck drivers — largely immigrants earning near minimum wage — view tighter emissions regulations that require more recent engines as a cost burden that’s putting them out of business.
More often than not, this is a completely false idea. Electrical mobility is, throughout the lifespan of the car, cheaper, and in the future it will be much, much cheaper.

But we pay for this technology upfront at a higher cost.
Upfront costs may sometimes be higher, and that may sometimes be a big issue for low-income people, but that’s just a matter of organizing the financial market so that you pay over time.

There will always be resistance to change — that’s been throughout history. Nokia went from the biggest phone maker to the tenth biggest in a year and a half because they didn’t believe in smartphones. Those that try to oppose this change, they’re going to lose. If people in some parts of the U.S. oppose the change, the market will go to China, India, or to other parts of the U.S. You need to embrace change, but change in such a way that it will take care of low-income people.