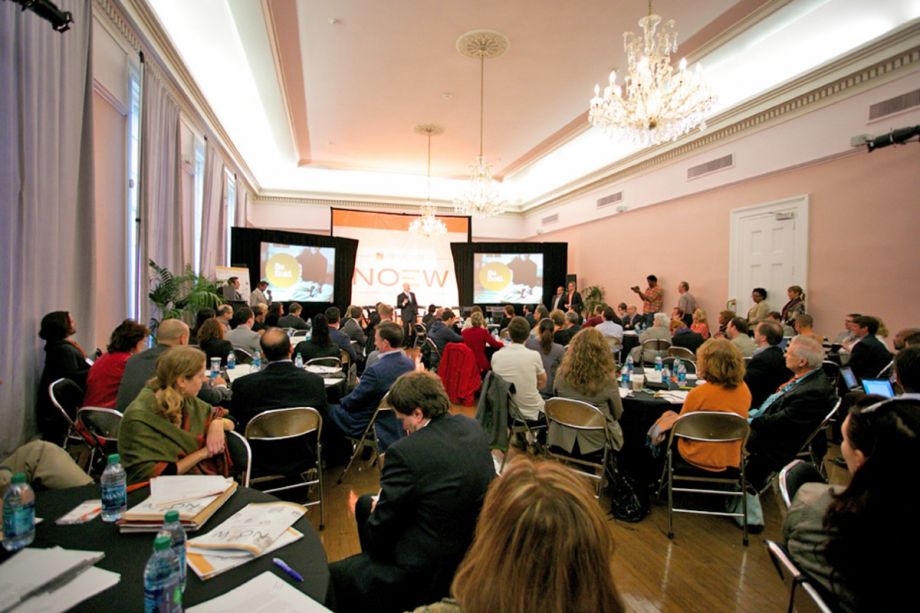 Participants in this year’s Idea Village in New Orleans.

The business media have been abuzz about post-Katrina entrepreneurship. Tax credits, low start-up and operating costs, a sense of excitement amidst the renewal, and the enviable culture of New Orleans itself have all helped attract a gaggle of business-minded transplants to the city, where they’ve found the enthusiastic support of entities that predated the levee failures — entities like Idea Village, whose wildly popular annual Entrepreneur Week conference is the capstone for increasingly busy Entrepreneur Seasons and includes the largest crowdsourced investor pitch in the nation.

The Greater New Orleans Community Data Center (GNOCDC) reported that there were 501 business startups per 100,000 adults in New Orleans in the three-year period ending in 2012. That rate exceeds the nation’s by a whopping 56 percent. Every major business publication has covered this phenomenon — a recent Atlantic story that posited New Orleans as the next great innovation hub was subtitled: “The Big Easy doesn’t want fewer bachelor parties. It just wants more bachelor’s degrees.”

“For decades, the city had been in a constant state of decline,” Adriana Lopez wrote in a characteristic article in Forbes in 2012. “However, Katrina’s devastation brought on new life for New Orleans. It brought attention to a city in need, restored love and appreciation to those who had taken advantage of it, and gave new opportunities to those individuals who were introduced to the city for the first time.”

Hype is a key component for any entrepreneurial venture, and it’s been supplied in droves for New Orleans. (It’s telling to note that, at the time she wrote the article, Lopez also ran a public relations firm, Gen Nola, whose clients included a number of hip new startups.) The notion of a formerly insular city rising from the ashes to be reborn as the country’s next great Creative Class success story is too appealing for the media to resist. A running theme in these articles is that that Katrina’s devastation had the welcome side effect of opening up space for new developments. And the city responded in kind — in 2011, the New Orleans Downtown Development District unveiled a promotional campaign that included light-pole banners emblazoned with the slogan: “Welcome to your blank canvas.” Echoing this sentiment, NPR filed a report in 2012 that began, “New Orleans became a blank slate after Hurricane Katrina struck in 2005. And ever since, entrepreneurs have rushed in to experiment with new ideas for building and running a city.”

The NPR piece outraged a number of New Orleans residents for its perceived boosterism of transplants essentially building a profitable playground atop the pain, death, and devastation of tens of thousands of indigenous residents. The concept of a “blank slate,” in fact, is a key component in what Naomi Klein calls “disaster capitalism,” a process repeated throughout the 20th and 21st centuries in which business interests — in collusion with government — exploit crises for their own financial gain and to the detriment of those still reeling from trauma and shock. She targeted the privatization of New Orleans’ school system and other elements of the post-Katrina recovery in her 2007 book The Shock Doctrine: The Rise of Disaster Capitalism.

This is not at all to say that each post-Katrina entrepreneur is a disaster capitalist — mom-and-pop businesses have long served as the city’s economic foundation. And entrepreneurship can strengthen a city’s core by building wealth and creating jobs. But scrutiny of the “New Orleans as entrepreneur wonderland” narrative reveals the limited scope of this phenomenon’s benefits.

In his article “Making Progress: Disaster Narratives and the Art of Optimism in Modern America,” Kevin Rozario points out that civic leaders have historically crafted encouraging narratives to psychologically pull people through the rebuilding process. But the truth behind such narratives is often fraught with inequity. “Throwing words at the chaos, spreading a narrative grid over the bewildering mayhem, was thus a therapeutic act, helping victims to cope with trauma by reassuring them that any devastation was certain to be fleeting,” he writes about the aftermath of the 1906 San Francisco earthquake. “This steadied many survivors to meet the material challenges that lay ahead, though most disaster narratives were also plainly ideological, serving a narrowly bourgeois vision of order, encouraging forms of physical reconstruction that plainly discriminated against the poor, immigrants, and nonwhites.”

The post-Katrina entrepreneurship narrative fits succinctly into the schema Rozario lays out. Despite New Orleans’ recent rankings by Forbes, Under 30 CEO, Inc. and many other magazines as a top start-up hot spot, most New Orleanians aren’t reaping the benefits. The city’s largest demographic, African-Americans, who make up roughly 60 percent of the population, is by many metrics faring worse than before the storm. According to the GNOCDC, employment among working-age black males is 53 percent, a two-percent decrease from pre-storm levels. The income disparity between black and white people — staggering before the storm — has since grown at a rate that exceeds the national average. This isn’t purely due to the economic crisis — overall employment in the New Orleans metro region grew by one percent between 2008 and 2012, outpacing the national average. But as lucrative construction jobs tied to rebuilding have petered out, many of the new jobs replacing them are in the service-oriented tourism industry, and wages actually declined one percent from 2006 to 2011 to an annual average of $47,295, six percent lower than the U.S. average.

One variety of entrepreneur that has emerged in the post-Katrina milieu, however, seeks to make his or her business an engine that addresses such social ills. “Social entrepreneurs” have grown dramatically in number in recent years, says Andrea Chen, executive director of Propeller, a “social innovation incubator” that pairs do-gooder entrepreneurs with seasoned business mentors who help the budding organizations monetize their efforts. The Justice and Accountability Center of Louisiana, a graduate of the Propeller incubator, for instance, hosts regular clinics throughout the city that help expunge people’s criminal records, enabling them to pass pre-employment background checks. Other Propeller alumni include businesses working with the New Orleans Redevelopment Authority to repurpose vacant and abandoned properties — there are an estimated 37,000 blighted properties in New Orleans — while others target issues related to public health, social security benefits access, education and more.

Although Propeller and its progeny work to benefit victims of injustice and inequity, it won’t be helping many of them start their own businesses. Access even to the socially conscious realm of the entrepreneurial sphere is a significant issue, says Chen. Forty percent of the ventures Propeller has launched have founders or co-founders of color, and more than 50 percent have low-to-moderate incomes. But she added that a majority of Propeller founders have at least a bachelor’s degree — which, as the Atlantic subtitle cheekily suggested, is a rare thing to have in New Orleans. Despite the influx of highly educated transplants post-Katrina, only 26 percent of the metro population 25 years and older had a bachelor’s degree as of 2011, compared with 29 percent nationwide, a gap that has been widening for a decade. This limits the number of people who can occupy the storied echelons of New Orleans entrepreneurship.

The Good Work Network also traffics in entrepreneurship in New Orleans, but despite the media blitz about the post-Katrina entrepreneurial spirit, its executive director, Phyllis Cassidy, says she hasn’t seen an increase in activity since the storm. The Good Work Network supports burgeoning women and minority small-business owners, and the world of “Silicone Bayou” tech startups, crowd-sourced investor pitches and leveraged buyouts doesn’t always overlap with the world in which her clients work. Cassidy says her entrepreneurs deal mostly in street-level businesses that serve their communities and, ideally, provide a comfortable living and money to pass down to children — a solid middle-class existence, in other words (and, for some, a path out of poverty).

Small businesses have historically comprised a vast majority of the New Orleans economy, and although business ownership has always been racially lopsided, especially in a city where “minorities” are actually the majority, there has existed a robust community of black business owners since Reconstruction.

“The African-American community has always been adaptable — they didn’t have a choice. Either work for the Man or start your own business,” says Cassidy.

The flexible nature of small businesses and their outsized proportion in New Orleans played a significant role in the city’s long slog toward normalcy after Katrina. In the early months, tree service operations resumed work, gas stations opened and shopkeepers whose properties were not beyond reasonable repair resumed business and were sights for sore eyes. Cassidy says she remembers covertly bemoaning what she considered an excessive number of cosmetologists eliciting Good Work’s help to open beauty salons before Katrina. But these operations were among the first to open up in the storm’s aftermath, providing crucial communal gathering points for people eager to regroup — not to mention the chance for women to obtain a bit of beauty for themselves in the midst of so much ugliness.

“I had to eat my words,” says Cassidy.

Despite New Orleans’ vast panoply of small businesses and their adeptness at bouncing back, the city’s economy will remain a liability in terms of resilience unless wealth becomes more evenly distributed, something that an entrepreneur boom alone will not bring about. But Cassidy says she feels optimistic about the current city government’s stance toward income equity, and in particular its work with the New Orleans Business Alliance in developing a strategy for meaningful workforce development.

“People are beginning to understand that the wealth gap is unsustainable,” she says. “It has their attention now.”

A master plan created by the city and the business alliance, Prosperity NOLA, targets five industries in New Orleans that planners say have the best potential for growth, creation of quality jobs and the ability to increase New Orleans’ competitiveness. While some industries, such as transportation trade and logistics, have been influential here for decades, others are new and are — or could be — tied to entrepreneurial activity, such as bio-innovation and creative digital media. The plan includes steps to implement job training that’s accessible to New Orleans’ poorer residents, and Cassidy says she senses a real willingness among corporations to partner with and hire minority businesses, chipping away at the segregation that has long plagued New Orleans’ business community.

But she adds that it’s not improved race relations as much as necessity that’s spurring this shift.

“It’s not a moral imperative,” she says. “New Orleans has the potential for growth, and the business community understands that, unless something is done, we’re not going to have a trained workforce to staff these industries.”