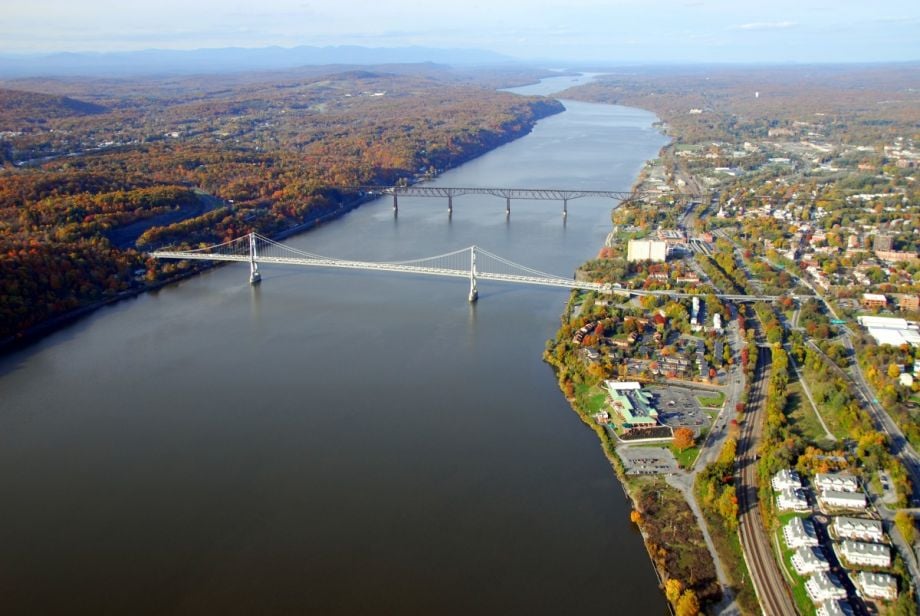 Seventy miles up the Hudson from the young but iconic New York City High Line, whose final phase with river views opened last month, Walkway Over the Hudson State Historic Park celebrated its fifth anniversary on October 3rd. The pedestrian bridge cost five times less than its well-heeled Manhattan cousin. It connects the city of Poughkeepsie to the town of Lloyd from a vantage point 212 feet above the water’s surface.

Poughkeepsie, the Dutchess County seat, is a city of 30,000 (when the neighboring Town of Poughkeepsie is factored in, the population crests 70,000) with a struggling economy. In June, the U.S. Conference of Mayors reported that the Poughkeepsie-Newburgh region’s gross metropolitan product performed the worst economically out of 100 metros nationwide in 2013. IBM, still the area’s largest employer, has been cutting jobs since the early 1990s.

Like many Hudson Valley towns and cities, Poughkeepsie flourished in the 19th century thanks to a combination of railroad and water access. It boomed with enough industry for business leaders to envision a rail link over the Hudson River, connecting the northeast to the Midwest. In 1889, the Poughkeepsie railroad bridge opened, carrying 3,500 railcars daily at its peak.

After fire struck in 1974, “the most common opinion was tear it down because it serves no purpose,” says Elizabeth Waldstein-Hart, executive director of Walkway Over the Hudson, a friends group that conceived the park in the 1990s. “It was a hulking, rusting iron structure that had been derelict for three decades.”

But history lessons die hard, and “a lot of people remembered or knew from their grandparents that when it opened, it was an engineering marvel, the longest elevated railroad bridge in the world,” Waldstein-Hart says.

The non-profit organization led tours to show residents and leaders the breathtaking scenic views of the Hudson Valley and Catskill Mountains. The tipping points, however, came from outside help: first a grant to study the cost of removal versus repair, then an engineering study sponsored by the Dyson Foundation. With hard numbers — restoration ultimately cost $38.8 million — advocates could make a convincing case.

Serendipitously, their efforts coincided with the New York State quadricentennial. The Walkway project won state money, creating a hard deadline in order to celebrate Henry Hudson’s 1609 journey upriver. “It happened on time and on budget,” Waldstein-Hart says with pride, and was subsequently turned over to the New York State park system for operation.

Its local impact has been significant. “The Walkway was an angel sent from heaven to assist in the renaissance of the city of Poughkeepsie,” affirms Charles North, president and CEO of the Dutchess County Regional Chamber of Commerce. Consultants hired by the Walkway organization estimated an annual direct spending economic impact of $14.6 million from 267,700 users. In year one, the bridge tripled that with 780,000 visitors and now regularly pulls 500,000 annually, with half coming from outside the region, including every state and 48 countries. Walkway Over the Hudson is currently collaborating with SUNY-New Paltz, a nearby university, to update the economic impact study.

Although the park’s Poughkeepsie doorstep is currently a gravel parking lot — something that will change as capital improvements are implemented — the Walkway benefits from its close proximity to public transportation. Poughkeepsie is the terminus for Metro-North Railroad’s Hudson Line from Grand Central Station and also an Amtrak stop. Jeff Anzevino, director of land use advocacy for Scenic Hudson, a regional land trust that supported the park’s development, calls this convenience “hugely important.” He says, “Many people do not drive or do not own cars. That doesn’t mean they shouldn’t have access to nature.”

The bridge is only a 15-minute walk from the train station, an uphill journey abetted by a $2.8-million elevator that opened in August, making the park ADA-compliant. Even as daytrippers throng from New York City, locally, “Walkway has made walking cool again,” says Anzevino, who lives near the park’s western entrance and commutes daily over the bridge. “I see lots of teenagers every day out walking the park after school.”

The public health impact, something that the Walkway group hopes to study alongside economic impact, has also been positive. “People tell us stories about losing weight or seniors that walk for heart health. On bad weather days, we get calls constantly asking if the bridge is open because so-and-so is trying to make it 300 days this year,” Waldstein-Hart says.

Meanwhile, as more New York City residents are priced out of the five boroughs, Poughkeepsie’s walkable scale, viable Main Street, easy transit access and historic housing stock suddenly have newfound cachet. “Poughkeepsie has lots of potential and the values of properties are such that investment becomes interesting,” says Steven Tinkelman, an architect and developer who has adaptively reused a former riverfront factory and old fire station as apartment buildings.

The Hudson itself is somewhat cut off from the central business district by the train, which skirts the water’s edge, a legacy of railroad baron Cornelius Vanderbilt, whose estate is a National Historic Site just a few miles north of the Walkway. But with the crowds flocking to the park, the city council was prodded by Walkway, the Chamber of Commerce and Scenic Hudson to rezone the area from industrial to mixed-use, paving the way for better river access and more development all spurred by a pedestrian bridge. The experience is a stark contrast to Main Mall, a 1973 attempt to save Poughkeepsie’s commercial corridor by making it pedestrian only. It failed and Main Street was reopened to car traffic in 2001, with the last decade seeing steady investment in the old commercial building stock.

Now Walkway Over the Hudson is fielding calls from across the country about how to turn old bridges into parks as the U.S.’s industrial infrastructure ages beyond its shelf life. Advocates for bridges in Chattanooga, Missouri, Iowa and Minnesota have reached out, alongside others in New York State, including, possibly, the Tappan Zee Bridge downriver. Length and pitch — the Walkway is a manageable 1.28 miles and flat — play a big role, meaning not every bridge is a good candidate. But as cities worldwide race to copy the High Line, the Walkway is a reminder that even without Manhattan’s population density, all it takes is a good view and a nice day to get people to lace up their walking shoes.