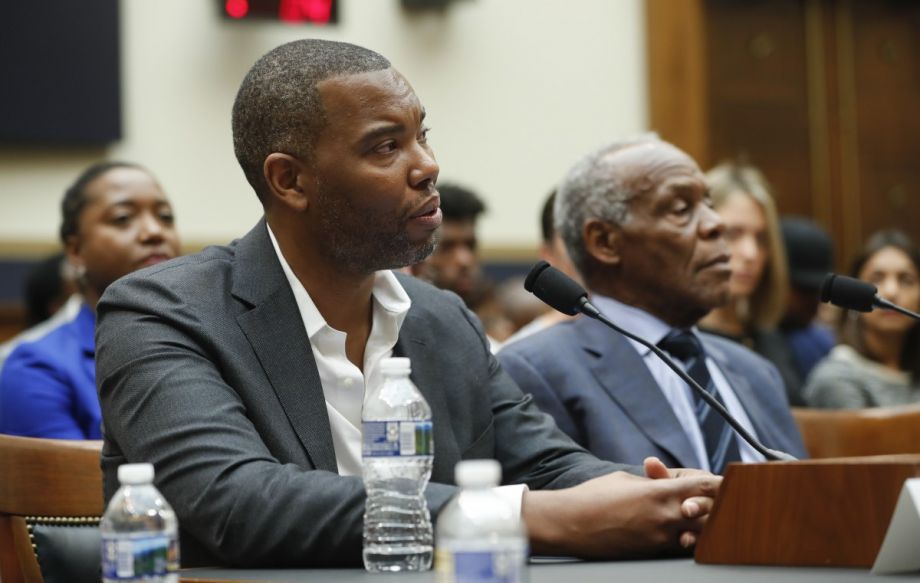 Author Ta-Nehisi Coates, left, and actor Danny Glover, right, testify about reparation for the descendants of slaves during a hearing before the House Judiciary Subcommittee on the Constitution, Civil Rights and Civil Liberties, at the Capitol in Washington, Wednesday, June 19, 2019. (AP Photo/Pablo Martinez Monsivais)

The House Meets to Discuss Reparations — What That Means for the U.S. & Who Could Foot the Bill

On Wednesday, members of the House Judiciary Subcommittee on the Constitution, Civil Rights, and Civil Liberties, met to discuss a bill endorsing research of slavery reparations. Witness testimonies included writer Ta-Nehisi Coates, who gained national attention after writing “The Case for Reparations” for The Atlantic.

The bill, Commission to Study and Develop Reparation Proposals for African Americans Act, would give $12 million to a 13 member commision dedicated to studying the effects of slavery and make recomendations to Congress.

So what would reparations look like today? According to CNN, estimations of the labor of enslaved persons have ranged from $6 trillion to $97 trillion in today’s dollars. Experts have approximated that reparations could cost up to $5 trillion. The payout would be given to African Americans — the descendants of enslaved persons.

It wouldn’t be as simple as writing a check. Proposed forms of reparations focus on government assistance. Zero-interest loans for black homeowners, free college tuition, and community development plans are up for consideration, reports the New York Times. Governments, private companies, and wealthy rich families — heavily concentrated in the South — benefitting from forced labor have been targeted as a source of the money.

When asked about reparations on Tuesday, Senate Majority Leader Mitch McConnell said, “I don’t think reparations for something that happened 150 years ago, for whom none of us currently living are responsible, is a good idea.”

At Wednesday’s House hearing, Coates fired back, saying, “This rebuttal proffers a strange theory of governance that American accounts are somehow bound by the lifetime of its generations. But well into this century the United States was still paying out pensions to the heirs of Civil War soldiers.”

Opportunity Zones are meant to foster economic development in low-income areas, so how’d existing investments in a wealthy neighborhood qualify? ProPublica reports that Under Armour CEO and billionaire Kevin Plank and Goldman Sachs stand to gain millions in tax breaks in the Port Covington development.

Port Covington is a former railroad terminal in Baltimore, but in the same census tract as a wealthy neighborhood with a median income of nearly 160 percent of the state of Maryland. Port Covington is also the site for a new redevelopment project. Plank has already invested over $100 million in acquiring property and plans to refurbish the area with Sagamore Development, his real estate firm, reports the Baltimore Sun. The redevelopment, scheduled to take place over the next 20 years, will include office spaces, shopping, parks and, of course, a brand new Under Armour campus.

According to the Sun, the Port Covington census tract was not originally an opportunity zone. But the Port Covington development team — which had donated over $24,000 to Governor Hogan’s election campaigns — met with the governor’s aides to ask to be reconsidered. Three weeks later, when 168 new tracts were released on the Treasury’s revised list, the neighborhood made the cut.

What ProPublica (and the experts it interviewed) calls a mapping error led the Treasury Department to conclude that Port Covington happens to share a parking lot with the Carroll-Camden Industrial Area, a designated opportunity zone. The small but shared land qualified the neighborhood as a low-income community.

Plank, who controls 40 percent of the land in the Port Covington opportunity zone, is a potential investor in the project. A Port Covington spokesperson, ProPublica said, denied that Plank’s family members are investors.

In New Orleans, Woman Rents Illegal Airbnb on Her Block to Prove It Was Operating Illegally

New Orleans legalized certain types of short-term rentals in 2016. There are a few important restrictions: The person offering a home for rent — the owner-resident, subletter, or investor — must have a permit, and most homes can only be rented for up to 90 days a year. Hot neighborhoods like the French Quarter can’t be used for short-term rentals at all.

But some say the regulations aren’t doing enough to curb the purchasing of homes by investors to offer as short-term rentals, driving up prices for residents. In 2017, housing nonprofit director Breonne DeDecker told Next City that a 90-day cap on rentals would still be more profitable to an investor as a short-term rental, because that unit could still be rented most weekends. And the current rules don’t limit how many short-term rentals can exist on one block or how many properties one owner can operate.

Recently, one fed-up woman took enforcement into her own hands, reports The Lens. After repeatedly contacting city officials about the fourth illegally operating rental on her block with no response, she rented the house herself. Only then, The Lens says, did the city schedule a violation hearing.

One reason why short-term rental enforcement has been so difficult in New Orleans is that platforms such as HomeAway and Airbnb “aren’t cooperating with the city,” The Lens said.

“The platforms have gone to great lengths to avoid meeting their end of the bargain,” said a February memo from the Department of Safety of Permits, obtained by The Lens. “Their actions may be legitimately characterized as deliberate data obfuscation, refusal to provide required data, and a total failure of cooperation with any enforcement mechanisms pursued by the City against platform users who violate the law.”

New Orleans City Council is close to passing a law that would tighten restrictions on short-term home rentals.