Economics in Brief: Trump Cuts Food Stamps for Hundreds of Thousands – Next City 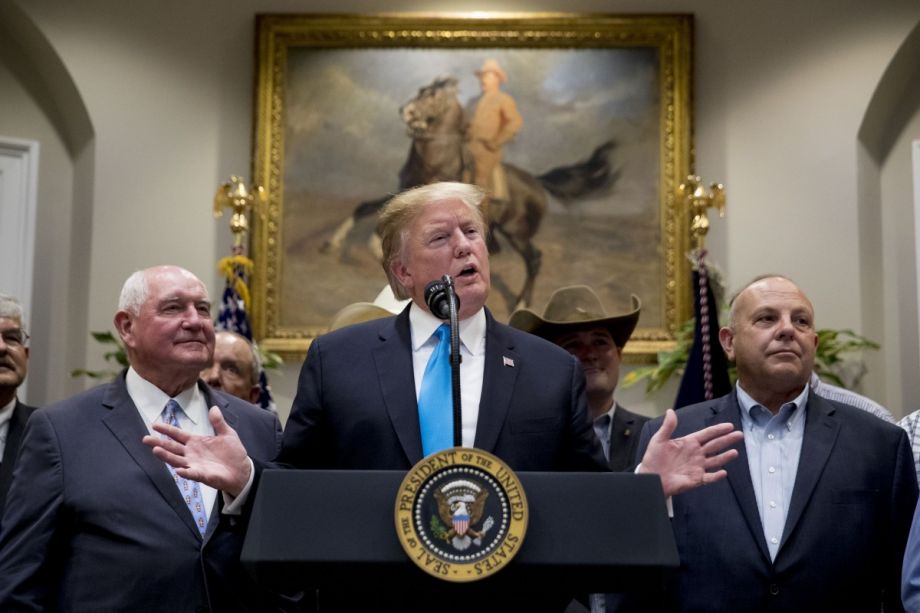 President Donald Trump, accompanied by Agriculture Secretary Sonny Perdue, left, speaks during a meeting to support America's farmers and ranchers in the Roosevelt Room of the White House, Thursday, May 23, 2019, in Washington. (AP Photo/Andrew Harnik)

The Trump administration has finalized a rule that will make it harder for Americans to access the Supplemental Nutrition Access Program (SNAP), commonly known as food stamps, a move that is projected to kick 700,000 people off the rolls, Reuters reports.

Already federal rules require that adults 18-49 without dependents or a disability can only receive food stamps for three months in a 36-month period, unless they are working at least 20 hours a week or enrolled in work training. States apply for waivers for the time limit if economic conditions make it harder for people to find jobs.

The changes tighten the guidelines for when states can request such waivers, Reuters reports. “States are seeking waivers for wide swaths of their population, and millions of people who could work are continuing to receive SNAP benefits,” U.S. Agriculture Secretary Sonny Perdue told reporters.

The rule requires that states ask for waivers for only “small labor market areas,” usually one or two counties grouped together, whereas previously states could use their judgment whether a low-unemployment county next to a high-unemployment county could also qualify for a waiver. The rule also requires that for an area to qualify for a waiver, it must have an average unemployment rate over a 24-month-period of at least 6 percent and 20 percent higher than the national average. That means, according to CityLab, that people living through a sharp economic downturn might not become eligible for SNAP until months after the fact.

And if a nationwide recession hits, writes Robert Greenstein, president for the Center on Budget and Policy Priorities, “Far fewer areas will qualify for waivers … A state with spiking unemployment reaching levels as high as 9 percent would not qualify for a waiver if national unemployment were also high, such as at 8 percent. This will limit a core strength of SNAP—its responsiveness to changes in economic conditions so that individuals who lose their source of income can quickly qualify for temporary food assistance.”

Duolingo Is the First Pittsburgh-Based Tech Startup Valued At $1B+

Duolingo has raised $30 million in a Series F funding round from Google’s parent company Alphabet and become the first Pittsburgh-based tech startup valued at more than $1 billion by venture capital investors, CNBC reports.

The language-learning app is now valued at $1.5 billion, the site reported.

The Bay Area accounts for about half of all venture capital investment, according to 2017 data, with New York, Boston, and Washington, D.C., taking another third. In terms of individual cities with a large share of VC funding, Pittsburgh doesn’t crack the top ten. For a Pittsburgh-based firm to become a “unicorn” speaks to the city’s growing startup scene. Indeed, the most recent data from Pitchbook-NVCA Venture Monitor shows that cities outside of the top ten metros were responsible for about 35 percent of venture capital deals in 2019 so far, a slight increase over the past few years. Bay Area companies accounted for slightly fewer deals than usual. (The data reflected the number of deals overall and did not examine whether certain metro areas were receiving, on average, larger investments than others.)

Duolingo is not the only highly valued Pittsburgh startup. The self-driving technology company Argo is valued at $7.25 billion but got its funding through direct investments from Ford and Volkswagen rather than through venture capital firms.

Opportunity Zones have been criticized for their lack of guardrails around projects that have the potential to displace residents who live within their boundaries. But at least one social impact investor sees the promise in Opportunity Zones nonetheless.

Martin Muoto, founder and managing partner of SoLA Impact, is planning to raise $50 to $75 million for an Opportunity Zone project in Los Angeles called the Beehive, the nation’s first business campus for opportunity zone companies, reports Black Enterprise. The Beehive will be a four-acre campus with office space for minority and women-owned businesses inside an Opportunity Zone.

“Our primary focus has always been ensuring that the community shares in the wealth created by the OZ legislation, and the Beehive is just one — but an important part — of that,” Muoto told Black Enterprise. “In order to create wealth, you have to catalyze economic development, entrepreneurship, innovation, and job creation. We believe the Beehive will create hundreds of quality jobs by attracting companies that want to invest in South LA.”

Muoto adds: “The Opportunity Zone legislation is a once-in-a-generation opportunity that can potentially create real wealth for black entrepreneurs and the black community. We — as minority entrepreneurs — need to be leading and setting the agenda in our communities for what types of businesses, what types of business models, and what products and services can be provided.”