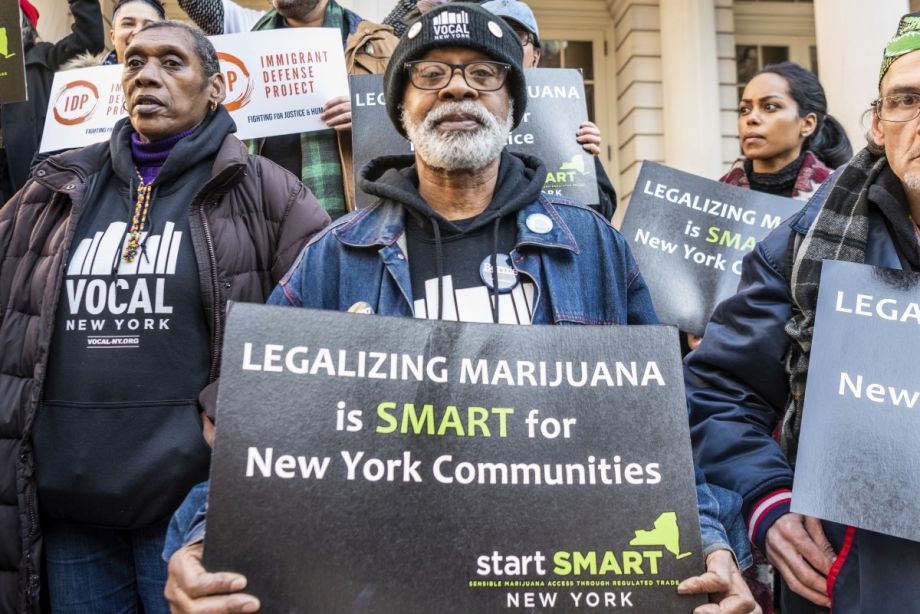 Supporters of legal marijuana rally on the steps of New York City Hall on November 21, 2019.  (Photo by Gabriele Holtermann-Gorden/Sipa USA)(Sipa via AP Images)

New York Gov. Andrew Cuomo has signed into law a bill legalizing marijuana in the Empire State. The law takes effect immediately, though it will be a while before legal dispensaries and “consumption sites” will begin operating.

People convicted of marijuana-related offenses that are no longer crimes under the new legislation will have their records automatically expunged, the New York Times reported, but did not give details on the timeline for when or how that will take place. (Code for America has helped California counties clear 140,000 marijuana convictions since the drug became legal in that state, as Next City has previously reported.)

The marijuana legalization bill also comes with a provision that 40% of tax revenue from licensed pot sales will be directed towards Black and Latino communities which have disproportionately borne the brunt of the “war on drugs.”

“Unlike any other state in America, this legislation is intentional about equity,” Crystal D. Peoples-Stokes, the Assembly’s Democratic majority leader and sponsor of the bill, said, according to the Times. “Equity is not a second thought, it’s the first one, and it needs to be, because the people who paid the price for this war on drugs have lost so much.”

New Mexico legislators also voted to legalize marijuana in the state; the governor is expected to sign, the New York Times reported in a separate story.

In September 2020, Santa Clara County launched a basic-income pilot giving foster youth who aged out of the system $1000 a month. Now, Dave Cortese, the county supervisor who launched the pilot, is a California state senator, and he has introduced a state bill to expand the program statewide, the Huffington Post reports.

Once foster youth age out of the system, Cortese told Huffington Post, they are left with little emotional or financial support. They can’t pick up the phone and ask: “‘Hey Mom, I’m having trouble making it, can you help me pay my rent for a month?’ They just genuinely don’t have that.”

It will be a while before county officials have detailed data on the success of the pilot, but anecdotal evidence suggests that it’s helped many youth get into stable housing. For some youth, it’s their only source of income.

Women-Owned Businesses (Slowly) on the Rise

The number of businesses owned by women in the U.S. increased by 0.6% from 2017 to 2018, according to new data from the Census Bureau.