Economics in Brief: Momentum Grows for a Minimum Wage Increase – Next City

Economics in Brief: Momentum Grows for a Minimum Wage Increase 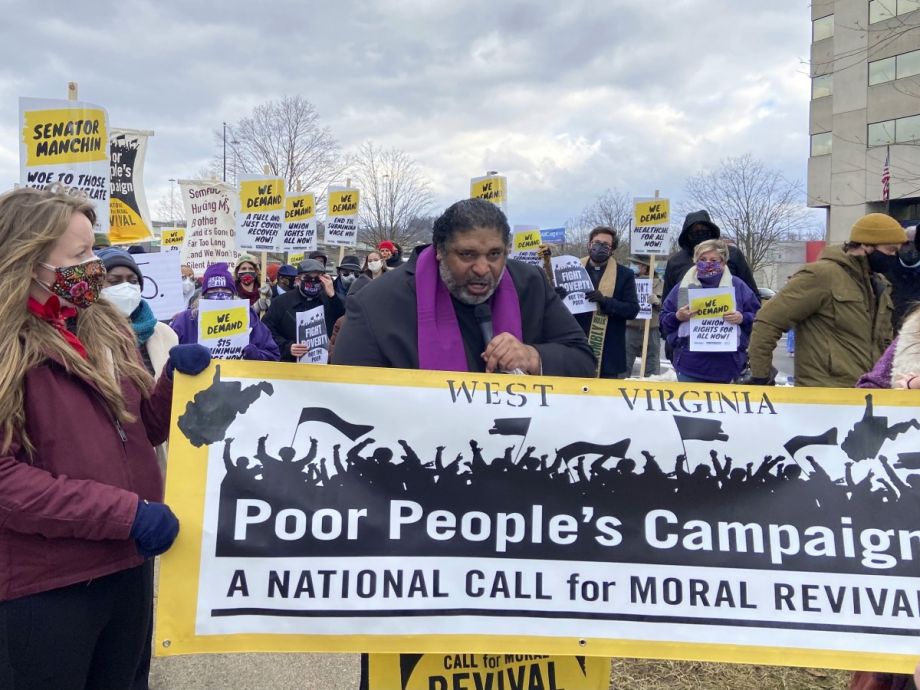 In this February 22, 2021 photo, Rev. Dr. William J. Barber II, co-chair of the Poor People's Campaign, leads a rally in Charleston, West Virginia, outside of Democratic U.S. Sen. Joe Manchin's office, to support raising the federal minimum wage to $15 per hour. Manchin has previously said he supports a more modest increase of the current minimum wage from $7.25 to $11. (AP Photo/Cuneyt Dil)

Costco had already raised its starting hourly wage to $14 in 2018 and $15 in 2019. The company says 20 percent of its employees currently earn its minimum wage, according to CNN.

Meanwhile in Washington, D.C., the Biden-Harris administration has been pushing to boost the federal minimum wage to $15 an hour as part of the next COVID-19 relief and recovery package. Some Democratic representatives in Congress are weighing a $12 minimum hourly wage as a compromise. On the other side of the aisle, Republican Senator John Thune of South Dakota opposes a $15 minimum hourly wage, saying he earned $6 an hour as a kid — which would be $23 an hour in today’s dollars, accounting for inflation.

CNN reports today that the U.S. Senate appears to have ruled out a minimum wage increase as part of the relief package, at least for now.

Most business groups continue to oppose raising the federal minimum wage, arguing that it would hamper the ability to start and grow new small businesses especially now when those jobs would help recover from the pandemic — despite the fact that the most likely minimum wage proposals all ramp up to $15 over the course of the next few years.

One business group, Business for a Fair Minimum Wage, has been growing its members who support a $15 minimum wage. This week the group released a new report making the case for why a $15 minimum would be good for business.

The report quotes several business owners, including Ashraf Hijaz, owner of Beauty & Beyond, based in Montgomery, Alabama, who said: “Lawmakers aren’t doing businesses any favors by keeping the minimum wage at $7.25 and keeping more money out of the hands of our customers.”

New research and reporting are starting to reveal how Opportunity Zone tax incentives, created under the 2017 Tax Cuts and Jobs Act, have provided multiple opportunities for politically-connected insiders to ensure the tax break would financially benefit themselves or their allies.

A quick recap. The original 2017 legislation gave Governors the opportunity to designate eligible census tracts as Opportunity Zones. More than 42,000 census tracts were eligible across the country because they had a poverty rate of at least 20 percent or median family income of up to 80 percent of the area median income — or because they were adjacent to a census tract with one of those two characteristics. Governors could select up to 25 percent of eligible census tracts in their states (or territories), and they had until May 2018 to submit those designations to the U.S. Treasury for final approval. Around 8,700 census tracts received Opportunity Zone designation by June 2018, and the legislation did not offer a process to revise those census tract selections after the fact.

The legislation also did not prescribe or recommend a process by which governors should designate those tracts. Earlier research showed evidence that states with a professional selection process of zones had no evidence of political favoritism while states with no formal process had a really large impact of political favoritism. That research came out after multiple investigations into allegations that political insiders influenced the designation process had already sparked a Congressional inquiry.

And now this week, Bloomberg reports that politically-connected developers have been successfully lobbying to expand the boundaries of previously designated Opportunity Zone census tracts so that their projects located outside original boundaries would become eligible to provide tax benefits for project investors:

“About 140 tracts grew in size by at least 5%, according to census data analyzed by Bloomberg News. Thirty-six expanded by 20% or more,” Bloomberg reported. “Interviews and documents show that some of these changes followed appeals by developers and their allies to the White House, senior Treasury Department officials and former Commerce Secretary Wilbur Ross, who oversaw the Census Bureau. Although there’s no indication that such talks broke any laws, the lobbying put pressure on the bureau to approve changes that some people involved in the once-a-decade revisions found inappropriate.” According to Bloomberg, one group that was successful in lobbying to expand Opportunity Zone census tract borders was the NHL’s Pittsburgh Penguins.

Chicago Thinks About Where Its Money Sleeps at Night

The big banks where the City of Chicago keeps most of its municipal deposits aren’t lending very much at all to Black, Latino or other communities of color. Chicago’s city council wants to change that.

It’s the first time in recent years there has been any city council debate in Chicago over the question of which banks hold city funds local public radio station WBEZ reports. The news comes after a year during which a pandemic disproportionately affected Black neighborhoods in Chicago, Black Lives Matter protests engulfed Chicago as they did in many other cities, and a June 2020 WBEZ report showed for every $1 banks loaned in Chicago’s white neighborhoods, they invested just 12 cents in the city’s Black neighborhoods and 13 cents in Latino neighborhoods, despite Chicago having an equal percentage of white, Black and Latino majority neighborhoods.

According to WBEZ, the city treasurer’s office says that at any given time, the Chicago municipal government holds $400 million to $500 million in bank accounts, and the city mostly uses large banks — including Chase, Fifth Third, BMO Harris and PNC Bank — to collect payments, pay its bills and conduct operations such as payroll.

Back in 2017, then-City Treasurer Kurt Summers announced that the city had moved $20 million of its deposits into Chicago’s last remaining Black-owned bank, Illinois Service Federal — which changed its name to GN Bank in 2018. It remains one of 13 banks currently seeking re-authorization to serve as municipal depositories for Chicago.

All of those deposits are just a fraction of the $9 billion investment portfolio that the city treasurer’s office manages on behalf of the city, which does not include the $7 billion in Chicago’s four public employee pension funds. Those are overseen by boards of trustees who decide how the funds get managed.

WBEZ reported that City Comptroller Reshma Soni said her office reached out to 54 banks to ask them to apply to hold the city’s deposits, but she told the public radio station that with federal interest rates at zero percent, “it’s not financially feasible for many smaller banking institutions to become a municipal depository at this time.”

Other cities have started to apply a racial justice lens to where they bank. In 2019, St. Louis City Treasurer required banks seeking authorization as city depositories to outline their plans to respond to Black Lives Matter economic demands. Philadelphia and San Francisco are just a few of the cities now weighing whether to charter new municipally-owned banks to hold at least some city deposits and leverage them to support homeownership or small business lending for Black, Latino, and other communities of color.

All the fuss in Chicago could be for naught. As WBEZ reports, if Chicago City Council doesn’t vote to approve the annual reauthorization, existing banks can continue to do business with the city.

As of this week, yeah, that’s over.