Economics in Brief: It’s Hard to Open a Grocery Store in a Food Desert – Next City

Economics in Brief: It’s Hard to Open a Grocery Store in a Food Desert 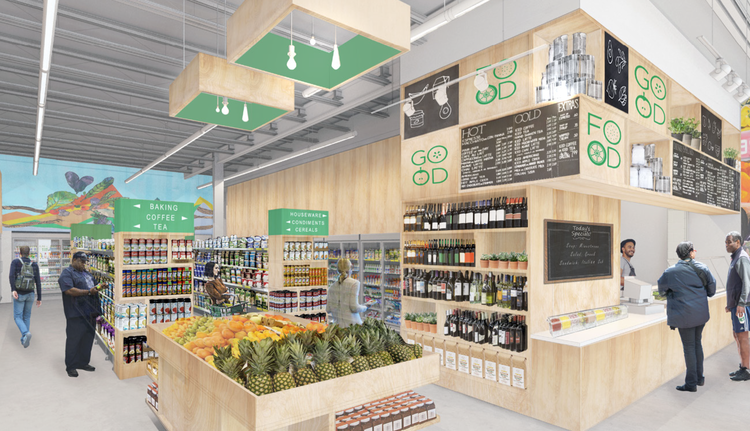 A nonprofit that aims to open grocery stores in low-income neighborhoods in the Washington, D.C. region has struggled to expand beyond its first store, the Washington Post reports.

One location of Good Food Markets that was scheduled to open in Seat Pleasant, MD., a D.C. suburb, two years ago has not yet opened; another in D.C.’s Ward 8 is a year behind schedule, and the first location, in D.C.’s northeast, is still not profitable after five years, the paper said.

The struggles point to how difficult it is to bring food to food deserts, even for mission-focused nonprofits like Good Food.

When Good Food’s first location opened in 2015 it was to “rave reviews,” the Post said, but the money the store had set aside to last six months to a year ran out in six weeks. It turned out, said Philip Sambol, who is the executive director of Good Food’s parent nonprofit, that running a grocery store was more complex than originally thought.

Sambol also told the Post that his organization, which continues to support the store, considers the store to be a social enterprise, and it doesn’t need to be profitable. But it does need funding to get off the ground. The good news for Good Food: alternate funding for the Seat Pleasant store has come through, and it should open in early 2021 — only three years behind schedule.

After months of lawsuits, the SBA has released data on every small business that received a Paycheck Protection Program or Economic Injury Disaster loan. NBC News, one of 11 newsrooms that sued for the data, found troubling patterns, the outlet reported Tuesday.

More than 25 PPP loans worth more than $3.65 million went to businesses renting from properties owned by the Trump Organization or the family of Jared Kushner, the president’s son-in-law. Those businesses then were required to put toward rent for the loans to be forgiven. The businesses were also expected to preserve jobs, but 15 of the 25 businesses reported that they preserved one or zero jobs — or did not report a number at all.

Separately, NBC found that more than 300 companies received more than $10 million in loans through subsidiaries, something that was supposed to have been prohibited. And more than 100 loans were given to companies with no business name.

The New York Times did its own analysis and found that 1 percent of the program’s borrowers — mainly large companies such as P.F. Chang’s, TGI Fridays, Ted’s Montana Grill and Legal Sea Foods — received 25 percent of the aid.

“It’s been clear for months that the Trump administration’s poor design and implementation of the Paycheck Protection Program left it open to rampant abuse and fraud. What the new data reveals is just how badly mom-and-pop businesses were excluded from the program so larger businesses could cash in,” said Kyle Herrig, president of government watchdog Accountable.US, in a press release.

Hundreds of small businesses are facing lawsuits over rent, The City reports. The city’s civil court system is clogged with these types of suits, which industry experts say were uncommon a year ago. (Also clogging the system: pre-emptive lawsuits by cash-strapped tenants against their landlords.)

The pandemic has destroyed many businesses that either couldn’t reopen (salons, restaurants) or couldn’t make sales (The City talked to one owner of a school-uniform company who is struggling). These owners say they simply can’t pay rent, even if they lose in court.

It’s hard to know how judges will rule on these suits; since the courts are so backed up, few rulings have been made. But typically judges rule in favor of landlords in commercial rent disputes.

Joycelyn Taylor, a candidate for mayor and the co-founder of the NYC MWBE Alliance, a nonprofit that helps minority- and women-owned businesses, told The City that many landlords have been willing to negotiate. (A small city program provides some low-income business owners free legal aid to help them negotiate.) That’s because they know that a court order demanding a business owner pay rent won’t change anything if that business owner has no money to pay.

She told The City that what landlords and tenants need is federal aid. “We need the federal government to step in,” she said.