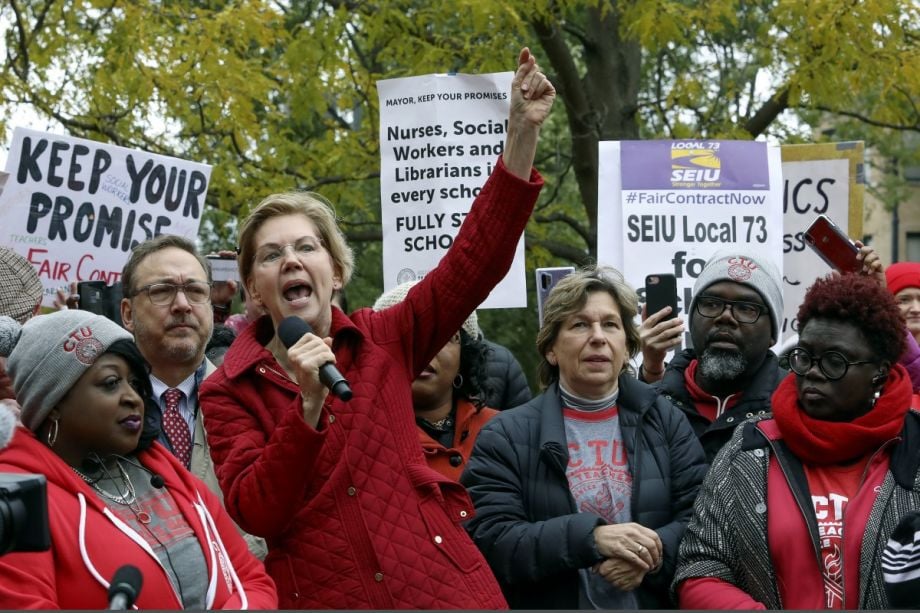 As the teachers’ strike in Chicago marches on (it’s predicted to continue into next week as teachers say their major priorities aren’t being addressed) they got some unexpected support from senator and presidential candidate Elizabeth Warren.

Block Club Chicago reports that Warren appeared for the fourth day of the strike, Tuesday, speaking with American Federation of Teachers President Randi Weingarten and promoting her K-12 education plan, which she released this week.

“The unions are how we have power. The unions are how we make sure that the needs of every one of our children are heard loud and clear,” Warren said at the event. “I’m here because the eyes of this nation are upon you. They have turned to Chicago for you to lead the way — for you to show how the power of standing together is the power of making real change in this country.”

JPMorgan Chase has committed $5 million to support affordable housing and small businesses along the corridor of the planned Purple Line light rail in Washington, D.C.,’s suburbs, the Washington Post reports.

It’s the largest grant so far for anti-gentrification work on this corridor, which will link wealthy Maryland suburbs with predominantly Latino communities at risk of displacement.

A map shows the eastern half of the rail line at moderate to high risk of gentrification. The map was created by the National Center for Smart Growth at the University of Maryland at College Park, which administers the Purple Line Corridor Coalition, a group that pushes for community development along the proposed line.

The investment is expected to create or preserve 1,000 homes and guarantee up to 200 small-business loans.

Women Are Underrepresented in Monetary Policy
The central banks where monetary policy is set employ an overwhelming number of men, and that’s a problem, the New York Times says. That’s partly because women economists have different opinions on monetary policy. In a separate article, the Times noted that a 2014 survey of professional economists found that:

Many women, speaking at a conference on gender equality at the European Central Bank this week, offered suggestions for why women might not be sticking around in economics: Papers by women are less likely to be accepted for publication, said Laura Hospido, an economist at the Bank of Spain. Women speakers are more likely to be interrupted as well as face hostile questioning when lecturing, according to a “secret shopper” research project conducted by Alicia Modestino, a Northeastern University professor. Economists in a secret online economics forum (truly, there’s a subculture for everything) used words to describe women that led one economist to describe the forum as “a cesspool of misogyny.”

Those reasons might explain why there are fewer women working at places such as the Federal Reserve. But what about the chairman- — or chairwomanship? The very top leadership of central banks are often political appointees; and politicians have “shown a strong bias,” the New York Times said, “in favor of men.”