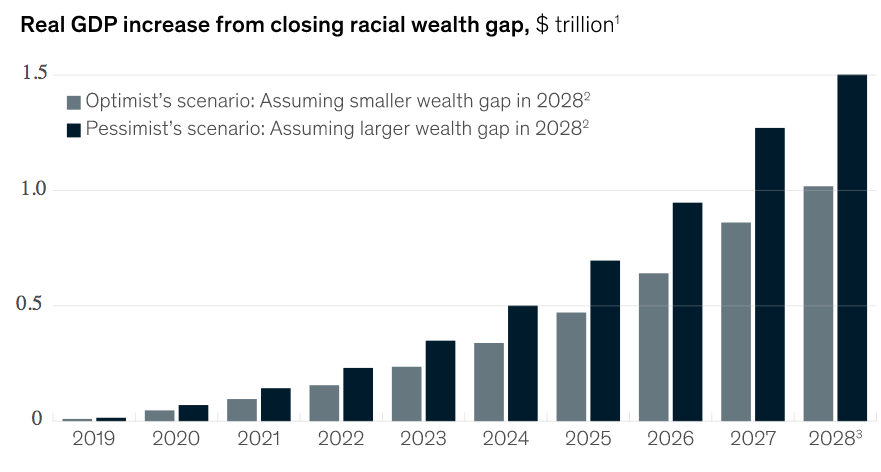 Closing the wealth gap could result in at least a trillion dollars of GDP by 2028, according to a new study. (Image via McKinsey)

The Impact of Closing the Racial Wealth Gap

A new study from McKinsey looks at what it would mean for the U.S. economy as a whole to close that gap. The consultants’ conclusion? Closing the racial wealth gap would boost U.S. GDP by 4 to 6 percent by 2028. That translates to at least a trillion dollars, McKinsey said.

Closing that gap won’t be easy. McKinsey points out that two-thirds of the U.S. black population is concentrated in 16 states, all of which score below the national average for quality of life, healthcare, infrastructure and other structural factors.

After the announcement of the new “public charge” rule by the Trump administration this week, immigrants around the country are already considering whether they should stop accepting public assistance in order to preserve their chances at receiving permanent legal status.

The New York Times quoted one 28-year-old woman from Colombia who is five months pregnant. She is in the States on a tourist visa while she applies for a green card with her citizen husband as a sponsor. She said that she enrolled in WIC benefits while her husband, a teacher, was off work for the summer, but now wishes she could stop. “Right now we need it,” she told the paper.

New York City is urging immigrants not to unenroll from anything just yet: the rule doesn’t go into effect until October and will certainly be challenged before then. But the onslaught has already started. “People are voluntarily giving up thousands of dollars worth of food when they’re desperately poor because [they think] the alternative is having a parent deported,” Joel Berg, CEO of Hunger Free America, told Gothamist.

“The ‘public charge’ rule is yet another attempt by the Trump administration to instill fear and concern among working immigrant families, but rest assured New Yorkers are fighters and the city will do everything in our power to ensure people have the resources they need to at this critical time,” Bitta Mostofi, commissioner of the Mayor’s Office of Immigrant Affairs, said in a statement obtained by Gothamist. “The city is here to help you make the right decision for you and your family.”

The We Company (aka WeWork, the startup that provides coworking and shared office spaces globally), has filed paperwork for an initial public offering. But Bloomberg is not convinced investors should jump in.

“WeWork is pushing ahead with an IPO despite an unclear path to profitability that could endanger its valuation,” Bloomberg Intelligence Analyst Jeffrey Langbaum told Bloomberg News. “We believe the company will be hard-pressed to reverse losses as long as it pursues significant revenue growth.”

Those losses? Are significant. The company lost $690 million in the first half of 2019. Over the past three years, the losses totaled $2.9 billion.

The We Company plans to raise $6 billion in debt alongside the IPO, which is targeted to be around $3.5 billion, Bloomberg said. That would make it the second-biggest IPO of the year, behind Uber.