Economics in Brief: Cities Getting Creative With Census Campaigns – Next City

Economics in Brief: Cities Getting Creative With Census Campaigns 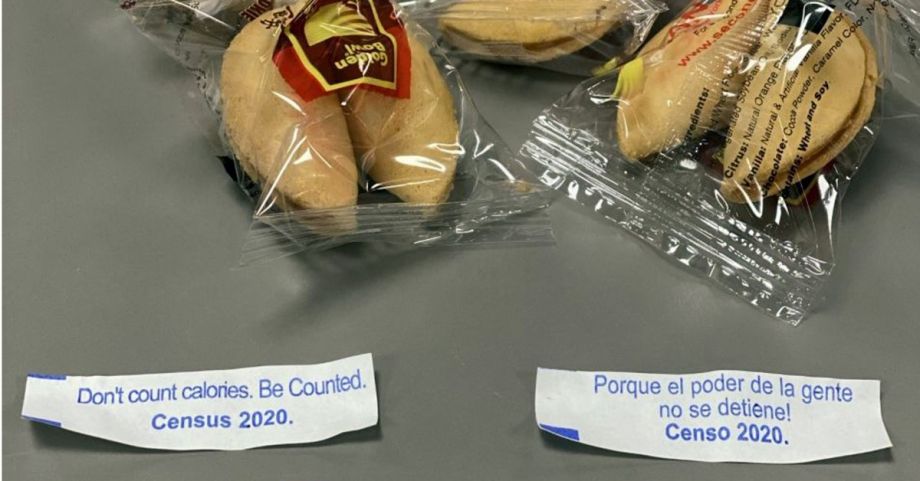 Cities Getting Creative With Census Campaigns

As concerns grow that the Census won’t be able to count everyone, some U.S. cities are finding creative ways to get their residents to complete the Census.

From texting and virtual phone banks to census advertising inside fortune cookies, cities from coast to coast are trying to ensure that all their residents are counted, so they don’t risk losing out on federal funding for the next decade.

In New York, an ad campaign encourages New Yorkers to complete the census through special fortune cookies with census messaging. Participating Chinese restaurants give away the cookies with messages such as “Don’t count calories — be counted.”

In Chicago, when COVID-19 put an end to in-person canvassing and group events for Census participation, the city teamed up with Chicago Cares to create a neighbor-to-neighbor initiative mobilizing volunteers in Census outreach. The initiative enables Chicagoans to text other Chicagoans and encourage them to participate in the Census.

Jenné Myers, the CEO of Chicago Cares, said in a statement that text messaging is an effective way for volunteers to get involved in Census advocacy efforts amid the pandemic.

“So far, our volunteers have sent over 170,000 text messages reminding Chicagoans to complete the once-in-a-decade count. It’s a safe, easy, and fun way for Chicagoans to volunteer right now and make a huge impact on the city we love,” said Myers.

The city is also deploying a mobile Census center that travels to food banks, mask distribution sites, and other events to provide residents with the Wi-Fi necessary to complete the Census. The neon green van reads “Make Yourself Count: Take a Second for Your City.”

The Campaign is looking to add more cities and volunteers.

”While Michigan is currently third in the country in our self-response rate, numerous Michigan communities are 20 percent or more below in 2020 participation compared with their response levels from 2010,” Michigan Statewide Census Director Kerry Ebersole Singh tells Click On Detroit. “That’s why we’re pushing for more volunteers to help us staff the census phone bank while they’re staying at home to help stop the spread of the COVID disease.”

Virtual phone banks are also being used in Orange County, California, and in Texas’ Rio Grande Valley, where there is a history of Black and Latino undercount in the U.S. Census.

Cities want the most accurate census count possible, because census data is used to apportion federal funding for things such as hospitals, schools and public works.

The issue is taking on additional urgency under the Trump administration, which — after more or less giving up on its insistence on adding a question about citizenship to the census — has taken steps that watchdog groups and Democrats say are attempts to undermine the constitutionally mandated count.

In late July, the White House announced it would exclude undocumented immigrants from being counted for the purpose of redistributing House seats, a move that faced three lawsuits within a single week.

Now, with the Trump Administration pressuring the Census Bureau to meet a federal deadline, the Bureau has announced it will stop counting September 30, despite the estimated 60 million households yet to be counted, the New York Times reports. — Nicolette White

After California Gig-Worker Ruling, Uber and Lyft Threaten to Leave

Uber says it will shut down in California for several months if a court doesn’t overturn a ruling that the company must treat its drivers as employees, CNBC reports.

Uber CEO Dara Khosrowshahi said Wednesday that “if the court doesn’t reconsider, then in California, it’s hard to believe we’ll be able to switch our model to full-time employment quickly.”

Lyft issued an even stronger statement, saying it would leave California entirely if the ruling was not overturned, The Verge reports.

In response to a lawsuit brought by California Attorney General Xavier Becerra, Judge Ethan Schulman ruled Monday that Uber and Lyft’s drivers are employees. Uber and Lyft argue that they are technology companies. Schulman said, according to a separate CNBC article, that “were this reasoning to be accepted, the rapidly expanding majority of industries that rely heavily on technology could with impunity deprive legions of workers of the basic protections afforded to employees by state labor and employment laws.”

On Monday, the same day that Schulman handed down his ruling, Uber CEO Khosrowshahi wrote in a New York Times op-ed that gig economy companies should be required to pay into benefits funds that would give drivers cash that they could use to buy their own health insurance or paid time off.

If Lyft and Uber are not successful in appealing the ruling, there’s still Proposition 22, a California ballot measure to be voted on this November that would re-classify Uber and Lyft drivers as contractors.

Illinois Gov. J.B. Pritzker and the state Department of Commerce and Economic Opportunity have allocated $46 million in emergency grant funding to support businesses across the state affected by the pandemic, according to WJOL. In the first round of these grants, priority was given both to businesses that were forced to shut down in the spring, and to those that sustained property damage during the protests earlier this summer.

The money will be divided into 2,655 emergency grants across 78 counties in Illinois. Funds from these grants come from the Business Interruption Grant (BIG) program, which received funding under the CARES Act. The first set of grants range from $10,000 to $20,000.

WJOL reports that of the businesses which benefited from the first ground of the BIG program grants, 25 percent are Asian-owned, 14 percent are Black-owned, and 11 percent are Latino-owned.

At a press conference, Gov. Pritzker said, “The initial focus of these grants has been on businesses that have been most severely impacted by COVID-19, those that were completely shut down in the spring, and those that are in COVID-impacted areas that experienced property damage amidst the looting and civil unrest in June.”

A large portion of the BIG program will help childcare providers as well as restaurants, salons, and other businesses.

Businesses can use the grants for working capital expenses including payroll costs, rent, utilities, PPE, safety training and technology.

Pritzker said his administration worked with the Department of Commerce and Economic Opportunity (DCEO) to ensure funds are spread along small businesses.

“Equity was a central focus of the program,” said DCEO Director Michael Negron at the press conference. “Half of the businesses receiving awards today in this round are minority-owned.”

“More than $24 million in grants will benefit businesses in zip codes that have been disproportionately hit hard by this pandemic,” said Negron. “Overall, this round of BIG grants will support businesses across 400 communities that were delivered to small businesses that needed it the most.”

Small businesses are considered a priority in the grant distribution. Business owners are required to prove annual revenue of $3 million or lower to qualify.

“I am committed to supporting communities that have long suffered disinvestment. Our effort to support families and revitalize our economy are ongoing and I intend to do everything in my power to alleviate the pain that COVID-19 is inflicting across Illinois,” Gov. Pritzker said. — Eddi Cabrera Blanco